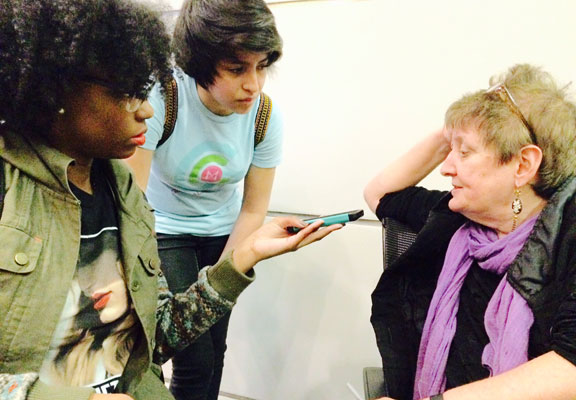 ‘I am pro choice because I am pro woman’

After interviewing Katha Pollitt about her new book on abortion rights, GlobalGirl Media reporter Ebony Marshall reflects on a society where young girls are not taught to embrace their own sexuality. When it comes to abortion, I am pro choice because I am pro woman. When people talk about abortion they rarely ever mention the woman behind the fetus. In the war between pro life and pro choice, she becomes practically nonexistent. But she’s the one that makes the arguments possible. It is the question of her morals, the shame of her lack of virtue, and her wonderfully unique ability to carry life in her womb or refusal to do so that sparks protest and debate. Why then is she irrelevant when it comes to the life form developing inside of her? The sides of pro choice and pro life refer directly to a fetus in a womb, however I encourage everyone to become pro woman as well and make women a more common factor in abortion discussion.

Recently, I heard Katha Pollitt speak about her new book, “Pro: Reclaiming Abortion Rights.” Did you know that 60% of abortion patients are mothers? I didn’t because the picture painted for me of women who want abortions include unready, unfit and irresponsible young adults who are barely taking care of themselves. While those people do exist, the majority are women who realize the burden and challenge another child will put on their family’s tight resources.

In her talk, Pollitt touched on the obsession with women and their virtue, which often times comes up in the abortion debate. There is an obsession with the status and definition of the sexuality of women, and it has been made very clear that whatever it is, it is something that we should not embrace. Sex before marriage, sex before adulthood, and even school dress codes all hinder women’s ability to embrace their sexuality. As a teenager it is very clear to me that sexuality is not to be thought of until one has come of age – after the body changes and the hormones and the confused feelings have already taken over a teen girl’s life. We are not prepared to embrace our own natural human condition. Humans procreate and have desires, but teens aren’t privy to the information.

For teens, sex is everywhere but that makes it more of a mystery because no talks about it and contraception is nearly unheard of. Only after a young woman’s virtue, or lack thereof, is unveiled and there is nothing more to obsess over, only then are the “exploits of promiscuity” discussed. For example, when a teen ends up pregnant there is a whole other world of criticism when she considers abortion, because the focus is solely on what will happen to the baby and there is no consideration of what should become of her should she become a mother.

The simplified aim of the pro-life argument is to stop the termination of innocent fetuses. But, the way to do this is not to protest Planned Parenthood and other reproductive rights resources. It is to give women more foolproof options. If a woman has access to contraception and plan B, there will be no pregnancy to make decisions on in the first place. Yes, the baby is important, but so is the woman. Shaming, imposing regret, and cutting off resources is not a way to lower abortion rates. That is counter productive, the key component is choice, not just for the baby but for the woman as well.

GlobalGirl Media is an award-winning organization that develops the voice and self-expression of teenage girls in underserved communities by training them to become digital media citizen journalists, turning up the volume of girls' voices around the world so girls can advocate for their perspectives and solutions to change.