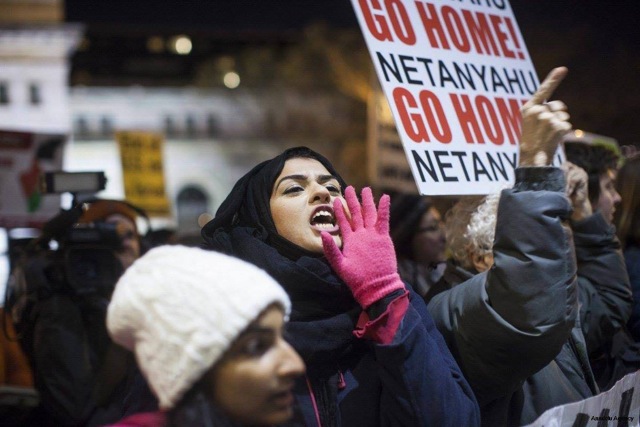 Amani al-Khatahtbeh, a veiled, Muslim, feminist, started her own online publication when she was in high school in New Jersey. “The most important thing for the movement,” she says, “is to take a step back and empower women to speak for themselves.”

NEW YORK (WOMENSENEWS)–At only 22 years old, Amani al-Khatahtbeh is the editor in chief of her own online publication, MuslimGirl.net.

The magazine “was launched from the bedroom of a high school girl that was fed up with the misleading misconceptions surrounding Islam,” reads the website.

A New Jersey native, al-Khatahtbeh now lives in Washington, D.C., where she is a media relations specialist at the American-Arab Anti-Discrimination Committee. She describes herself as “a human and civil rights activist and public speaker.” Her areas of focus include media, race, gender and politics.

This interview, for Women’s History Month, is part of a series that taps activists from the 1960s through today to showcase the diversity of those involved. It was conducted via email.

1. How do you describe yourself within feminism or the women’s movement? How do you label yourself? Muslim feminist? Feminist? Or do you stay away from such labels?

The basic tenets of Islam are inherently feminist, so identifying as a feminist goes hand in hand with my identity as a Muslim woman.

2. Some women of color describe the feminist movement as white, middle class and not sufficiently inclusive. Do you agree?

The Western feminist movement has always been alienating to women of color. I would argue that “feminisms” that disregard the intersections of race, class and gender are not only anti-feminist, but even uphold systems of oppression that feminism claims to defy. I think the most important thing for the movement is to take a step back and empower women to speak for themselves, rather than assuming their lived experiences and speaking for or talking over them.

3. Muslim, veiled and feminist. How do you respond to people who have a hard time fitting those three words together?

No one has the right to pass judgment on Islam or Muslim women if their only knowledge of either of them comes from Fox [News] or “American Sniper.” The whole premise of feminism is to empower women’s individual choices and autonomy of their own lives. It’s interesting how Western feminism has always been gung-ho about this concept unless it is applied to Muslim women. Not only does the misconception of Islam’s relationship with feminism reveal a very politicized and stereotypical image of Muslim women, but it also infantilizes us as though we are incapable of thinking or making decisions for ourselves. As a Muslim woman, my hijab is my feminism; both in asserting my authority over my body as well as defying post-9/11 Islamophobia, racism and stereotypical expectations.

4. As a Muslim woman, what are your priorities when it comes to women’s rights? For instance, today in the U.S. the abortion debate has become central in many feminist circles. Is it also one your top priorities at the moment?

On top of the issues directly impacting the women’s community in America, women of color also have to face problems disproportionately affecting them in ways that often become matters of life and death. At the moment, American Muslim women are alarmed by the recent spike in hate crimes that often target “visibly Muslim” women that wear headscarves. Additionally, the national conversation surrounding police brutality is of particular interest to Muslim women because militarization against communities of color is a shared struggle. Of course, American foreign policy often lands on the backs of Muslim women as we watch our tax dollars go towards our–or our allies’–droning, bombing and economically suffocating Muslim women and children abroad.

5. You are very active and vocal on social media where women are often targeted by trolls, some of whom threaten rape or death. What has been your experience online so far?

The Internet can be a very vitriolic place for women as it’s a space where we publicly defy the margins to which society relegates us. Though I’ve gotten used to brushing off online negativity, there have been times that it’s been so triggering it leaves me affected for days. I’ve been the victim of both rape and death threats, and they’re usually always racialized and somehow tied into my Arab or Muslim background. One of the common comments Muslim women receive when they’re speaking their mind online is, “You wouldn’t even be allowed to share these opinions if you were in your country! You’d be stoned!” as though we don’t belong and, ironically, in an attempt to keep shutting us up in societies that claim a moral high ground. This is part of the reason why I started MuslimGirl; to create a space where we can collectively assert our voices on important topics and where “Muslim Women Talk Back.”

BIO: Hajer Naili is a New York-based reporter for Women’s eNews. She has worked for several radio stations and publications in France and North Africa and specializes in Middle East and North Africa women in Islam. Follow her on Twitter @h_naili.