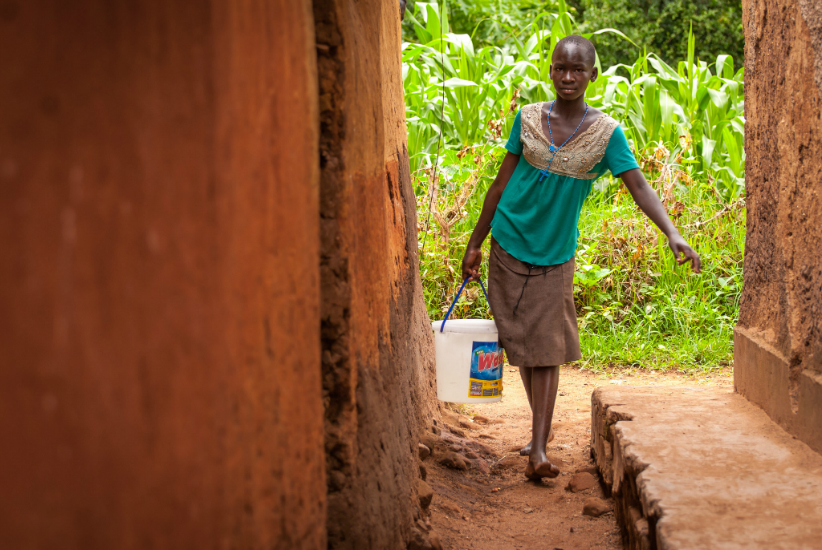 Watching your neighbors die because their too young mother isn’t able to find food for the family is a scarring experience.

In March 2013 when famine broke out in Uganda, we heard the neighbor’s children, 3 to 5 years old, yelling at their mother for food.  This was just one of the five families the father, Peter had. My neighbor, Babirye, was the youngest of Peter’s six wives. She was only 13 years old when they got married, too young to even be recognized by the law.

Babirye had a very small plot of land that she used to grow food for her children.  The food only lasted for a few weeks, and the children were hungry again.

Peter, who was 30, did not contribute anything for his children to eat. It was seen as Babirye’s responsibility to feed her entire family while Peter would only stop by her house when she had food to make for him. Morning and evening the children would cry for food. Some of the children were also feeling sick as malaria and fever had broken out in the family, but they could not take their medicine without food. Babirye was under a lot of pressure. Sometimes she slapped the children to force them to go to sleep without food. Babirye lied to the children to get asleep by saying, “If you don’t go to sleep right now, I will not give you food,” even though there was no food. The children slept through the day while Babirye tried to find food. Babirye was in a hopeless situation. On the third day without food, two of the three children woke up. The three year old had died in his sleep.

Even while suffering the loss of her child,  she had to host a burial. However,  she had no food to give the guests.

At the time Babirye was a 16-year-old girl, not even yet a woman.

Her 5-year-old child told me what had happened. I told my mother and she was compelled to contribute food for the remaining children.

The community supported Babirye with money to pay for the funeral and burial. Someone even helped pay for food for the funeral guests. With some of the remaining money, Babirye bought some cassava, which she mixed with millet and took to be ground. She brought back that food to her reaming children, but within a day, the food was finished. Babirye wanted to hang herself because the situation was beyond what she could control. The children grew small, felt sick and suffered a lot. Babirye’s family tried again to bring her back, but because her husband had already defiled her, they couldn’t.

I don’t know if anything different would have happened if Babirye was older. But I do know that it is not fair to make someone so young suffer so much. Babirye is sorrowful and she is alone with two young children. I fear for all of their safety. At any time her husband could come to the house, take whatever he wants or sell her property. He sometimes comes back and beats the children when he finds no food, even though he cannot provide any of the basic needs for the family.

It has only been recently that I’ve heard people talk about child marriage in my country. It still happens but the police have become stricter about investigating child marriage since Babirye’s child died. However, Babirye, still a young girl, is stuck with her husband and can’t leave. Where would she go? Her family won’t take her back since she’s been defiled.

In addition to stronger laws defending women’s and children’s rights, our community should create safe houses for young mothers and their young children. Only then will they have a hope of escaping the cycle of poverty our society has created for them.

Patsy Kisakye, 15, is a participant of WIL-Uganda and a student at Townside High School.