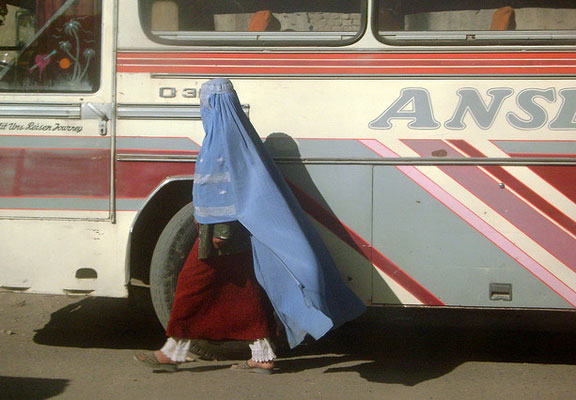 Forty percent of girls in Afghanistan are married before they are 18 years old, according to UNICEF, which means they do not finish their education, remain illiterate and puts them at increased childbirth related health problems. A bus ride home from school gives teen writer Arifa a direct reminder of the struggle of women and girls in her country. Not long long ago when I got out of my English class in the afternoon, I got on the bus to go home. There was one empty seat on the bus so  I sat there. After a few minutes an old, weak woman got on the bus.

She was wearing a long, dark red dress. Her face was dark and wrinkled, her lips were dry and she looked about 46 years old. She was carrying a child on her back. The girl looked about three years old and I assumed it was her granddaughter. I stood up and offered my seat to her and she thanked me.

When the person beside her got up to leave,  the woman asked me to sit beside her.  As I sat down, I asked her about the little girl. “Is she your granddaughter? She is pretty,” I said.

She said, “No, my dear. She is my daughter. She is two and half years old. Why do you think she is my granddaughter, my dear?”

She sounded as old as she looked, but her language was very kind, like my mother. I felt awkward having asked but after some minutes of silence she started telling me a story about herself, as if she understood the reason I asked her that question.

She looked out the window as she began to speak. “My name is Masum and I was born in a Khan family, the head of my village, 30 years ago.”

“All I remember is that my family hated me as evil hates an angel. I did not know the reason until one day my mother told me that when she was pregnant my father had wanted me to be a boy and was always telling people how his son will be like a king and will bring happiness to the village. But my birth ruined everything.”

She went on to describe how her father treated her. When she was four years old, she used to run to her father and say “Hi!” every day when he came home, but he would push her away or slap her on the face. It hurt and she would cry all night. But her grandmother told her that “every day is a new one.” She believed her, so she would start each day new, but the ends were always the same.  She told me how her father thought of her as a shame to him. He did not let her go to school and she was not allowed to study at home.

She said, “I would hide somewhere to read the book that a neighbor boy had given to me and was teaching me while I went out for about three hours a day to take the sheep to the hills for pasture. His name was Namath, he was going to school and was teaching me everything he studied at school. When I was thirteen, I was able to read any passage.”

One day she was reading the book that Namath gave her on New Year’s Eve, a book his uncle brought from Kabul, and her father found her reading. He slapped her so hard that her head crashed against the wall and bled. He wanted to know who taught her to read, but she would not tell him. So he beat her and he locked her in the room for three days. Her mother fed her once a day.

“I did not stop reading the book.” she said. “For the next five years, I read the books that I hid somewhere. When I was 15, my family forced me to marry a 34–year-old man and when I refused, they locked me in a room with him for a whole day. He raped me and beat me; I screamed and wanted help, but it seemed like the entire world was dead; nobody came to help me.

The woman had come to Kabul only for her father’s funeral.  She told me she did not understand why she was punished all the time, even though her mother told her it was only because she is  a woman. “My father left this world and me with all the disaster and pain in this world.  I always wonder to myself if it is a sin to be a woman or a daughter or a wife.

“If it is so, it has to be a great one because I have been punished and have suffered a whole life with a pain that never diminishes but becomes greater.”

I could feel that she wanted to cry out loud, but instead she cries in her heart. This is how women have been treated, to never argue with what others decide for them. No matter what the cost is, they just keep doing what their grandfathers did. These traditions ruin many lives.