The Jacksonville, Fla., resident accepted a plea deal in the same court district in Florida with the same prosecutor as in the shooting of Trayvon Martin. Both shooters claimed self-defense. Martin’s killer was acquitted.

WASHINGTON, D.C. (WOMENSENEWS)–Stand Your Ground laws, now on the books in nearly half the states, are helping many defendants avoid felony convictions by claiming self-defense. Florida’s version did not help a woman who shot a gun and hurt no one: Marissa Alexander

Alisa Bierria, a member of a nationwide group, Free Marissa Now, and the associate director of the Center for Race and Gender at the University of California at Berkeley, says the case of Alexander sends a chilling message to battered women and their advocates.

"The terror that I think all women in this country should feel is that her case was extreme," Bierria said in a recent phone interview. "She caused zero injuries, she fired a single shot, and in a state that prioritizes self-defense."

Even so, Alexander was originally convicted and sentenced to 20 years in prison, but the conviction was thrown out on appeal. She faced a new trial–and a prosecutor who wanted to put her away for 60 years–when she took a plea and a reduced sentence during negotiations in November.

Her original case unfolded around the same time as George Zimmerman’s successful defense in the 2012 killing of unarmed Trayvon Martin in the same court district in Florida and with the same prosecutor.

While Zimmerman was able to successfully use the Stand Your Ground law to justify his killing of Martin, whom he said was a threat, the law didn’t help Alexander. She discharged her gun in a dispute in 2010, she said, to scare off her abusive husband, whom she said had tried to choke her and in other ways was harming her and threatening to harm her.

Supporters have questioned the legal system’s treatment of Alexander, who is black and female, and compared it to that of Zimmerman, who is white and male.

‘She Could Have Fled’

No one was injured in the Alexander shooting incident, police records showed, but in her first trial, Alexander, now 34, was convicted and then sentenced to 20 years in prison after prosecutors said that she hadn’t behaved like someone who thought her life was endangered. In other words, the court seemed to say Alexander should have fled, even though she said that when she tried to, she got to her car in her garage, she found that the garage was locked and realized she did not have her keys.

According to Alexander, Gray had accused her of having an affair and questioned whether their 9-day-old baby was his. Alexander said she locked herself in the bathroom until he broke through the door and shoved her to the floor. Once she was able to get free, she said, she tried to leave through the garage but could not.

Court documents filed by Alexander’s lawyers said she fired a warning shot from a registered gun after returning to the house, where a few minutes before her husband Rico Gray had choked her, yelled at her and threatened to kill her after reading a text message from her ex-husband.

The prosecutor and ultimately a jury, saw it differently and did not buy Alexander’s argument that she believed she was in imminent danger, despite sworn statements, including from Gray, about his history of domestic violence.  And according to court documents filed by one of her lawyers, at the time of the Aug. 1, 2010, incident that landed her in prison, Alexander had a protective order against Gray that prevented "violent contact," by Gray.

Alexander’s conviction was overturned in 2013, after she had spent nearly two years in prison.

As she was heading for a second trial in December, she agreed to a plea deal similar to what the prosecutors had offered before the trial that led to her conviction. She pled to three assault charges, and is expected to serve two more months in prison, with a possible release date in early 2015, depending on what the judge finally decides.

The plea deal came soon after the judge said he would allow testimony that Gray had abused women in the past. One of Alexander’s lawyers, Bruce Zimet, told the Associated Press, said the plea deal was "a means of getting the case behind her."

In line with that Bierria, of UC Berkeley, said she understood Alexander’s decision to accept the plea, which guaranteed that she would soon be able to be reunited with her young children.

"I think the first thing is that we want to be really clear we stand with Marissa, we understand why she made the choice she made," said Bierria. "She is thinking about her children; she wants to make sure she is available to them. It makes a lot of sense to take this very unjust plea."

Still the case casts a pall.

"There are a lot of Marissa Alexanders out there," says Cindene Pezzell, legal coordinator for the Philadelphia-based National Clearinghouse for the Defense of Battered Women.

Prosecutor Angela Corey declined to discuss the case, but her spokeswoman Jackelyn Barnard offered this via email:

"It should be noted that no one ruling prompted any decision in this case. This case was handled like any other case in this office. The State Attorney’s Office has been actively negotiating with Ms. Alexander’s defense counsel for more than a year."

While not commenting on the specifics of the Alexander case, Pezzell, of the National Clearinghouse, said battered women face special challenges to their credibility. She said courts often place added responsibility on someone who says she is battered, inferring somehow from her failure to escape that she is at least partly responsible for what happened to her.

Juries, she said, often "incorrectly adhere responsibility where it doesn’t belong. ‘You knew this guy was dangerous, why didn’t you leave,’" Pezzel said is the often-unconscious view juries have of women who eventually kill or injure partners who have abused them for years.

Some states without Stand Your Ground laws have laws or court decisions that require someone who thinks his or her life is at risk to retreat from the conflict unless that is impossible. This legal doctrine, known as a "duty to retreat" often gets assigned by juries to female defendants accused of murder or assault, regardless whether it is part of that state’s law, said Pezzell.

"That is a main barrier for battered women defendants claiming self-defense," Pezzell said.

Bierria, at UC Berkeley, said she believes the Alexander case is another example of what many advocates for battered women have long believed: that the judicial system in the U.S. is often harder on female defendants than on males.

And the legal system often does not allow defendants who say they have been battered to provide evidence of that history, even though in Alexander’s second trial, that was going to be allowed by the judge.

"There is a lot of work to do to demonstrate that they are acting in self-defense," said Bierria. "The legal system is set up to look at a very distinct moment of assault, not the history of assault."

The cost of self-defense also can be a barrier to battered women who are accused of crimes.

Bierria said that Alexander has racked up about $250,000 in expenses, even with a legal team that is working pro bono, with help from the blue chip law firm Holland and Knight, and earlier in the case, from Michael Dowd, a New York lawyer with extensive experience in representing battered women. A defense fund is raising money to cover other expenses Alexander has incurred.

"To launch a first class defense is very expensive," said Bierria. Even if the lawyers’ time is free, the associated costs of paying expert witnesses, ordering transcripts and funding travel to Florida can be substantial.

And women who say they are battered and do not gain the public attention that the Alexander case has generated, face a highly difficult challenge to afford a defense team. 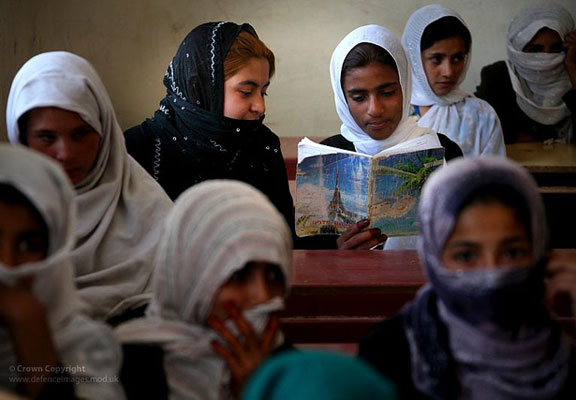 An Afghan Girl Dreams Of Books