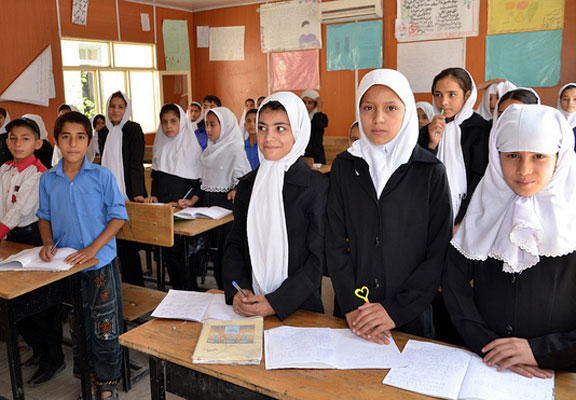 Teen writer Shogofa Az wants Afghans to stop segregating themselves in Pashtun, Hazara, Shias and Sunnis. “Respect me as a human and I will respect you as a human,” she writes. Responsibility for national unity belongs to everyone in a society. The only thing that can destroy it is discrimination. Even at our Kabul University students have been fighting because of ethnic conflicts, forcing the university to close twice in the last two years.

This last year it closed for two months due to fighting between the Shia and Sunnis and languages. I think the people fighting are not very smart. They should not be thinking: “This person is Tajik, this person is Hazara, this person is Pashtun.”

Students come from many different provinces and they fight about what language to speak. Besides our two national languages – Dari and Pashto – we have 30 regional languages!

If we all said this, we would have unity. Not only in one country, but around the world.

We are burned out from the situation in our country. Everyone thinks all the people of Afghanistan are the same, but we are not. We have bad people and we have kind people. But I think every single person wants unity and peace.

Who will tell this to our elders? Our presidential candidates mostly want power. But the new generation is thinking bigger than the older generation. We see the world with more open minds. My generation is realizing that we achieved nothing from war and violence. We suffer from all the corruption and bribery in education and government. We see that we must change. We have experienced all these problems. We know how much it hurts.

Although we can serve our county wherever we live, we have many uneducated people who care about making money more than about how to help others. I really appreciate a human who works from the heart and tries his or her best, a person who does something, not just puts out slogans.

Making national unity is not only our own responsibility. Foreign nations are also responsible. I don’t want foreign countries to just give us money, or medicine or build streets for us, because all the fighting in Afghanistan is because of money and power. The money given by countries to Afghanistan does not go to people who really need it.

If foreign countries really want to help, they should send us doctors, teachers, road engineers and building engineers to give us training. Teach us the skills. We need educated people and a good education system in our country. Then my generation will help millions of other people.

Everyone discusses national unity, but they don’t offer solutions. I want people to think of solutions like mine – removing discrimination. Unity belongs to people and if we agree to remove discrimination, we can have peace.

Apple and Facebook Put the Biological Clock on Ice

When Women Stay Home, Dem Candidates Might as Well