Other victims from Taiwan, China, the Philippines, Indonesia and East Timor were also forced into sexual slavery. Sometimes women were required to provide sexual service, which could be defined as rape, for up to 50 soldiers per day.

HEMPSTEAD, New York (WOMENSENEWS)–In recent years members of the U.S. Korean community have erected seven memorials here to the so-called comfort women; two each in New York and New Jersey, and one in California, Virginia and Texas.

Korean victim Kim Hak Soon, then 67, was the first former comfort woman to speak out in 1991. Because of her courage and the seven memorials, those in the United States who do know about the young girls and women forced into sexual slavery in brothels by the Japanese military during World War II generally know only about the abuse of Korean girls and women.

However, while Korean women constituted the largest group, they were not the only ones to suffer in this way.

Other victims from Taiwan, China, the Philippines, Indonesia (including Dutch citizens) and East Timor were also forced into sexual slavery in so-called comfort stations run by and for the Japanese military. Sometimes women were required to provide sexual service, which could be defined as rape, for up to 50 soldiers per day.

This was documented through panel discussions and a remarkable new Taiwanese film shown at conference last week at Hofstra University about war atrocities and sex trafficking in East Asia.

A common thread among victims of military sex crimes is an unwarranted sense of shame that surviving victims feel, accompanied by a reluctance to speak out or share their experiences with their families. This is something we know from studying the sex crimes perpetrated by the Nazis in World War II.

Like their counterparts in the Japanese military in East Asia during World War II, the Nazis and their collaborators also brutally used female sex slaves. Women were forced to serve in brothels in Nazi concentration camps or to provide sex for some Nazi officers. So-called medical experiments left some women sterile and forced nudity, which is now considered a crime against humanity, was customary. Rapes were randomly committed, often resulting in the subsequent murder of the victim.

The Taipei Women’s Rescue Foundation seems to have found ways to alleviate some of the lifelong suffering for some of these victims of the Japanese military.

"Song of the Reed," a 73-minute film produced by the Taipei Women’s Rescue Foundation in 2013 and shown at the conference with English subtitles, highlights the stories of five Taiwanese survivors of sexual slavery.

Their caseworkers lovingly provide them with ways to overcome their post-traumatic stress syndrome and to survive with human dignity. In one of the most touching parts of the film, the elderly women were granted their wishes to be whatever they wanted for one day. Survivors who had spent so much of their lives suffering during and after World War II had their dreams come true, under the supervision of the young caseworkers from the Taipei foundation. One woman temporarily became a flight attendant, one a singer and another presented a hand-knitted scarf to the president. A survivor who had died during the filming was memorialized by her friends in the foundation’s program.

Shu-Hua Kang, executive director of the Taipei Women’s Rescue Foundation, came to the United States especially for the conference, accompanied by Ching-chin Cheng, who works with her at the foundation.

To her knowledge, there are now fewer than 75 comfort women still alive, some 50 of them in Korea, Kang said in an interview. She estimates that 300,000 women had been sexually violated by the Japanese military. Her foundation works with victims of current domestic violence and human trafficking, as well as caring for and memorializing the comfort women. It has also created the Women’s Rights Museum in Taipei, to honor the memories of so many of the victims of sexual slavery during World War II who have died.

Estimates of the numbers of comfort women vary. Pyong Gap Min, a sociology professor at Queens College and the CUNY Graduate Center, presented the conference with a lower estimate of between 80,000 and 200,000, mostly Korean women.

The subject of comfort women doesn’t come up often in Japan. The government prefers to deny it and most young people there don’t know this history.

Nevertheless, two Japanese women who traveled to the conference are dedicated to telling the story. Yoko Shiba works through the Support Group for Taiwanese Survivors of Japan’s Military Sexual Slavery, and Kimoko Kawami works through The Association for Uncovering the Facts of Sexual Violence Committed by the Japanese Military in Shanxi Province and Working Together with Survivors. They would like to see a museum about comfort women built in Tokyo.

Teen Recruit to Al-Qaida Branch in Syria Wants Out 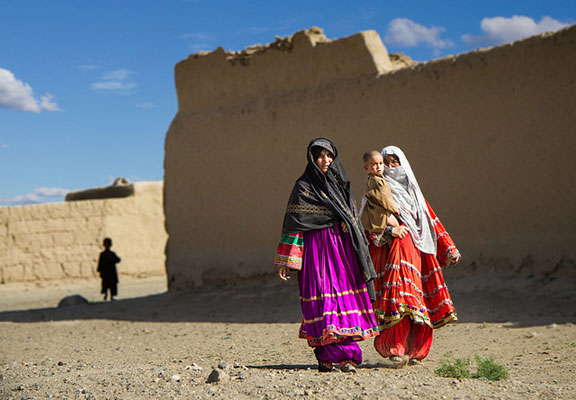 Give Afghan Women Credit For Their Strength