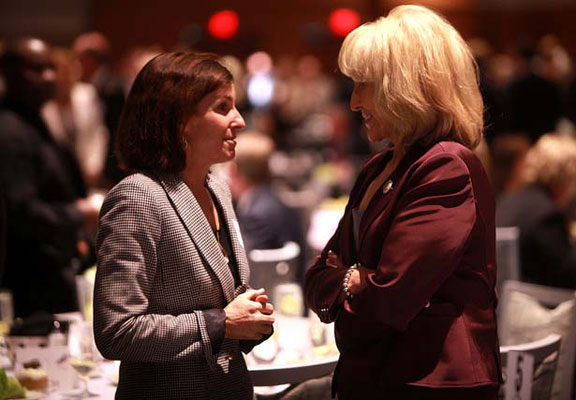 Flying combat missions or directing platoons dispels voters’ doubts about female candidates, says one analyst. Martha McSally and Wendy Rogers both claim that advantage. First in a series on women tapped by the GOP’s Project GROW.

(WOMENSENEWS)–Martha McSally, a former Air Force pilot in Afghanistan and Iraq, is making a second bid in the high-profile race for the congressional seat in Arizona vacated by Gabrielle Giffords, a leading gun control advocate who suffered severe injuries in a 2012 assassination attempt.

In addition to being the first woman to command an Air Force fighter squadron, McSally sued Defense Secretary Donald Rumsfeld in 2001 for requiring female troops to wear an abaya outside military bases in Saudi Arabia. Her argument that the traditional robes sent a message that women are subservient to men convinced Congress to end the requirement.

In its bid to boost its low numbers of women in the U.S. House of Representatives, the GOP’s Project GROW (Growing Opportunities for Women) has been grooming female candidates throughout the country, including McSally and Rogers, to win key races later this year.

Defense Secretary Chuck Hagel’s announcement last week of plans to dramatically shrink the Army, close military bases and make other savings could raise the electability of McSally and Rogers, both military veterans in a state deeply dependent on Defense Department spending.

If the two women win, they would become the first two Republican female combat veterans elected to Congress. If McSally wins over her male Democratic opponent she will add another woman to the U.S. Congress, where female representation is about 19 percent. Both would help Republican’s languishing female ranks.

Military service has helped men get elected since the days of George Washington, said Debbie Walsh, director of the Center for American Women and Politics of the Eagleton Institute of Politics at Rutgers University in New Brunswick, N.J., in a recent phone interview.

“Indeed, military service may be a more important credential for female candidates than male candidates,” Walsh said. “Flying combat missions or directing platoons in areas where lives are in danger dispels voters’ doubts about whether female candidates are tough enough to tackle the difficult issues and opposition they will face in Congress.”

In 2012, 88 veterans were elected to the House of Representatives, including seven male Republicans and two female Democrats who had served in Iraq, reports the Congressional Research Service.

“Voters respect female candidates like McSally and Rogers who have served in key positions in the military because the armed services have had thick glass ceilings,” said Seth Lynn, director of the Center for Second Service of the Graduate School of Professional Management of George Washington University in Washington.

Sixteen percent of commissioned officers were women in 2010, up from 4 percent in 1973, according to the Washington-based Pew Research Center, a nonpartisans “fact tank.” Since the United States went to war in Afghanistan in 2001 and Iraq in 2003

about 2.5 million Americans have been deployed, including 400,000 women, according to the Department of Defense.

“Veterans have skills in planning, leading teams and evaluating outcomes, which are useful on Capitol Hill,” said Lynn, whose center trains veterans to run for political office and offers educational programs to prepare veterans for policy and other positions in the government. “Many of the most important issues facing our nation involve the military, so veterans can provide a needed perspective on everything from new technology to medical care for those injured in battle.”

However, military experience isn’t enough to get veterans elected, Lynn said in a phone interview. They must use their background as a backdrop while focusing on issues directly tied to voters’ greatest concerns.

McSally and Rogers have followed Lynn’s advice, stressing how their military experience and contacts will help Arizona maintain its edge in jobs in the aerospace and defense industries.

Arizona ranked fourth in aerospace payroll ($14.99 billion) and had more than 1,200 aerospace and defense companies, found a 2012 study by Deloitte Research, a global firm that does studies of various industries.

In her bid for Giffords’ former seat, Martha McSally faces Ron Barber in a rematch that was very close last time. Barber is Giffords’ district director who was also wounded in the shooting. Last time he won against McSally by only 2,500 voters, a tally so close that it took almost a week for Barber to be declared the winner.

McSally, a graduate of the Air Force Academy and the National War College, retired after 22 years in the military.

“I know how to get things done and lead teams,” she tells groups on the campaign trail. “As an A-1-squadron commander, I had to make sure my group was prepared to be deployed anywhere in the world in 24 hours.”

McSally also mentions that she has a master’s degree from the JFK School of Government at Harvard University in Cambridge, Mass., and was one of only seven active military officers to serve as a legislative fellow to a U.S. senator (Jon Kyl, an Arizona Republican). She also led a team of Army, Navy, Air Force and Marines to plan a counter terrorism policy mission in Africa.

These credentials may be important to Arizona’s military contracts. The war in Iraq was a boon to Arizona. Annual Department of Defense contracts in the state rose steadily to $13.4 billion in 2012 from $7.56 billion in 2003, creating about 153,000 jobs.

The 2nd district is home to Fort Huachuca, the largest unmanned aerial system training facility in the world, and Monahan Air Force Base, which has the Air Force’s only active duty rescue wing for combat search and rescue.

To refute Barber’s claim that she was part of the GOP’s war on women, McSally cites her record as an advocate for women in the military and her victory in ending the abaya requirement in Saudi Arabia.

The son of an airman, Barber spent 32 years working at the Arizona Department of Economic Security’s Division of Developmental Disabilities, eventually becoming director. He and his wife have also managed Toy Traders/Stork’s Nest, a small business in Tucson, for 22 years. Barber became Giffords’ district director in 2007.

Barber landed a seat on the powerful House Armed Services Committee, where he co-sponsored the GI Bill Tuition Fairness Act of 2013, which allows veterans to attend state-run higher educational institutions at in-state tuition rates regardless of their residency. He also co-sponsored a bill to allow the Veterans Administration to provide counseling and treatment for victims of military sex trauma.

During the 2012 race, McSally had a difficult time raising funds. But for this rematch, she has raised $394,881, the highest total of any candidate for political office in Arizona during the third quarter of 2013. Barber raised $318,585 in that same time period.

In December, Barber and Sinema, the first openly bisexual representative elected to Congress, were named to the Frontline Program of the Democratic Congressional Campaign Committee, which provides funds to vulnerable Democrats in House races.

Although Democrats have won the seat in the last five elections, Republican prospects have improved. Mitt Romney narrowly defeated President Barack Obama in this district in 2012.

In her second run, Wendy Rogers hopes to unseat Democrat Sinema, who is a lawyer.

Rogers, who spent 20 years in the military, has vowed to protect jobs at Luke Air Force Base, which has been training pilots since World War II and is now the world’s largest F-16 training program, generating more than $2 billion in statewide economic activity a year.

Protecting jobs at Luke will be more important in the years ahead because the F-16s are scheduled to be eventually replaced by F-35s. In August 2012, Luke beat out 200 other bases across the country for an F-35 training program, which created 1,000 jobs in the Glendale area.

Like Barber, Sinema supported the GI Bill Tuition Act. The granddaughter of a World War II vet and the sister of a Navy gunner’s mate, Sinema opposed legislation to reduce the size of the National Guard in Arizona. Since 2002, over 12,000 members of the Arizona National Guard have been deployed; 150 members are currently serving.

Social issues are also expected to play a major role in the campaign. Sinema has a 100 percent rating from Planned Parenthood Action Fund and is a member of the Congressional Military Sexual Assault Prevention Caucus.

Rogers, who manages a property inspection company with her husband, has been married for more than 30 years and has two children, is expected to emphasize her 100 percent anti-choice rating, support for repeal of the Affordable Care Act and opposition to stricter gun control laws.

But first, Rogers must defeat Andrew Walter, a former National Football League quarterback and Vernon Parker, the former mayor of Paradise Valley, in the Aug. 14 primary.

Rogers lost to Parker in the 2012 primary by 800 votes and Parker went on to wage a bitter losing battle against Sinema. Parker called her an “un-American hippie” and denounced her for opposing two voter referenda to ban same-sex marriage and civil unions.

Sinema won by 10,000 votes (4 points). The November race is expected to be close because there are equal numbers of registered Republicans, Democrats and Independents in the newly created district, which includes Tempe and parts of Phoenix and Mesa.

Victories by these women could help the GOP address its female scarcity problem. The number of female Republicans in the GOP-controlled House of Representatives is now 8 percent and has never exceeded 10 percent, while the percentage of women in the Democratic caucus is now 29 percent, up from 7 percent in 1992.

Would you like to Send Along a Link of This Story? https://womensenewsp.wpengine.com/story/campaign-trail/140302/in-arizona-gops-female-duo-packs-combat-cred 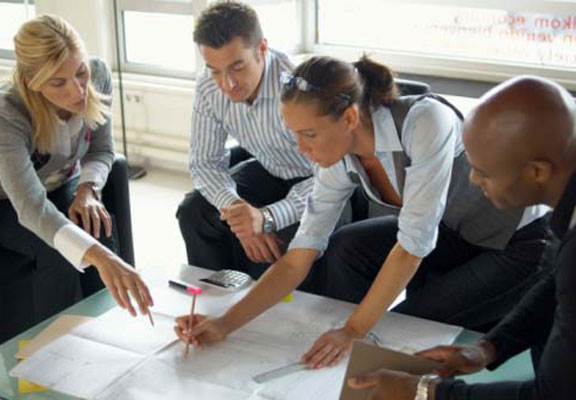 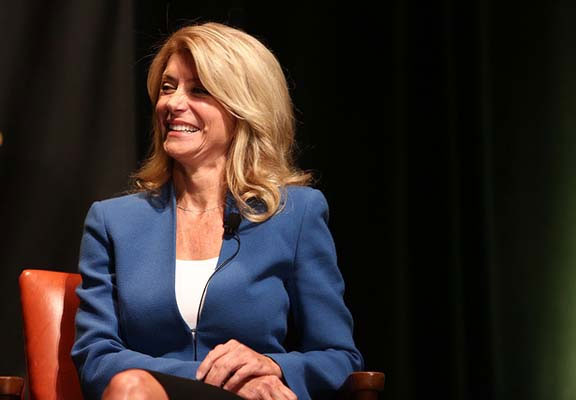