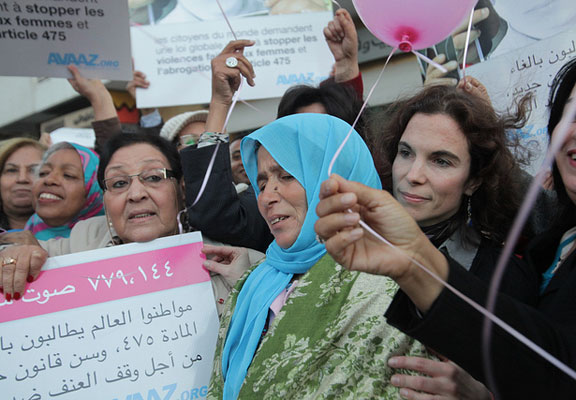 Morocco is aiming to toss out part of its penal code that allows rapists who marry their victims to go free, lawmakers told Al Jazeera, the TV news network reported Jan. 8. The Commission of Justice, Legislation and Human Rights, part of the Moroccan parliament’s lower house, met and voted unanimously to repeal the provision of Article 475 that allows a man who rapes a minor to go free if the victim marries the assailant. The controversial law that has existed for decades came under fire after the death in 2012 of Amina Filali, a 16-year-old who killed herself by drinking rat poison. Her death forced lawmakers to address the issue after public outcry drove Moroccans into the streets.

U.S. Attorney General Eric Holder is recognizing the marriages of more than 1,000 same-sex couples in Utah that took place before the Supreme Court put those unions on hold, The Washington Post reported Jan. 10. Holder’s action will enable the government to extend eligibility for federal benefits to these couples.

A team of female commandos are being recruited to protect women from rape in the streets of Delhi, India, the Daily Mail reported Jan. 9. About 5,000 female rickshaw drivers will also be employed to help make women feel less intimated when traveling.

Vermont state senators introduced a bill Jan. 7 to officially decriminalize abortion in the state and recognize a woman’s right to have an abortion, RH Reality Check reported Jan. 8. The bill, S 315, would repeal old Vermont statutes still on the books that criminalize performing abortion or advertising about abortion services.

New Jersey‘s Assembly approved a bill that requires employers to make reasonable accommodations requested by a pregnant employee on the advice of her physician so she can continue to work, Bloomberg Law reported Jan. 7. The measure has yet to be signed by Republican Gov. Chris Christie. If not signed by Jan. 21, the legislation will not become a law.

Saturday Night Live added a new African American woman to its cast, Sasheer Zamata, along with two other black female writers, LaKendra Tookes and Leslie Jones. CNN reported Jan. 7 that Zamata will be the first African American female in the show’s cast in six years.

Five members of an organized crime gang who brought 44 women from Hungary to the United Kingdom to work as prostitutes have been jailed, The Guardian reported Jan. 8. The men have received sentences ranging from three to six years of imprisonment.

The state Assembly in New Jersey is voting on the possibility of making female genital mutilation on minors illegal, The International Federation of Gynecology and Obstetrics reported Jan. 7. Members of the state Senate have already approved the planned legislation, which was originally put forward by the AHA Foundation, an organization established by Ayaan Hirsi Ali.

Law enforcement agents in New Jersey have redoubled efforts to fight what they worry could be one of the biggest menaces to come with next month’s Super Bowl: sex trafficking, the Associated Press reported Jan. 6. Hundreds of thousands of visitors are expected to descend on New Jersey for the Feb. 2 football game. Many believe the state’s sprawling highway system, proximity to New York City and diverse population make it an attractive base of operations for traffickers.

Apple pledged to diversify its almost entirely white male board to include women and minorities, Bloomberg News reported Jan. 6.

Tunisia‘s national assembly voted Jan. 6 to enshrine gender equality “without discrimination” in its draft constitution, AFP reported. “All male and female citizens have the same rights and duties. They are equal before the law without discrimination,” states article 20 of the text.

The Senate confirmed Janet Yellen as the next leader of the Federal Reserve, placing her in charge of ensuring that the nation’s economy makes a full recovery, The Washington Post reported Jan. 6. Yellen is currently the second-in-command at the Fed and is slated to take the helm on Feb. 1.

As Republicans in the House of Representatives are looking to make 2014 another banner year for anti-abortion laws, a panel made up exclusively of men on the House Judiciary Committee held a hearing on a bill that would deny tax subsidies to women and small businesses who purchase health insurance plans that include abortion coverage, The Huffington Post reported Jan. 9. The bill only makes an exception for rape and incest victims and women who would die without abortion care, which opponents say could prompt the IRS to audit any woman who claims one of these exceptions.

A few days earlier, on Jan. 6, a panel of the 5th U.S. Circuit Court of Appeals in New Orleans was scheduled to hear arguments over a ruling declaring as unconstitutional parts of Texas‘s 2013 law restricting abortion, the Associated Press reported. Planned Parenthood sued to block two provisions. One requires doctors to have admitting privileges near where the abortion is performed. The other restricts how doctors administer abortion-inducing drugs. See Women’s eNews‘ reaction story, “Judge’s Abortion Remark Stirs up Twitter Taunts.”

In addition, new abortion regulations adopted by Alaska will prevent Medicaid from covering elective abortions starting February, JuneauEmpire.com reported Jan. 7. Abortion will be funded by Medicaid only under certain medical conditions or if a doctor can certify that the pregnancy was caused by rape or incest or that the pregnancy would put the woman “in danger of death.”

The number of employed women 16 and over declined by 20,000 from November to December 2013, according to data released by the Bureau of Labor Statistics, CNS News reported Jan. 10. The number of women who are not in the labor force climbed to a record high of 55,028,000.

A 10-year-old girl wearing an explosive suicide vest was stopped by Afghan police as she tried to carry out a deadly attack in the southern province of Helmand, CNN reported Jan. 6. The girl is thought to be the sister of a prominent Taliban commander who sent her on the mission.

A lawsuit was filed on behalf of three former inmates of the Grainger County Detention facility in Tennessee, alleging that the three women were subjected to rape and other coerced sexual conduct during their stays at the jail, ABC reported Jan. 9.

A brain-dead Texas mother is being kept alive against her family’s wishes in order to comply with a state law that prevents doctors from withdrawing life support from pregnant women until they give birth, The Guardian reported Jan. 6.

The Australian organization that provides data on graduate salaries has removed gender-based information because of concerns it was being misconstrued in stories about pay disparity, The Guardian reported Jan. 7.

Former Republican presidential nominee Mitt Romney said that his health care reform law in Massachusetts included birth control in insurance coverage but he opposed it in President Barack Obama‘s law because only states should be able to grant those rights to women, the Raw Story reported Jan. 5.

Violent crimes against women in Afghanistan reached an unprecedented level of brutality in 2013, an Afghan human rights watchdog announced, Russia Today reported Jan. 4. The attacks on women intensified with a 25 percent surge in cases from March through September.

Steubenville rape convict Ma’lik Richmond, who at the age of 16 was “found delinquent” in the rape of a 16-year-old girl in Steubenville, Ohio, is out of juvenile detention three months before his one-year sentence is up, WTOV 9 reported.

South Australian Liberal Sen. Cory Bernardi denied holding far-right views after writing a book describing those who are pro-choice as being “pro-death” and suggesting children raised by single parents are more likely to be promiscuous and law breakers, The Guardian reported Jan. 5. His new book, “The Conservative Revolution,” also argues against other “non-traditional,” families including step-families and same-sex families, and warns that Red Cross-style breakfast programs for children remove parental responsibility.

Sen. Kirsten Gillibrand last year raised $2.2 million – about half of it from New Yorkers – for the “Off the Sidelines” political action committee that she set up to help Democratic female congressional candidates run for office, Newsday reported Jan. 5. So far only $351,000 has been used for 35 women. That leaves $984,754 in the bank at the start of a big mid-term election year this year, and that’s before she raises more money.

A study published this month by the journal Obstetrics and Gynecology found that showing ultrasound images does not alter the decisions of the large majority of women who are certain that abortion is the right decision.

A court in France rejected a challenge to the country’s controversial face veil ban law and sentenced a woman for flouting it and insulting police, Voice of America reported Jan. 8. The court in Versailles fined Muslim convert Cassandra Belin 150 euros (just over $200) and gave her a one-month suspended sentence for wearing the face-covering niqab in public and for insulting police who ticketed her.

White women in Britain are more likely to develop cancer than their South Asian and black counterparts because they drink more and have fewer children, a new study suggests, The Telegraph reported Jan. 8.

Lovely Warren, Rochester‘s first female mayor, was sworn in Jan. 4, ABC reported Jan. 5. For many of the people at the ceremony at the Rochester Auditorium, it was about witnessing history.

The abortion rate in New Zealand has declined to a 20-year low since fewer women in the country, especially teens, opted for the procedure, the International Business Times reported Jan. 6. The drop has been attributed to the wider use of contraceptives, better sex education and lessons from real-life experiences on reality TV. In 2012, the number of abortions was 14,745 compared to 18,382 in 2007.