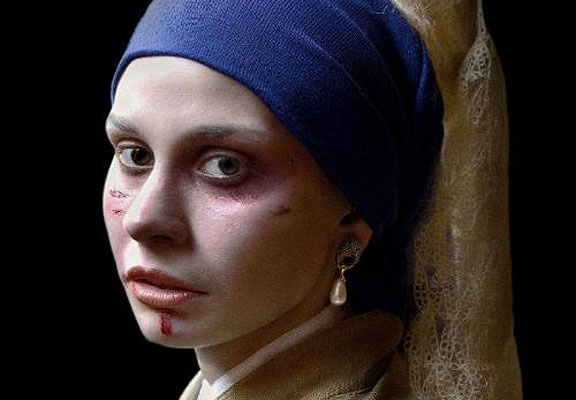 ISTANBUL, Turkey (WOMENSENEWS)–The girl’s wide eyes gaze out expectantly from beneath her blue-and-gold turban-style headdress, a single teardrop pearl glimmering in her ear. The photograph is a near-match for Johannes Vermeer‘s famous painting, “The Girl With a Pearl Earring,” except for one thing; cuts and bruises mar the subject’s eyes, cheeks and chin.

Turkish artist Derya Kilic‘s recent photography exhibition “To Know, To See . . . ,” which closed in mid-January after a month at the Macka Sanat Galerisi in Istanbul, confronted viewers with a series of well-known figures — women painted by the likes of Salvador Dali, Edvard Munch, Leonardo Da Vinci and Gustav Klimt, each bearing the marks of violence on their faces and bodies.

“I thought if I used the famous paintings, people could look at my photos and see violence as something that happens to a woman that they ‘know,'” Kilic told Women’s eNews. “I wanted to show that violence is not just a problem of poor women, and not just today’s issue. Violence is an issue for every woman, in every place and in every time period.”

Reported incidents of domestic abuse and violence against women in Turkey increased by more than 66 percent from 2008 to 2011, according to a report last year by the parliamentary Human Rights Commission. Other studies indicate that upwards of 40 percent of women in Turkey have been victims of domestic violence.

“Violence against women is such a part of daily life in Turkey that people get used to seeing such cases in the news; they lose their sensitivity to it,” Selda Asal, another Istanbul-based artist, told Women’s eNews.

Activist Arzu Yay, a volunteer with the Mor Cati Women’s Shelter Foundation, cautions that artistic representations of abuse can “aestheticize violence” as easily as can media coverage. The Turkish press has been criticized for both normalizing and sensationalizing domestic violence, focusing on lurid details and even sympathizing with the aggressor.

“The focus on images of the abused also means we end up talking about violence as something that is just physical and separate from us,” Yay said. “But violence is also emotional, mental and financial. And it’s not just ‘other’ women who are victims; violence and inequality affects us all.”

Both Kilic and Asal, and the other artists interviewed by Women’s eNews, emphasized that Turkey is not exceptional in its violence problem.

For part of her six-segment video project “Restore Hope,” which has been shown in Istanbul, Berlin, Belgrade in Serbia, Stockholm, Sweden, and other cities, Selda Asal traveled around both Turkey and Sweden to explore the lives of what she calls “emotional refugees;” women who have fled violence, and in some cases, escaped death. Filming at shelters, she captured the hands, feet and other anonymous features of the women, combining this footage with drawings she encouraged the women to make about their lives. Before shooting, she “changed around the women’s rings” because people in their families might recognize them from that, Asal said.

Artist Sukran Moral is another Turkish woman wrestling with the problem of violence through her work, often in shocking and controversial ways. Her installation piece “Family Night,” for example, places a screaming female skeleton at the end of a table set with fine china inters. Moral has said “Family Night,” which she debuted at her solo show at Istanbul‘s Yapi Kredi Kazim Taskent Art Gallery in 2009, was inspired by statistics about family violence in Italy, where she spends half of her time.

In a performance piece in the same show, “Love and Violence,” Moral clad herself in a black hijab, then used a life-size doll to act out ritually circumcising a young girl, marrying her off to a much older man and then symbolically whipping her to death.

“I was searching for answers to the question of how love can turn to violence, how a mother who calls a girl her daughter can do these things to her,” Moral told Women’s eNews. “It is a violent performance but the violence in this performance never reaches the cruelty of violence in real life.”

Though female genital mutilation is not widespread in Turkey, marriage at or under the legal minimum age of 17 is frequent. More than 3.8 million women in Turkey entered into their first marriage before the age of 18, twice as many as did so after the age of 25, according to an October 2012 report by the UNFPA to mark the first-ever International Day of the Girl Child.

Underage marriage and the unequal power dynamics within relationships were the impetus for Sibel Horada‘s menacing-looking piece “Topuz,” a ball and chain made of hair, fiberglass, metal and fabric. “Topuz is the Turkish word for a hair bun, but it also means mace, the medieval weapon,” Horada told Women’s eNews, explaining that the pun allowed her to create a strong image.

“As child marriage forces girls into an extremely vulnerable situation, ‘Topuz’ seemed like a useful tool to include in one’s hope chest,” she said.

Jennifer Hattam is an Istanbul-based freelance journalist writing about social issues, the environment and other topics for publications including The Atlantic, The Christian Science Monitor, Discover, GOOD, Sierra, and Wired.