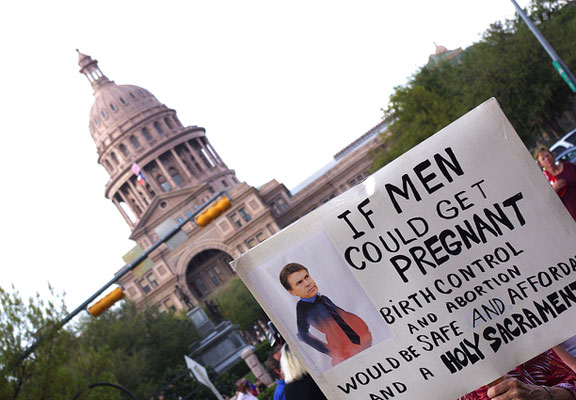 Texas will continue to take federal matching funds, keeping in place the Medicaid Women’s Health Program that, unlike the state program, does not bar Planned Parenthood from participating, RH Reality Check reported Oct. 31. The new, state-funded Texas Women’s Health Program will not launch Nov. 1 as planned and Planned Parenthood will continue to provide services to women in the state, for now.

Planned Parenthood provides cancer screenings and other services — but not abortions — to about half of the around 130,000 low-income Texas women enrolled in the Women’s Health Program, which is designed for those who might not otherwise qualify for Medicaid, CBS reported Nov. 1.

France’s parliament has approved a measure that will fully reimburse women who seek abortions, Catholic Online reported Oct. 29. In addition, the lower house has also approved a measure to provide free contraception to teens between 15 and 18 years old.

A United Nations high level task force on women, girls, gender equality and HIV for Eastern and Southern Africa has called for accelerated efforts in protecting the rights and well-being of women and girls in South Africa, AllAfrica.com reported Oct. 29.

In the aftermath of hurricane Sandy, studies indicate women are disproportionately affected by the storm for a variety of reasons, No. 1 being socially constructed gender roles, Ms. Magazine reported Oct. 31. In general the study says women still have less access to control over land, social influence and economic resources than men. This renders them less able to control decisions pertaining to disaster preparedness, such as migration and rehabilitation. Looking beyond gender roles, numerous studies have also shown that domestic and sexual abuse increase following natural disasters.

At least nine Iranian female political prisoners have gone on a hunger strike to protest body searches and abuse by prison guards at the main prison in Tehran, according to an Iranian opposition website, The Washington Post reported Nov. 1.

John Koster, a Republican congressional candidate in Washington state, said Oct. 28 that “the rape thing” is not a good enough reason for a woman to have an abortion, The Huffington Post reported Oct. 31.

A quarter of Australian women have been sexually harassed in their workplace in the past five years, The Guardian reported Oct. 30. The report, by the Australian Human Rights Commission, showed that sexual harassment in workplaces was widespread and progress on addressing it had stalled.

Sex traffickers have been using Facebook to kidnap Indonesian girls, who are being tortured, raped and then sold, The Huffington Post reported Oct. 29. So far this year, 27 of the 129 children reported missing to Indonesia’s National Commission for Child Protection are believed to have been abducted after meeting their captors on Facebook.

Men in Egyptian society routinely harass women while the attacks are often violent and rarely punished, says Egyptian-American journalist Mona Eltahawy in a video posted Oct. 29 on The Guardian. She describes her own battle to win justice after an assault in Cairo and calls for reform to Egyptian laws and attitudes to sexual harassment.

Former Arkansas Gov. Mike Huckabee said on his Facebook page that women are worse at multitasking than men because of their menstrual cycles, the U.S. News and World Report reported Oct. 29. Huckabee based his comment on a study from Stockholm University in Sweden, which was not reported by any major news sites in the U.S., though it is due to be published in a peer-reviewed journal Psychological Science.

Female members of IGY, the Israel Gay Youth organization, say women are no longer represented in senior roles, following the recent dismissal of the woman who was IGY’s national activity director, The Haaretz reported Oct. 28. Her replacement is expected to be a man.

Black women are significantly more likely to die from breast cancer compared to white women after being diagnosed, CBS reported Oct. 31. “This difference was greatest in the first three years after diagnosis,” said study author Erica Warner, a postdoctoral fellow at Harvard School of Public Health in Boston, Mass.

NARAL Pro-Choice America, the nation’s largest reproductive-rights advocacy group, has developed a sophisticated model of the “Obama defector” female voter, who in the final days of the race will be micro-targeted in key counties in Colorado, Virginia and six other swing states, said Nancy Keenan, president of the organization, The SFGate reported Oct. 30.

First lady Michelle Obama touted the Obama administration’s work on women’s issues to a crowd in Iowa City on Oct. 29, The Des Moines Register reported Oct. 30. “When it comes to standing up for our rights and opportunities, you know that Barack will always have your back. Always,” she told the crowd.

The conservative group Independent Women’s Voices released two new ads to their “Boyfriend” ad campaign to woo single women in swing states to vote for the GOP candidate, The Daily Caller reported Oct. 29. The ads compare the election to the end of a bad relationship, using numerous allusions to Obama’s presidency.

The Obama campaign’s insistence that the GOP is waging a “war on women” is offensive to professional educated women said George Will, Washington Post columnist, The Daily Caller reported Oct. 29. Will explained that the strategy has backfired on the Obama campaign because it suggests women care only about contraception and not salient economic issues.

Would you like to Send Along a Link of This Story?
https://womensenewsp.wpengine.com/story/cheers-and-jeers/121102/texas-blinks-in-standoff-sandys-unequal-effect

see what happens when we dont vote