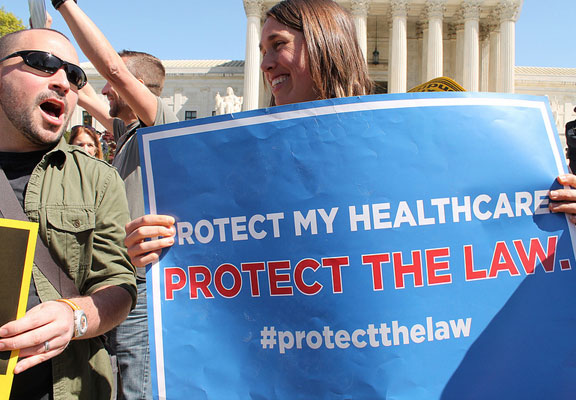 The Supreme Court upheld the gist of the Affordable Care Act on June 28, reported the Los Angeles Times, including the individual mandate requiring everyone to have insurance or face a penalty. According to the National Women’s Law Center, the Affordable Care Act enacted a number of provisions to ramp up women’s health care, including a ban on charging women more than men for insurance and requiring insurers to cover those with pre-existing conditions, which can include previous cesarean sections and having received treatment for sexual or domestic assault. Read more: Health Ruling Hailed Except on Medicaid Rules

Egypt’s democratically elected president, Mohamed Morsi, will appoint a woman as one of his vice presidents, his policy adviser told CNN June 27. At one time, Morsi, a former member of the Muslim Brotherhood, said women should be banned from the presidency. But before the election he claimed he would support women’s rights.

A birth control gel for men sharply lowered sperm counts with few side effects, according to researchers, reported the Los Angeles Times June 26. While more testing is necessary, it has the potential to become the first effective chemical birth control agent for males.

Facebook’s Chief Operating Officer Sheryl Sandberg has become the first woman on the social-networking company’s board of directors, reported the AP June 26. Sandberg is an advocate for women in leadership positions and gave a rousing commencement speech at Barnard College, a women’s college in New York City, in 2011, calling gender inequality “this generation’s central moral problem.”

The NBA remains the leader among professional sports leagues in diversity hiring practices, according to a report from the University of Central Florida’s Institute of Diversity and Ethics in Sport, reported CBS News June 26. The institute gave the NBA an A-minus for gender hiring and A-plus for racial hiring in its annual Racial and Gender Report Card.

A Cambodian appeals court ordered a reduced sentence of time served — about a month — for 13 women who had been sentenced to over two years in prison for protesting their eviction from their homes without fair compensation, reported the AP June 26.

The Women Techmakers event on June 26 in San Francisco featured five women from Google’s ranks talking about recruitment, leadership, gender bias, and why Google is such an enviable place for women to work, reported CNET June 27. “We need to tell the story of technology; the story of what we do, to girls . . .  not women, because it’s too late then,” says Gayathri Rajan, the director of product management.

Mississippi could become the only U.S. state without an abortion clinic if its only facility is unable to comply with a law taking effect soon that requires doctors who perform the procedure to have admitting privileges at a local hospital, reported Reuters June 27. The clinic is filing a federal lawsuit to stop the law from taking effect, reported the Huffington Post June 27. During a speech in May to a local Republican Party group, state Rep. Bubba Carpenter, said women could return to “coat hanger” abortions but that Mississippi had to start somewhere..

While the Supreme Court upheld the majority of the Affordable Care Act, it placed limits on the planned expansion of Medicaid, which increased the number of low-income individuals who qualify for the federal insurance program. The ruling said that the expansion itself is constitutional. However, the federal government cannot pull all Medicaid funding from a state that chooses not to receive the extra funds to pay for an expansion. Read more: Health Ruling Hailed Except on Medicaid Rules

U.S. Sen. Rand Paul, R-Ky., is holding up a Senate bill to extend for another five years the soon-to-expire National Flood Insurance Program, requesting a vote on an amendment that would define “when life begins,” reported Politico June 26.

A controversy involving Shanghai’s metro system started online on June 20, MSNBC reported June 27, when the subway’s official Weibo account–the Chinese version of Twitter –featured a picture of a female passenger wearing a revealing dress. The accompanying comment read, “If that’s what you wear on the subway, then no wonder you will be sexually harassed! There are perverts riding the subway every day and we can’t catch them all. Girls, you’ve got to respect yourself!”

New Jersey Gov. Chris Christie is expected to veto aspects of a budget bill that would reinstate over $7 million dollars to fund women’s health clinics that serve mostly low-income women, reported the AP June 26. The governor cut program funding two years ago and he vetoed an attempt to refund the program last year.

An Afghan man charged of abducting and raping a teenager worked for the Afghan local police and four of five of those in the police force have been detained in connection with the case, raising concerns about the protection of women in Kunduz, the tumultuous area in Afghanistan where the crime took place, reported the New York Times June 27.

A French tennis player told reporters at Wimbledon that he doesn’t think women at the four major international tennis tournaments, or “Grand Slams,” should receive the same amount of prize money as men do, reported the AP June 27.

The only Saudi Arabian woman likely to qualify for the summer Olympics, equestrian show jumper Dalma Rushdi Malhas, did not make the cut after her horse was injured, reported the New York Times June 26. The country’s recent decision to lift its ban on women now lacks any immediate consequence.

A female British journalist was sexually assaulted in Cairo’s Tahrir Square while in Egypt to film a documentary about women’s rights abuses in the country. Natasha Smith reported on her blog on June 26 the details and aftermath of what she described as a “horrific sexual and physical attack.”

Feng Jianmei, a woman who was forced to have an abortion by local Chinese officials in her province, and her family are being attacked as “traitors” for talking to foreigners about her late-term abortion, according to a relative and a lawyer, the Guardian reported June 26.

Sex-segregated classrooms were not based on accurate scientific evidence, the Feminist Majority Foundation finds in a June 26 study of single-sex education in K-12 public schools from 2007-2010. Among other findings the report also finds the classrooms used gender stereotypes in teaching and were not rigorously evaluated to determine whether teaching boys and girls separately improved educational outcomes.

A Gallup report says the majority of women in Arab nations said they should have equal legal rights and equal access to education and employment while the majority of men, though smaller, agree. CNN reported that the biggest divide was in Tunisia, where 87 percent of women and 59 percent of men say women and men should have the same legal rights, “which is surprising because it is often hailed as the most progressive Arab state on gender issues,” Gallup said.

The University of Virginia reinstated ousted president Teresa Sullivan after weeks of protest and controversy following the decision to remove her as head of the university, reported CBS News June 27. Women are about 23 percent of all university presidents, according to a survey published March 2011 by the American Council of Education.

Nora Ephron, the essayist and humorist who became one of her era’s most successful filmmakers, making romantic comedy hits such as “Sleepless in Seattle” and “When Harry Met Sally,” died June 26 in Manhattan. The New York Times obituary identified the cause as pneumonia brought on by acute myeloid leukemia.

Would you like to Send Along a Link of This Story?
https://womensenewsp.wpengine.com/story/cheers-and-jeers/120629/health-care-ok-only-mississippi-clinic-may-close 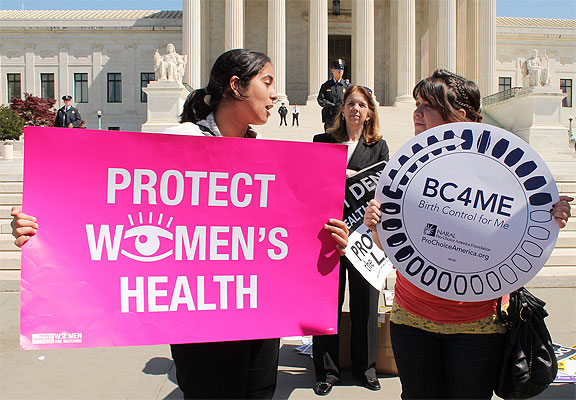 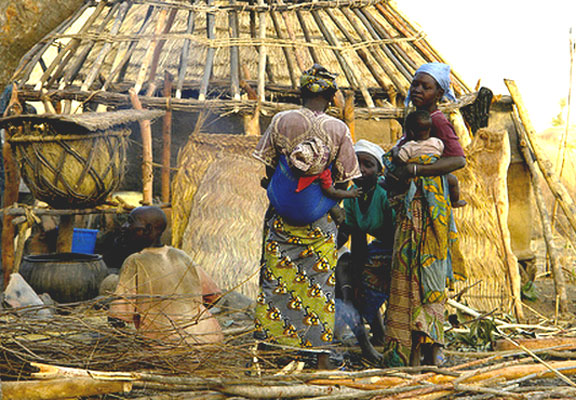