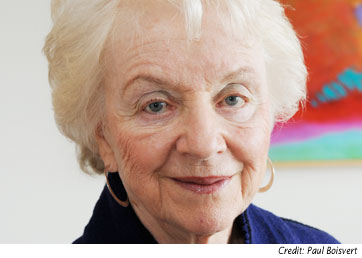 The first female governor of Vermont reflects on how she wound up running for office with children aged 3, 6, 8 and 10. In this excerpt from her book “The New Feminist Agenda” she credits, among other things, coming of age in a transitional time.

(WOMENSENEWS)–The 1950s portrait of the ideal family has almost become a museum piece: Mom standing by the kitchen counter wearing an apron; Dad sitting in an easy chair, wearing a shirt and tie; their two children–the boy always somewhat older and taller than the girl–playing quietly on the rug in front of the fireplace. Why, I wonder, is Dad always reading the newspaper and Mom incessantly stirring batter in a bowl?

Surprisingly, working families today– despite their guilt about not spending enough time with their children–actually spend more time with them than their parents did. Two economists from the University of California, San Diego, reported that child care time by parents was about 12 hours a week before 1995. “By 2007, that number had risen to 21.2 hours a week for college-educated women and 15.9 hours for those with less education.”

All parents, regardless of income, want the best for their children. Most parents question, from time to time, whether they are good parents and both Mom and Dad are likely to be stressed, depressed or both. Many families swing back and forth between the two models, depending on the time in their lives, whether they have an opportunity to work full- or part-time, their financial resources, their personal preferences and cultural expectations.

When I am asked how I managed to have a political career and raise four children with my then-husband, I don’t have a clear answer. The most accurate reply is that I muddled my way through, but since I tell women not to berate themselves, I will answer that I did it in stages.

When I got married at the age of 25, considered “old” in 1959, I believed I could easily have a career in journalism and have a family. Marriage would be no substitute for my ambition.

I knew from the start what I did not want, and that was to be like a typical 1960s doctor’s wife I had met at teas for the Woman’s Auxiliary to the American Medical Association, who had sacrificed her career to “put her husband through medical school” and then, for her reward, settled into full-time motherhood. A woman’s identity was closely tied to her husband’s in those days. Protocol demanded that every envelope be properly addressed to Dr. and Mrs. Arthur Kunin. I, like most of the women of my generation, had no first name.

But when my daughter Julia was born in 1961 I dropped all ambivalence about family and work and reveled in the miracle of motherhood. I saw myself as the original earth mother when she nursed at my breast; I was now part of the Great Chain of Being. I was happy and determined to take total responsibility for her care.

When did my attention wander off from motherhood and back to thoughts of a career? On my 30th birthday, my friend Terry and I were sitting at an outdoor café in Cambridge, Mass., rocking our navy blue English baby carriages back and forth in rhythm. We lived in Cambridge, where my husband was pursuing post-doctoral research at Harvard and I had recently given birth to our second child, Peter. I said to Terry, “My God, I’m 30. What’s going to become of my life?” (This was the hippy era, when the mantra was “Don’t trust anyone over 30.”)

I came of age as a mother and a politician in a transitional time, when the women’s movement was beginning to illuminate a new world in front of our eyes. Some women my age looked the other way. I was transfixed. The women’s movement gave me permission to change my timetable for reentry into the adult world. The usual schedule for mothers was that they would wait until their children were fully grown and safely ensconced in college.

The environmental movement and the women’s movement had both drawn me in with a passion and given me a cause. Instead of waiting, I ran for a seat in the Vermont legislature when my children were 3, 6, 8 and 10 years old and served for three terms, before being elected lieutenant governor and then governor.

But in the early 1990s, when I was writing my first book, “Living a Political Life,“a memoir, the first draft had so many passages about guilt that my editor took large chunks out. Most distressing to me is that my children have almost no memory of the chocolate chip cookies I baked, the macaroni and cheese I cooked or the hours on the playground I spent shoveling sand–for 11 years between 1961 and 1972.

The answer to the question of “How did you do it?” is that there is no simple single answer. Each person walks through the labyrinth at a different pace, and even in a different direction, before she or he comes out the other side. I know that if my husband had not been the primary wage earner and supported my ambitions I would not have had the flexibility or finances to launch and sustain a 16-year political career.

I had one other advantage not often discussed: a high-quality nursery school (what would now be called a preschool), called Jill’s School, that my youngest son Daniel loved to attend. Then there was Mabel Fisher who babysat and later Shirley Labelle whose specialties were apple pie and baked potatoes. Her real talent was that she greeted my children when they came home from school. Without the help of these women, I would have been still standing by the stove stirring batter.

The following excerpt is from “The New Feminist Agenda: Defining the Next Revolution of Women, Work and Family” by Madeleine M. Kunin (Chelsea Green, 2012). It is reprinted here with permission by the publisher. For more information about the book, visit www.chelseagreen.com

Madeleine M. Kunin was the first female governor of Vermont and the first woman in the U.S. to serve three terms as governor. She served as deputy secretary of education and ambassador to Switzerland in the Clinton administration. She lives in Burlington, Vt. 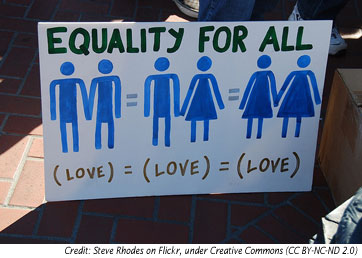 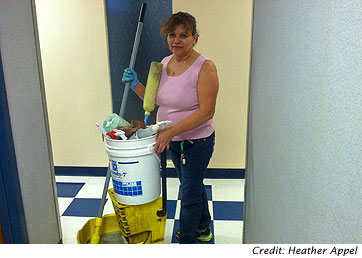