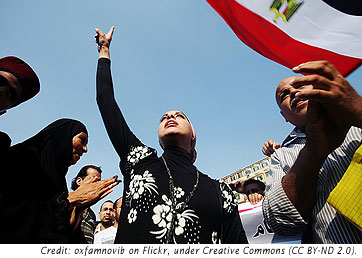 Egypt’s revolution is now often described as hijacked and women’s legal rights are seen as vulnerable to an Islamic-style promotion of marriage and family. But in a show of their own force, women keep braving the deadly dangers of street protests.

Primary school teacher Reham El Hakim, for instance, was on the front lines on May 5 when the 12th person was killed during demonstrations against the military government in Abbasaiya in front of the Ministry of Defense. Hundreds were detained and although many have been released, Associated Press reports paint a grim picture of the harassment, molestation and threats of increased sexual violence these men and women faced in custody.

El Hakim wasn’t among the detained, but still felt fear in her heart when she saw tear gas and water cannons and heard gunfire rip into the crowds. She said it was her duty, though, as an Egyptian and a woman to be part of the movement against the military.

“When I saw the gas and smoke, of course I was afraid. I heard the sound of gunfire. I wanted to see what was happening,” she said.

This kind of bravery, said Mariam Kirollos, an activist who was among the millions protesting in Tahrir Square last year, shows the revolution, for all the disappointment of recent months, is still being fought and holds promise for stronger women’s rights.

“I believe that everyday, the protests show the power of women,” said the 22-year-old political science graduate, who also participated in the Abbasaiya protests.

Kirollos pointed to women’s refusal to back down in the face of the military junta in March 2011, when numerous protesters were rounded up and subjected to “virginity tests” by officers, which prompted a much-talked about court case. She also cited the attack on a female protester last December by security forces who stripped her clothes and beat her, with camera crews catching the brutal scene on film.

“Even after what happened last December; it makes women stand up for their rights. Even the female doctors at the field hospitals at demonstrations. It takes a lot of guts to be working in that [environment],” Kirollos said.

It’s now commonplace, however, to hear people say that the military government and Islamic politicians, who did not at first approve of the anti-Mubarak demonstrations, have “hijacked” the revolution.

While activists promise to protect the nation’s more progressive divorce laws and higher marriage age for women, there is no action plan in place should parliament, with its large, family-focused Islamist parties, decide to tackle any laws they determine hurt marriage or the sanctity of the family unit.

Party members have also said they support the controversial act of female genital mutilation, despite Egypt banning the practice in 2008 and implementing fines or jail sentences. A 2005 government health survey found 96 percent of Egyptian women who had been married had undergone the procedure.

Kirollos said that everyday Egyptians–inundated with news about the upcoming May elections and sophisticated media campaigns from the Muslim Brotherhood contesting the banning of candidates–are losing sight of the true goals of the revolution. Too little is being said now about promoting human rights, ending corruption and moving Egypt toward democracy.

“During the protests in Tahrir [last year] the enemy was clear to everyone. People cannot understand that the Supreme Council of Armed Forces is the same regime we’ve been chanting against since Jan. 25. Right now they define ‘revolutionaries’ with their movements or groups  . . .  and not with their causes,” she said.

But that doesn’t mean women’s voices are being drowned out. In fact, Kirollos said the revolution has put fresh fire under issues surrounding women in politics, media, education and grassroots movements, even though they were not necessarily the main thrust of Egypt’s revolt.

The latest debate swept over the Internet two weeks ago, after Egyptian-American activist Mona Eltahawy accused Middle Easterners of “hating” women in her controversial Foreign Policy May/June cover story “Why do they hate us?” The piece described the second-class-citizen status that some women in the region face, which is enshrined in both culture and legislation.

The story was accompanied by an image of a naked woman painted in black, with only her eyes unpainted, a sexualized symbol of the traditional burka and niqab dress worn by some Muslim women.

Soon after, reactions on blogs and news outlets began pouring in, with many refuting the idea that hate was the primary cause of the suppression of girls and women.

“Even before reading the responses, I could have guessed what most would say, for indeed Eltahawy’s piece is reductive and essentialist, at the same time that it generalizes and perpetuates some of the very stereotypes individuals like her have long struggled to debunk,” wrote Parastou Hassouri, a consultant with International Civil Society Action Network’s MENA program, on the popular Arabist news website.

But this kind of dialogue will likely be found increasingly on the fringe of Egypt’s main political stage, with politicos gearing up for a potential three-way battle between Egypt’s military, the Islamist-majority parliament and Egypt’s new president for control of the country.

The fracturing of the country’s protesters was on display on a recent Friday, when thousands of Egyptians once again fill Tahrir Square in the heart of downtown Cairo, calling for an end to military rule.

Many wore black shirts with a white clenched fist across the back in support of the April 6 Youth Movement, one of the first groups to call for mass demonstrations leading up to Egypt’s 18-day uprising.

But they did not have the protest space to themselves.

Just meters away, taking up the other half of the roundabout, thousands more were demanding the reinstatement of failed presidential candidate and lawyer Hazem Abou Ismail, whose supporters largely believe in traditional gender roles for women and the separation of sexes, as well as banning bikinis on public beaches and the consumption of alcohol.

Islamic protests like these, along with the presidential campaigns, consume much of Egypt’s media spotlight nowadays.

Less is said about protecting personal rights and freedoms. Last year’s constitutional amendment vote limited some presidential powers. But since then, the constitution-drafting process has stalled. The proposed committee tasked with revising the landmark legislation was disbanded and there is no word when it will be reformed.

In the meantime, Islamist politicians and like-minded groups have taken advantage of Egypt’s political vacuum by winning seats in parliament and fielding their own presidential candidates. This comes despite the fact that some of their members were openly dismissive of the uprising in its early days.

It helps that some of these groups, unlike their more liberal counterparts, are highly organized and have a long history. Others like the ultra-conservative Salafist party Al-Nour are using religion and the promise of an Islamic Egypt to bolster support.

The funding of these groups is a big question here, with much speculation surrounding the oil-and-gas rich states of the Persian Gulf, which are Islamic, conservative and poised, perhaps, to spread their cultural influence.

“I don’t have any reliable information although I hear a lot about their funds from the Gulf,” said Samer Soliman, a political science professor at the American University in Cairo.

But Soliman does not embrace the hijacking metaphor to describe the current situation in Egypt. Instead, he believes that there is more to come

“The revolution is not finished,” he said in a recent phone interview. “Or at least its outcomes are not yet finalized. So it is wrong to say that it has been ‘hijacked’ by the Islamists. But at this moment, they are the first beneficiary. But in the future I think there is a room for marking a balance in Egyptian politics.”

Would you like to Send Along a Link of This Story?
https://womensenewsp.wpengine.com/story/equalitywomen%E2%80%99s-rights/120510/egypts-women-keep-showing-power-in-protest 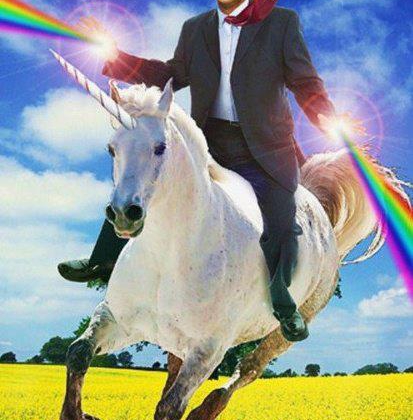