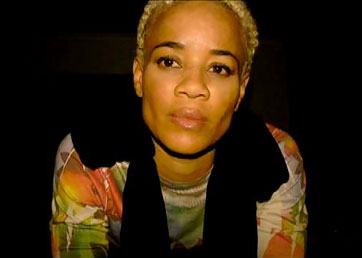 Brook Bello had all the trappings of a successful career. But the actress-poet-filmmaker also had a horrible childhood secret. Now she’s teaming up with the International Black Women’s Public Policy Institute to talk about sex traffic.

She was featured in the 1995 futuristic movie “Strange Days,” starring Angela Bassett and Ralph Fiennes. She has also authored a book of poems, “To Soar without Leaving the Ground.”

Despite her achievements, Bello was desperately unhappy for many of these apparently successful years. She had a horrific youth hidden deep inside her. Often, to block it out, she numbed herself with drugs and alcohol. She fought the impulse to take her own life.

Bello had been one of the millions of women and girls in the U.S. and internationally who are abducted, duped or coerced into selling sex for their “owners'” profit.

For years she said nothing, but now she’s going as public as she can.

Bello has written, produced and directed a documentary film, “Survivor: Living Above the Noise,” in which she tells her own story as a sex trafficking victim, as do others in the film. The documentary takes the viewer to Bahrain in the Middle East, one of the global hotspots of the practice, where Bello went to recover from her experiences and learn about the impact of sex trafficking on women and girls there.

She is also partnering with the International Black Women’s Public Policy Institute to expose the problem of sex trafficking in the African American community. Bello and the policy institute, founded in 2009 in Washington, D.C., are planning nationwide discussions and screenings of her film, which will be shown in May at the 65th Cannes Film Festival.

Ka Flewellen, co-founder and executive director of the International Black Women’s Public Policy Institute, says African Americans must keep a special eye on trafficking victims who are women and children from the African diaspora.

“We will mobilize women of African descent within the U.S. to participate in a special hearing this fall on Capitol Hill, in an effort to develop a public policy response,” Flewellen said. “Sexual slavery and trafficking aren’t just international occurrences.  They happen in our communities here in the U.S. We must eradicate these practices.”

As a vehicle for sharing her experiences and raising awareness of sexual trafficking, Bello said her documentary has helped her healing process.

“Through the film, I speak for those who didn’t make their way out,” Bello told a gathering in March of African American female leaders convened in Washington, D.C., by the International Black Women’s Public Policy Institute. “I speak for the prostitutes on the street.”

Bello said that like most sex trafficking victims, she was abused and sexually assaulted as a child. “There was violence in my family.  My mother was a highly educated woman, but she lived with a lot of pain. I had four stepfathers.  She was beaten regularly, so much so that there were times I couldn’t recognize her face. Then, when I was 11, I was raped.”

She said she started drinking to ease her pain, and when she felt she could no longer stand the violence at home, she and a friend ran away to Los Angeles, where she started working for a madam as a prostitute.

“They kept me high on Quaaludes and heroin,” she said, so she would keep working in order to buy drugs and earn money for the madam.

Eventually, Bello and her friend escaped. They hitchhiked to Las Vegas, then to New York, where Bello was arrested at 16 for prostitution. Upon release, Bello moved back to Los Angeles and began her acting career.

“I was always good at accents and characters,” Bello told the Washington gathering.

Losing herself in film roles helped her pretend her earlier life of sexual abuse and victimization hadn’t happened. But denial and delusion didn’t help. “I was gripped by fear.  I tried to commit suicide.  I didn’t know how to talk to people.”

Producing the film and founding the nonprofit Above the Noise, which assists sex traffic victims, helped Bello overcome the years of abuse and victimization.

The numbers of women and girls involved in sex slavery are hard categorize, since they are often included with statistics for other forms of involuntary labor and smuggling undocumented immigrants across borders.  But in 2009 UNICEF estimated that 1.75 million women and children have been trafficked for sexual purposes internationally.

U.S. State Department data indicate that between 14,200 and 17,500 women and children are trafficked in the U.S. annually. Most are between 12 and 14 years old.  Increasingly, boys between 11 and 13 are also trafficked.

Sexual trafficking of women and girls is highly profitable. A 2008 report by the United Nations Office on Drugs and Crime estimated that trafficking in Europe alone generates $3 billion per year.

Children are usually abducted from their families or sold to traffickers by parents or guardians to pay off a debt.

“A well-dressed man might approach a family in Nigeria, for example, and say that their daughter is eligible for a full scholarship to study in Paris,” Ellyn Jo Waller, wife of the pastor of Philadelphia’s Enon Tabernacle Baptist Church, told those at the gathering.

From there Waller described a typical scenario. The man will pay the daughter’s airfare and arrange for her identification papers and passport.  At the airport, he will take the daughter’s papers from her for “safekeeping.” After landing in France the daughter is abducted and told that she has to sell sex.

At that point she is cut off and without any options, said Waller. “The daughter is trapped in a country where she knows no one, doesn’t speak or understand the language and is afraid to report her situation to authorities.”

Would you like to Send Along a Link of This Story?
https://womensenewsp.wpengine.com/story/prostitution-and-trafficking/120429/african-americans-turn-headlights-sex-traffic

Margaret Summers is a Washington-based writer.