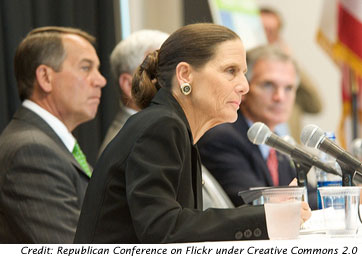 GOP women are poised for gains in Congress in 2012, either by leaps or baby steps. ShePAC is optimistic, despite Jean Schmidt’s March 6 upset in Ohio. Judy Biggert’s race to keep her seat in Illinois is a lynchpin race.

(Women’s eNews)– The first primary of the season, on March 6 in Ohio, was a disappointment for GOP-women-spotting. Incumbent Rep. Jean Schmidt lost.

Suzanne Terrell, co-chair of ShePAC, a new super PAC supporting Republican women, isn’t fazed. “I think there is a good chance that we’ll elect four new women [to the Senate]. I think that we will be electing new women to the House.”

If ShePAC meets its $25 million fundraising target, it could play a major role in influencing many of these elections.

Super PACs can raise unlimited sums to run political ads so long as they do not “coordinate” with candidates.

But ShePAC faces the formidable and unpredictable effects of other Super PACs.

The Campaign for Primary Accountability, for instance, which runs ads against incumbents, has been credited with knocking Schmidt out of her seat.

With only 29 Republican women in the U.S. House of Representatives, every win, loss and resignation can change the stakes. Women are only 17 percent of Congress and GOP women are a minority–just 30 percent–of that minority in the U.S. House.

This year, close to 100 Republican women will run in congressional primaries for House and Senate seats. That’s a good show of force, historically speaking, albeit a backtrack from the stormy 2010 midterm elections, when a record 145 Republican women sought their party’s nomination, according to the Center for American Women and Politics at Rutgers University in New Brunswick, N.J. In 2008, 71 Republican women ran.

When the votes were counted in the last election cycle, all the campaign bluster boiled pretty low; just 35 percent won their party’s nomination.

That left Republican women stuck in the role of little sister to the Democrats. Of the 153 Democratic women who filed to run for office, 99, or about 65 percent, won their primaries.

Republican women, however, are making steady, if slow, gains. Right now, 24 of 73 women in the House of Representatives are Republican. Just 10 years ago, there were only 18. A decade before that, there were 9.

GOP women could theoretically gain as many as five or six seats in the House this year. If that happened, they might get more leadership positions in the lower chamber.

Right now, of the 25 House committees, only one–Foreign Affairs–is chaired by a woman, Ileana Ros-Lehtinen. Because Republicans control the House, only Republicans chair committees.

All that, however, depends on a number of variables.

One of them is redistricting tied to the 2010 Census. That redrawing of voter precincts gives newcomers–often women–a chance to break into office. It’s also a presidential election year, when more voters turn out and give new candidates more hope.

These two factors in combination–redistricting in a presidential election year–only coincide every 20 years. Last time, in 1992, women made huge gains in higher office and that’s why some are looking for another “year of the woman” in 2012.

Yet redistricting, which makes incumbents vulnerable, can hurt women already in office, such as Judy Biggert, an incumbent from Illinois’ 13th District, which was eliminated in 2010 redistricting. She is now running in the 11th District, which holds most of her old district but tilts more Democrat. NARAL Pro-Choice America gave Biggert the best rating of any Republican woman in Congress in 2011.

Biggert would need to win to make it a big year for Republican women, as well as two other major frontrunners–Missouri’s Ann Wagner and Indiana’s Jackie Walorski.

Six more women with fighting chances would also need to pull off victories, to make up for the defeat of Schmidt and other vulnerable or retiring incumbents.

Without such victories, GOP women’s numbers could stay the same in the House, since Jean Schmidt lost her seat and Sue Myrick, from North Carolina’s 9th District, retired.

One close race is playing out in Indiana’s 5th District. Susan Brooks had raised the most money as of the end of 2011, when the last financial records are available, but another hopeful, David McIntosh, was closely trailing her. Since the new year, more men have entered the race. Brooks was deputy mayor of Indianapolis and a U.S. Attorney for Southern Indiana.

Kentucky’s 4th District race also has a woman running in a field of men. Alecia Webb-Eddington is a former state trooper who serves in the state legislature. She is the only Republican candidate in the race who has served in a legislative body, though two others have been elected to county judge-executive positions.

Mia Love, the mayor of a small Utah town now running in the state’s 4th District, is far behind financially. As of the end of 2011, she’d raised about $40,000 compared to Republican Carl Wimmer, who had $200,000. That’s not to mention the incumbent Democrat, Jim Matheson, who has close to one million.

Would you like to Send Along a Link of This Story?
https://womensenewsp.wpengine.com/story/campaign-trail/120312/gop-womens-superpac-looks-2012-gains 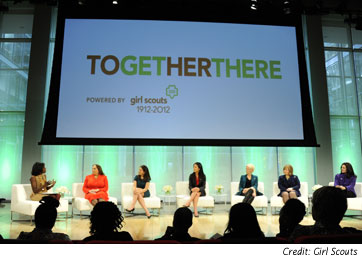 Girl Scouts Are Full of Stars, Mine is Miss Hazel 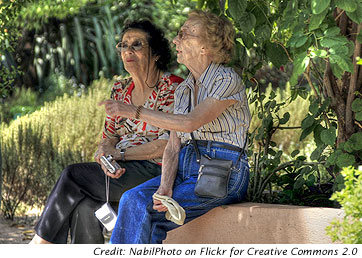