The revision of legal codes in Germany in the 1860s raised questions about sexual misconduct, says Hanne Blank in her book “Straight.” In this excerpt, she examines how that led to the creation of the concept of heterosexuality and homosexuality.

(WOMENSENEWS)–Had the German-speaking world not been going through some legislative growing pains in the 1860s, we might still live in a world without heterosexuals.

Germany came together in 1866 along geographic lines that are more or less familiar to us today, an amalgamation of the multiple German-speaking kingdoms, duchies and principalities of the North German Confederation joined together under a generally Prussian leadership. Like many civil governments, Germany was still wrestling with the implications of the French Revolution, as well as feeling the aftershocks of its own revolutionary conflicts in 1848.

The new ideals of secular and civil government compelled German lawmakers, as they revised their legal codes to suit a new, composite nation, to figure out what to do with inherited collections of sex-related laws that were often more or less identical to old Church decrees.

It was a fraught process. Paragraph 143 of the Prussian Penal Code of April 14, 1851, in particular, provoked significant protest. P. 143 stipulated harsh punishments, consisting of up to five years of hard labor and accompanied by the loss of civil rights during the period of punishment, for anyone convicted of "unnatural fornication between people and animals, as well as between persons of the male sex." The rationale given for this law, and the severity of its consequences, was that "such behavior is a demonstration of especial degeneration and degradation of the person, and is so dangerous to morality."

The law, clearly written to sound dispassionate, nonetheless sounds the old familiar religious gong of morality and sin. As befitting a post-Enlightenment, science-respecting culture, the law invoked nature as both a stand-in for God and a dispassionate secular authority. The addition of degeneracy made it au courant with fears of a decaying race.

Taken all together, P. 143 provided highly effective leverage against sexual misconduct for the government. It also, inevitably, provided the same for blackmailers. Officially or unofficially, it was a law to ruin lives with.

Among the individuals who stepped forward to oppose the law were Karl Ulrichs and Karl-Maria Kertbeny. They were not friends, though they corresponded for a while, and only Ulrichs is known to have been attracted to men. But both shared the conviction that P. 143 was unjust and it is due to their work that we have the word and the concept of the "heterosexual."

Ulrichs’ devoted opposition to P. 143 stemmed from his having been sacked from a promising bureaucratic career when his attractions to men were discovered. The injustice led him to devote his life to arguing, as logically and as rigorously as he could, that same-sex sexuality was natural, inborn and unchangeable, and therefore ought not to be punished.

Ulrichs was no scientist, but he scoured the medical literature for insights into his own sexual condition. Impressed by medical literature about hermaphrodites, he developed a theory that he too was a type of hermaphrodite. Where hermaphrodites’ bodies encompassed both male-typical and female-typical organs in the same body, Ulrichs claimed that the Urning, or man who loved men, had a male body but a female mind. (The notion that gender–the social aspects of sexuality–might be separable from biological sex did not become widespread until the second half of the twentieth century.)

Ulrichs’ theory of "sexual inversion," rigorously logical by the standards of the day, was presented in 1864 in a pair of pseudonymously self-published pamphlets. Ulrichs hoped that his pamphlets would persuade German legislators to change their minds and thus the law.

Austro-Hungarian Kertbeny shared Ulrichs’ conviction that the Prussian law was unjust. A friend and coworker’s suicide, committed because a blackmailer threatened to expose the young man’s "abnormal tastes," had opened Kertbeny’s eyes to the problems inherent in a law that made it illegal for two men to engage in activities that a man and a woman could partake of together without consequence. Kertbeny produced two strongly worded, anonymously published pamphlets arguing against P. 143 that employed the notion of human rights as derived from the French Declaration of the Rights of Man and Citizen.

Ulrichs’ and Kertbeny’s approaches differed in many ways. While Ulrichs leaned on the innate femininity of the Urning psyche in order to emphasize the involuntary character of same-sex desires, Kertbeny insisted that men who loved men were typically manly and virile and deserving of full citizenship in the modern state. Ulrichs’ approach, with its insistence that men who loved men were on some level not male, implicitly endorsed the idea that biological sex could be legitimate grounds for different treatment under the law. Kertbeny, by contrast, took a leaf from English philosopher Jeremy Bentham’s book and argued simply that it was wrong to punish actions that harmed no one and all the more unethical to punish them selectively according to the biological sexes of the participants.

The two men shared a moderately sized correspondence, but Kertbeny never adopted Ulrichs’ models or his terminology. He preferred his own system of classification, first explicated in a letter to Ulrichs on May 6, 1868, in which he opposed "homosexuals" to "heterosexuals" as two parallel and, he implied, equal types of human beings.

As it turned out neither man’s argument, nor their associated terminology, made any dent in the law. P. 143 and similar laws were retained through multiple incarnations of the German legal code, later becoming P. 175 in 1871 when Germany was fully united. Later, and infamously, Hitler used this law to legitimize the incarceration and murder of thousands of Schwulen, or "faggots," in the concentration camps.

The law was not removed from the books until 1969. By that time, the "heterosexual" and "homosexual" terminology of those who had so stalwartly resisted it in the beginning had won out, and so for the most part had the view of sexuality those terms implied.

Would you like to Send Along a Link of This Story?
https://womensenewsp.wpengine.com/story/books/120204/idea-heterosexuality-traced-german-law

Hanne Blank is a writer, historian and public speaker whose work has been featured everywhere from Out to Penthouse. She is the author of "Virgin: The Untouched History" and seven other books that explore the intersections of sexuality, gender, the body and culture. She has been a visiting scholar at the Institute for Teaching and Research on Women, as well as an instructor, guest lecturer and visiting speaker at colleges and universities, including Tufts, Brandeis and Johns Hopkins. 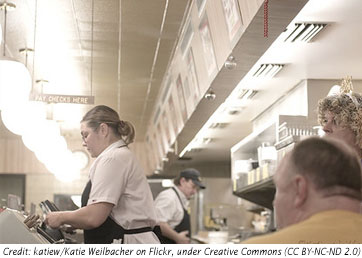