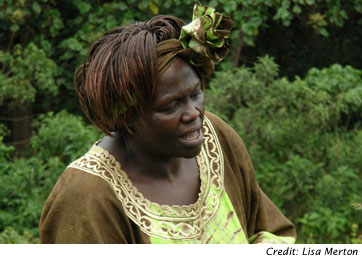 “Taking Root: The Vision of Wangari Maathai” is broadcast tonight on PBS. Here, Lisa Merton looks back on making the film in Kenya and struggling to capture the sense of divinity and hope projected by the recently deceased Nobel laureate.

(WOMENSENEWS)–My engagement with the late Kenyan environmentalist Wangari Maathai began as a 15-minute film and ended with the 54-minute tribute that airs tonight on PBS.

I hope viewers of our film will pick up on the luminous sense of divinity that hovered around Maathai. If so, we will have done our job.

Maathai did what had to be done and never lost hope, however hard things were for her. Her perseverance made it difficult for me to accept, just a bit more than three months ago, that she could really die. I thought I would have her as a friend and mentor for 20 more years, at least.

"Well I must say that when you travel along a path such as the one I have traveled, you must have hope," she said to me in an interview in 2005. "You can’t afford to give up. And so no matter how dark the cloud is, there is always a thin silver lining. I always tell myself, just look for that thin silver lining and hold onto it long enough . . . and eventually that silver lining can sometimes become a very big beam of light."

My first meeting with Maathai was in May 2002 when Alan Dater, my husband and filmmaking partner, and I were asked to go to Yale University to interview the Kenyan environmentalist. A board member of the Hartley Film Foundation had heard Maathai give a talk and asked us to produce a 15-minute film based on our interview and some archival footage.

At that time Maathai was the McCluskey visiting fellow in conservation at Yale’s School of Forestry and Environmental Studies. I remember clearly the moment she walked into the room. Her smile was wide and crinkled up the corners of her eyes with laughter. Her handshake was strong and firm. As her story unfolded, we were in awe.

‘Child of the Soil’

She had grown up in the Central Highlands of Kenya living on the land; a "child of the soil," as she put it. Everything she said was imbued with that deep rootedness in the natural world and her understanding of humanity’s interdependence with nature.

As a University of Nairobi representative to the National Council of Women of Kenya, she came to learn that rural women did not have enough firewood, their children were malnourished and the soil was eroding from their fields. It was then that she made the connection between environmental degradation and poverty and suggested to women that they plant trees to ameliorate their circumstances: trees prevent soil erosion, they supply firewood and nutritious fruit to combat malnutrition and can also provide economic benefits.

In fighting for a healthy environment for rural women, for good governance and human rights, Maathai had walked a path that brought her head to head with Daniel arap Moi, the president who had a stranglehold on power in Kenya for 24 years. In 1989, the Moi regime was behind the proposed construction of the Times Tower, a 62-story skyscraper in central Nairobi’s Uhuru Park, "the people’s park," as Maathai called it. She successfully stopped the construction of the tower. This was the first of many confrontations that pitted Maathai and Moi against one another.

She had suffered personally and publicly, yet she harbored no bitterness. In February 1992, for example, she demonstrated with the mothers of political prisoners in Uhuru Park at what came to be known as Freedom Corner. Hundreds of people demonstrated for several days. The Moi government sent in the General Service Unit, an arm of the Kenyan military, to brutally break up the demonstration. Maathai was beaten unconscious and was in a coma in a Nairobi hospital for many days.

At the point when we met her in 2002 she was the founder and director of the Green Belt Movement in Nairobi. Great things–election to parliament later that year and winning a Nobel Peace Prize in 2004–still lay ahead.

Her story was universal.

Our young daughter, with us in Kenya during the filming, was in the midst of reading the Harry Potter books and overheard our conversations about Maathai. "Wangari is just like Harry Potter and Moi is He Who Shall Not Be Named," she said one day. She was exactly right.

On the drive back to Vermont after the interview at Yale, we buzzed with inspiration. We wanted to bring Maathai’s story to the world. We talked about going to Kenya, about making a film that would put her life in the context of Kenya’s history, about filming the other women of her Green Belt Movement, about finding the right archival footage.

She had put the suffering of rural women in the spotlight and in so doing started a revolution that encompassed environmental justice, human rights and good governance.

Making "Taking Root" is the most difficult thing I’ve ever done because I wanted to do justice to Maathai’s story in the most engaging and inspiring way possible. It was a great responsibility.

Later that year, in the 2002 election in Kenya, Maathai was elected to parliament with 98 percent of the vote and became the deputy minister of environment. Since the Yale interview that May we’d been working on raising money to make the film.

Then on Oct. 8, 2004, the phone rang at 5 a.m. A friend had just heard on BBC news that she’d won the Nobel Peace Prize. Suddenly a lot of the world knew about Maathai.

Just as the Nobel committee was making its decision, Women’s eNews was interviewing Maathai as a potential 21 Leader for the 21st Century. Even with the world suddenly clamoring for her time, Maathai traveled to New York to accept the award.

Living and Breathing the Film

From then on, we lived and breathed the film to the detriment of our family life, at least at the time. But I don’t regret any of it. I feel honored and deeply grateful for every minute that I got to spend with Maathai, whether we were planting trees in the Aberdare Forest or making the film.

Her death in September was a terrible blow.

Even though I knew she was sick, I thought if anybody could conquer cancer, she could. I learned so much from her.

First of all, don’t give up. She had the courage to believe in herself and how she wanted her country to change and she wouldn’t let anyone or anything stand in her way.

She linked environmental degradation to poverty and was fearless in her advocacy for those in need; often women overlooked by the powerful. She sought to ease their circumstances and that eventually involved speaking truth to power.

The United States has always had a paternalistic relationship with the continent of Africa, in my view. "We know and you don’t. Listen to us!" We have not been very good at listening. Here was a chance to reverse that.

Maathai and the Green Belt Movement has so much to teach us about environmental justice; that a healthy environment creates healthy communities and that it is a human right to live in an environment that is not detrimental to your well-being.

I am pleased and proud that "Taking Root: The Vision of Wangari Maathai" is a part of the Women and Girls Lead Initiative with ITVS. I hope her story will inspire women and girls of all ages to believe in themselves, and do whatever they find possible.

"Be a hummingbird!," Maathai always used to say. "Do what you can!"

Would you like to Send Along a Link of This Story?
https://womensenewsp.wpengine.com/story/arts/120104/taking-root-filmmaker-remembers-wangari-maathai

Lisa Merton studied textile design and weaving in Scandinavia and, after returning to the United States, worked professionally as a weaver for 10 years. While studying in Norway, Merton was inspired by a series of tapestries that depicted the occupation of Norway by the Nazis. Her intent was to weave tapestry and use it as an art form for social change, but instead she ended up as a production weaver. It was not until she started making films in 1989 that she fulfilled her intent to weave images that could inspire social change.

ITVS’s Women and Girls Lead is an innovative public media initiative designed to focus, educate and connect women, girls and their allies across the globe to address the challenges of the 21st century. "Taking Root: The Vision of Wangari Maathai" will be rebroadcast on Jan. 5 at 10 p.m. (check local listings) on PBS’s award winning series Independent Lens in support of Women and Girls Lead. 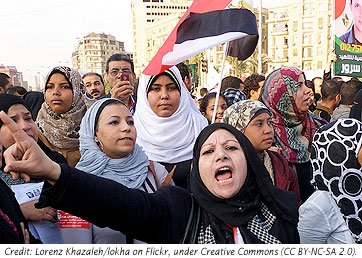 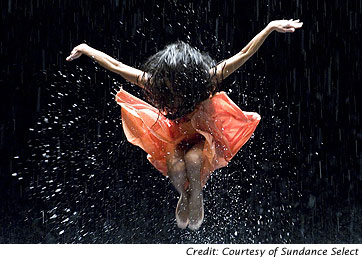