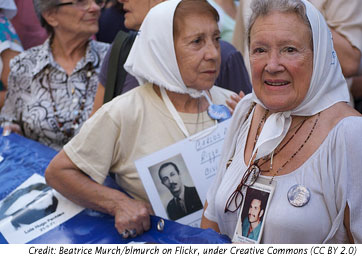 Argentina’s Grandmothers of Plaza de Mayo think a trial now underway could reunite them with stolen grandchildren. A key ally is U.S. Rep. Hinchey, who is pushing Obama to declassify relevant documents by executive order.

BUENOS AIRES, Argentina (WOMENSENEWS)–In a major trial here, the government is accusing 11 former leaders of the military junta of systematically appropriating infants belonging to some of the 30,000 citizens who were killed for being deemed "leftist subversives" during the so-called Dirty War from 1976 to 1983.

The trial, expected to close this year, is being closely watched by a group of women now in their 80s or 90s, known as the Grandmothers of Plaza de Mayo.

For 30 years they have driven a very public effort to find stolen grandchildren and to bring their children’s killers to justice.

Now they are finding an ally in a Democratic Congressman named Maurice Hinchey, who represents the 22nd district of New York, northwest of New York City and bordering Pennsylvania.

Hinchey announced last week that he’ll retire at the end of this year. For now, he is seeking the declassification and release of CIA and Pentagon records that could help identify some of the missing grandchildren.

"We know that many people at the time went to the U.S. embassy and gave testimony about what happened to them," said Estela Carlotto, president of the Grandmothers. "Thirty years have passed and we think it is time to release them."

Hinchey in the 1990s proposed similar legislation that forced the U.S. government to admit its knowledge of a 1973 Chilean military coup that ended in the assassination of that country’s elected socialist leader Salvador Allende.

Last year Hinchey introduced legislation in the House that would have forced the declassification of the Argentine documents, but the measure failed. After that he wrote President Obama in November, asking him to declassify the records by executive order.

"Thousands of families have waited more than 30 years to learn the fates of their loved ones," he wrote, "and we have an opportunity to make a contribution to truth and justice by helping to bring this troubling chapter in Argentina’s history to a close."

The State Department in 2002 declassified 4,700 documents pertaining to the Dirty War.

Carlotto and her group’s lawyers believe that one of those documents proves there was not only a systematic plan to appropriate children, but that it was sanctioned by the highest levels of power.

That document is a 1982 memo by Elliott Abrams, a former U.S. assistant secretary of state for human rights and humanitarian affairs, who is scheduled to testify here this month.

In that memo, Abrams wrote: "I raised with the ambassador the question of children in this context, such as children born to prisoners or children taken from their families during the Dirty War. While the disappeared were dead, these children were alive and this was in a sense the gravest humanitarian problem. The ambassador agreed completely and had already made this point to his foreign minister and the president. They had not rejected his view but had pointed on the problem, for example, of taking children from their adoptive parents."

Carlos Osorio, director of the Southern Cone Documentation Project at the National Security Archive at George Washington University, said in a November interview that the Abrams memo is key.

"The Grandmothers are pointing to this little nugget as evidence that declassified documents help to bring some justice in Argentina then, and thus they want to call for CIA, FBI and Pentagon declassification on Argentina," Osorio told Women’s eNews.

Lawyers in the case could not be reached to answer questions about the extent to which Abrams might be grilled about the memo.

Carlotto said another document from the State Department contains a transcription of a conversation between a U.S. official and Reinaldo Bignone, the general who headed the military junta. Parts of the transcription had been edited out, she said. She added that in December the U.S. embassy in Buenos Aires provided her with the full version.

She said that in the transcribed conversation Bignone acknowledges the systematic appropriation of children. The attorney for Carlotto’s group is on vacation and did not respond to a request to see the document by press time.

The outcome of the case could have enormous personal consequences for some 400 to 500 Argentines in their 20s and 30s, who the grandmothers estimate to be living under false identities here.

Many of them are unaware that their real parents were murdered and that they themselves were given to military families to raise them as their own.

In 1976, as a brutal military dictatorship here was jailing, torturing and killing dissidents, she was a tiny baby.

For years, growing up in Buenos Aires, she had no idea that a young couple named Hilda Ramona Torres and Roque Orlando Montenegro were two of those presumed subversives who lost their lives. As a young adult, Montenegro learned not only that they had been her biological parents, but that the man she knew as her father, Lt. Colonel Herman Tetzlaff, had murdered them and taken her as his own daughter under the invented name, Maria Sol.

Tetzlaff admitted to his deeds in 2000.

In 2010, Montenegro, after consenting to a DNA test, finally came to terms with what happened, changing her name along the way.

Montenegro told Women’s eNews that she supports Hinchey’s efforts to persuade Obama to declassify the records.

"There is sufficient evidence that the CIA was keeping records at the time about the dictatorship," she said. "They can help us show that there was a systematic appropriation of children."

This trial is just one of several seeking to document human rights abuses during the military dictatorship.

The trials began in 2007 after then-Argentine President Nestor Kirchner overturned two key amnesty laws that had long kept military officials from being prosecuted. As a result of the court cases, 802 military officials, police and civilians people have been indicted for crimes against humanity, and 243 have been found guilty, according to a report by the Argentine attorney general’s office

Fourteen trials are currently underway, and 10 more are set to start this year.

Not all Argentines are in favor of the trials.

Jorge Cadera, a 33-year-old taxi driver from Buenos Aires, echoed the sentiments of many when he said the country should look forward, not back.

"What does it help to bring the past up?" he asked. "With everything there is to fix, it doesn’t make sense to cause these problems. We should move on."

Would you like to Send Along a Link of This Story?
https://womensenewsp.wpengine.com/story/the-world/120122/stolen-babies-trial-awaits-us-documents

Kelly Hearn is a freelance writer whose work has appeared in publications including The Washington Post, National Geographic News, The Christian Science Monitor and Yale 360. 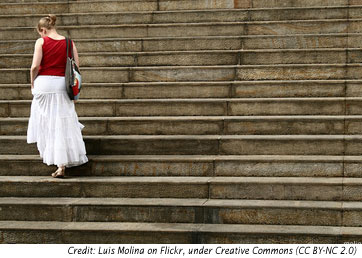 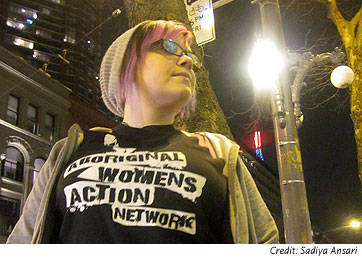