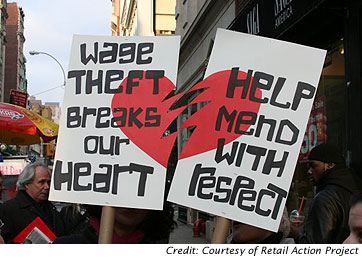 NEW YORK (WOMENSENEWS)–Female retail workers in New York are less likely than men to have health coverage and paid time off, as well as less likely to receive a promotion, a report issued today by the Retail Action Project finds.

The advocacy group also finds a gender-pay gap among the respondents, all of whom worked in non-unionized large stores or national chains.

While the outlook for all non-unionized retail workers is poor–often with a high turnover rate, low wages and lack of health benefits–women and minorities in particular face difficult obstacles.

In its survey of 436 workers–59 percent of whom were women–the New York-based group found that women report earning a median $9 per hour versus $10.13 for men. These disparities are amplified for female women of color: The data gathered indicates that 77 percent of Latinas and 42 percent of black women earn less than $10 per hour, while 39 percent of white women were paid at that rate.

Retail employs approximately 7.8 million women, almost 12 percent of working women in the United States and more than any other sector, according to the U.S. Bureau of Labor Statistics.

The report finds deterioration in the conditions for most of its surveyed pool, male and female, and points to unionized stores as a model for improving fairness in wages, scheduling and benefits.

"A union is one of the best ways to eliminate racial and gender discrimination in the workplace," authors say. "In order to propel both local and national economies forward, we must reverse the declining standards in the retail industry. As a leading industry in job growth, creating family-sustaining jobs in the retail industry must be a part of any strategy to address the growing inequality in America."

Only 29 percent of respondents at the non-unionized stores surveyed have health benefits; 28 percent of female respondents compared to 31 percent of men. For the majority of workers who did not receive insurance through their employer, about 25 percent live without insurance and 34 percent rely on government programs.

The report’s authors criticize recent government policies that "reward the use of a majority part-time work force and discourage the creation of sustainable retail careers."

Eligibility for benefits–including health insurance–is limited to include only workers explicitly designated as full-time, the minority of the retail work force, the report claims. The authors also say that many so-called part-time workers are working full-time hours (a median of 35 hours a week during high seasons) while being excluded from the benefit structure of health insurance, paid time off and sick days.

The conditions lead to a high turnover rate, but "retailers have calculated that the cost of hiring and training new employees is less than providing benefits to retain a steady work force — especially as most employees receive minimal training," the report says.

One female survey respondent, who requested not to be named to protect her employment, went without a raise for her first three years working at Lehman College Bookstore; she made $8 an hour. She told Women’s eNews that after all this time she was passed over for a promotion that went to a male co-worker, who had only been with the company for a year and a half. Though she told her boss she would give up her second job if promoted, her female manager recommended that she not be considered.

Scheduling practices, authors find, reflect nationwide trends with the creation of a "just-in-time" work force that often lacks employer-provided health insurance. Almost 60 percent of the retail work force surveyed was hired as part-time, temporary or holiday, and only 17 percent of workers surveyed have a set schedule, authors say. The vast majority, 70 percent, only know their schedules within a week.

Suppressed pay and promotions along with scheduling instability makes caring for family or remaining enrolled in school a significant challenge, further perpetuating income and educational gaps.

As for the female employee at Lehman College Bookstore, the store is now owned by a new company that guarantees raises, vacation and sick days.

"I’m much less stressed and I have advancement opportunities," she says, although she is still working two jobs while also completing her college education.

Report authors say the occupation of retail sales associate is one of six job categories estimated to experience the greatest job growth nationwide through 2018 and advocate turning them into living wage jobs with advancement opportunities. "Rather than restrict job creation, higher wages give our economy a greatly needed boost," they say.

Would you like to Send Along a Link of This Story?
https://womensenewsp.wpengine.com/story/equal-payfair-wage/120116/non-union-retail-workers-bear-costs-bias 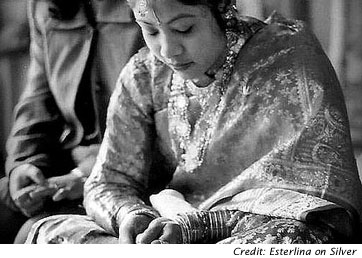