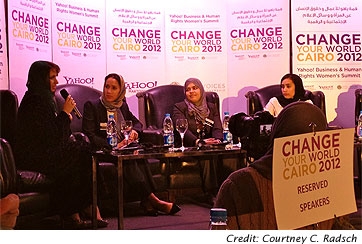 After a year of courageous digital leadership, female activists from the Middle East and North Africa–some of them Twitter superstars–met in Cairo last week. It was a chance to meet face-to-face, savor revolutionary success and weigh setbacks.

CAIRO, Egypt (WOMENSENEWS)–When hundreds of women who are active in the uprisings in the Middle East and North Africa met here last week to assess their use of digital media and technology, a20-year-old Libyan named Danya Bashir summed it up.

“I couldn’t have done this without social media,” Bashir told an audience at the Change Your World Cairo conference. “The world would not have known.”
During the Libyan uprising Bashir employed Twitter, the micro-blogging technology that transmits 140-character instant messages around the Web, to update journalists and activists around the world who couldn’t cover the NATO-backed popular uprising due to the severe dangers of the situation and travel restrictions imposed by then-president Moammar Gadhafi.
Bashir jokingly said she used to “spam” her updates to Egyptian-American media activist Mona Eltahawy, National Public Radio’s Andy Carvin and Arab commentator Sultan al Qassemi. Such recipients–who send dozens of tweets daily and boast tens of thousands of subscribers–amplified Bashir’s reports by resending them to their own robust social networks.
Eltahawy, who last November sent out Twitter messages just after being assaulted by Egyptian security forces during a demonstration, wasgreeted like a celebrity by many who only knew her from Twitter. A former Arabic editor for Women’s eNews, Eltahawy delivered the opening remarks of the gathering, with her hands still bandaged from the beatings.
“The power of women is in their stories,” she said. “They are not theories. They are real lives that, thanks to social networks, we are able to share and exchange.”
The meeting, which was conducted in Arabic and English, was co-sponsored by the business and human-rights program of Yahoo!, the Sunnyvale, Calif., web giant, and Vital Voices, a Washington-based women’s advocacy group. Planners intend it to be an annual gathering and hope to hold similar meetings in Southeast Asia, Latin America and the Middle East next year.

Some of the women’s stories this year have been about successful revolutionaries. One of the most notable is Yemeni journalist and human rights activist Tawakkul Karman, awarded a Nobel Peace Prize last year for her role in inspiring the democratic uprising in her country.
But severe crackdowns on pro-democracy activists have also beset countries, including Bahrain, Saudi Arabia, Syria and Yemen, where political rights and civil liberties have constricted in the past year.
Maria Al-Masani, a blogger and human rights activist who founded the online Yemen Rights Monitor, said she worries about the durability of gains made by women who defied home-bound traditions to take to the street.
“Women’s participation was valued during the revolution, but now, as top government positions are awarded, a female voice is seldom heard,” she said.
One voice that has not been silenced, however, is that of popular Bahraini journalist Lamees Dhaif, who was forced into exile following criticism of the Bahraini government’s harsh crackdown last February and March and continues to speak out against the ongoing violence from her temporary home in Dubai.
In a panel on journalism and the Internet, Dhaif said her government’s attempts to censor her in the traditional media were easily countered. She noted that she had nearly 60,000 followers on Twitter and 43,000 followers of her website. That gives her a much broader reach than any print publication in Bahrain.
“Now people are outspoken because of these tools,” said Dhaif.

Manal al-Sharif, another Twitter star with more than 56,000 followers, was well-known to the crowd for initiating a highly visible pro-driving campaign in Saudi Arabia, where female drivers are not accepted.
Sharif was jailed for nine days in June for calling on Saudi women to join her in breaking driving restrictions through the #women2drive campaign she launched last year. She continues to urge women to join her in overcoming the taboo on driving and press for the right to become licensed, not just as drivers but also as voters.
“We are blessed with the social media,” the blogger and women’s rights activist said at a kick-off panel.
The conference gave Sharif a chance to meet many of the women for whom she serves as a role model, but has never had a chance to meet in person.
Such online contacts, she said, inspire her to keep pushing for women’s rights. One woman, Sharif said, e-mailed to say she had been feeling like a hostage to immobility. But encouraged by Sharif’s driving campaign, she bought a car with darkly tinted windows and was teaching herself and her two young daughters how to drive.
“There is no law prohibiting women from driving,” said Sharif, explaining that the ban was cultural rather than legal.

Women’s empowerment and sexual harassment were conference themes.
Two of the Egyptian human rights groups at the event that focused on these issues were Harassmap, a volunteer organization confronting sexual harassment, and the nongovernmental Egyptian Initiative for Personal Rights, formed in 2002 and focused on the privacy rights of every human’s body and home.
Both groups said they struggled over their response to a blog post by Aliaa Magda Elmahdy, an Egyptian who gain notoriety for posting a naked picture of herself on her blog late last year to boldly claim her right to freedom of expression. But both groups said they would defend that right regardless of the content of expression.
The issue of parliamentary quotas was also raised at the conference. Several countries in the region have imposed quotas for female representation in parliamentary elections.
Egypt has passed a 25-percent quota law, for instance, and Libya requires 10-percent female participation. Tunisia’s new law requires party lists to alternate between men and women. According to a recent article in Foreign Policy, women are represented at twice the rate in Middle East countries with quotas than those without.
But the topic divided participants. Some argued against a quota system, saying elected representatives should be the best candidates regardless of gender. Others criticized any quotas that fell short of 50 percent, given that women are at least half of the population.

Would you like to Send Along a Link of This Story?
https://womensenewsp.wpengine.com/story/rape/120124/cameroon-rape-victims-confront-legal-gauntlet

Courtney C. Radsch is the program manager for the global Freedom of Expression campaign at Freedom House and was a moderator of the women, human rights and women’s rights panel at the Change Your World Cairo summit. Follow her on Twitter @courtneyr. 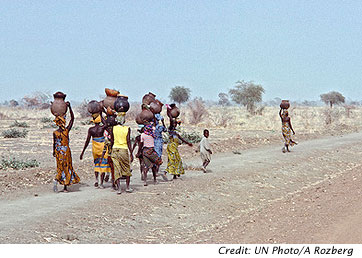 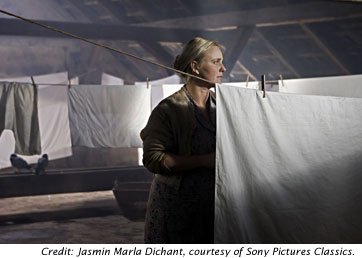