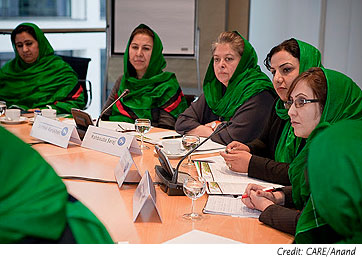 Imagine a world where women living directly with the realities of war help build the peace. Jacqueline O’Neill says three major events this month show that vision–and the ideals of “inclusive security”–gaining hold.

The South Sudan International Engagement Conference will bring together a number of governments to outline the development priorities for this fledgling nation. For the first time at such an event, a delegation of South Sudanese women from civil society will be recognized as official participants and formally invited to contribute to the vision of the future of their country.

For these women, this is an opportunity to help influence and partake in the management of oil revenues, the strengthening of government institutions, the delivery of education and health care and every aspect of nation building.

This event will follow hot on the heels of two other breakthroughs.

In Bonn, Germany, on Dec. 5, Selay Gaffar of both the Afghan Women’s Network and Women Waging Peace Network addressed the international community as it took stock of Afghanistan. Gaffar traveled to Bonn as a member of the official civil society delegation, which included 16 women out of 34 representatives. There was unprecedented representation of women at the event, with women in the Afghan government delegation reaching nearly 30 percent, including female ministers, deputy ministers and several members of parliament.

Delegates from the Afghan Women’s Network–nine women came to Bonn–offered some of the most concrete suggestions on how to enhance women’s inclusion in peace and security transition processes, and were welcomed by eight official country delegations and U.S. Secretary of State Hillary Clinton. They spoke of creating a national dialogue about reconciliation that would engage ordinary Afghan men and women in defining peace, and about how to support civil society-led monitoring of the security transition.

In Oslo, Norway, on Dec. 10, the Nobel Peace Prize ceremony recognized the critical role that women play in stabilizing nations. The Nobel Committee honored the "non-violent struggle for the safety of women" and "women’s rights to full participation in peace-building work." In bestowing this award, the Nobel Committee has shined a light on the essential work of women in preventing and stopping war across the globe.

The award serves as a reminder to policymakers that women are critical architects in building a lasting foundation for peace in every community and country. On the day the prize was awarded, women in more than 25 countries rallied through Rise with the Prize, a global campaign organized by The Institute for Inclusive Security, based in Washington, D.C. With activities ranging from a statement by national parliamentarians in Uganda to candlelight ceremonies in rural India, participants celebrated this year’s Nobel Prize and showed that there are thousands of women doing work that is as courageous and groundbreaking as that for which the three female laureates were honored.

Behind this triangle of achievement are many more women working tirelessly for peace. They are often the unsung heros behind the headlines. At The Institute for Inclusive Security, we’ve had the honor of knowing many of these women and working with them as they fight to determine the future of their countries.

Since 1999, our institute has advanced the concept of "inclusive security," the notion that peace processes must include all those who are working diligently to stabilize their communities; not just those who take up arms.

Research has shown that when women are at the table in the peace-building process, they broaden the set of issues addressed. They expand the debate beyond military action and power to incorporate social and humanitarian issues that improve the lives of people in their countries. For example, in Darfur women played an expansive role in the Darfur Peace Agreement by raising previously neglected issues such as food security and gaining consensus so there was a clear path forward.

Who are these women waging peace? Many of them are members of The Women Waging Peace Network, part of The Institute of Inclusive Security. They are 1,000 strong individuals in over 40 conflict zones.

In Oslo, two of our members, Liberian President Ellen Johnson Sirleaf and activist Leymah Gbowee, were honored as Nobel Peace Prize laureates. All our members share in the victory, knowing that they are making an impact, while simultaneously looking ahead to the work that remains.

A U.N. study has found that since 1992 only 2 percent of signatories to peace agreements have been women. No women have been appointed chief or lead peace mediator in U.N.-sponsored peace talks. Just this year, women have been kept out of new governments being formed across the Middle East and North Africa, despite their contributions to the democratic uprisings.

To turn these sobering statistics around, we have to keep constructing the new face of peace. We can’t be satisfied with catching just a glimpse of it on the margins.

Envision a world where peace is built instead of bartered, built by women who are on the ground living daily with the realities of war.

A decade ago, this vision seemed futuristic as women were often completely left out of the peace making process. Today, though it still needs to be sharpened, the role of women is coming into focus.

Would you like to Send Along a Link of This Story?
https://womensenewsp.wpengine.com/story/peace/111212/women-led-peace-reality-in-sudan-bonn-oslo

Jacqueline O’Neill is the director of The Institute for Inclusive Security. The institute uses research, training and advocacy to promote the inclusion of all stakeholders, particularly women, in peace processes. Previously, she worked at the UN Mission in Sudan and at Sudan’s Ahfad University for Women. 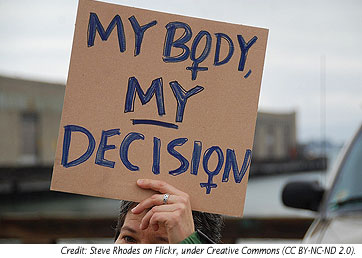