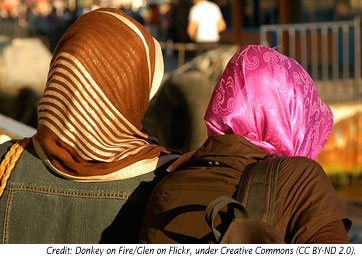 The veil is a polarizing symbol for France, Turkey, Saudi Arabia and Iran. Outside that fraught context, Hajer Naili finds an enlightened New York forum where women peacefully discuss the ways this cloth forms a common religious heritage.

NEW YORK (WOMENSENEWS)–The veil has contemporary society all stirred up.

In France and Turkey, where it is banned in public spaces, several women wanting to wear a headscarf because of their religious beliefs have found themselves in violation of the law.

In the 1990s, several controversies around the Islamic veil arose in France after students wearing headscarves in public high schools refused to take them off and were suspended. In March 2004, a law, sometimes referred to as "the veil law," was voted in by the French parliament forbidding the wearing of any "ostentatious" religious articles.

In Turkey, although over 95 percent of the population is Muslim, women cannot wear a veil while working in the public sector and other professions, such as law and journalism. The headscarf, also banned at universities, has started to be allowed since September 2010 after the ruling AK party brought its support for veiled female students.

In some Muslim-dominant countries, such as Saudi Arabia and Iran, every woman is required to wear a veil, including non-Muslims. In those cases, the veil becomes an oppressive cloth and women must wear one unless they are ready to face the Mutawwa (or religious police in Saudi Arabia), who often challenge women on this point.

Against this polarized, Islamic backdrop, a recent event at the Interchurch Center here helped bring a more universal and enlightened sense of the veil and the women who wear it.

The panel discussion about veiling accompanied an exhibit of 30 striking photographs– conceived by Lebanese American University’s Institute for Women’s Studies in the Arab World–showing various types of veiled women from the 19th century to the present who belong to the monotheistic religions.

At its heart, the panelists and photos created a fairly simple statement: The veil isn’t exclusive to Muslims. It’s shared by Christian and Jewish women. It’s a cloth that women from the three Abrahamic religions have as a common heritage.

Yes, it can be compulsory and as such a symbol of oppression.

But for the most part, veiling and the form of veiling is a woman’s choice.

The motives for wearing some form of head cover can be scriptural, cultural or a matter of personal identification.

One panelist, Sister Chala Marie Hill, is a Roman Catholic of the convent of the Franciscan Handmaids of Mary in Harlem, N.Y. Since she dedicated her life to God, Sister Hill has worn a gray-and-white habit and a veil that covers her hair. She says it identifies who she is to the world.

Sarah Sayeed, another panelist from the Interfaith Center of New York, said wearing a veil was a reminder of her Muslim identity and her relationship to God.

Panelist Bronya Shaffer, a member of Chabad.org, a Jewish group, wears a wig. She said Jewish law requires a married woman to cover her hair but that her way of doing that was her own choice.

Traditionally, in Christianity, women were enjoined to cover their heads in church, just as it is customary for men to remove their hat as a sign of respect.

Islam and Judaism, by contrast, have prescribed veiling at more times. For Muslim women it starts in adolescence, or the age of procreation. For Jewish women it starts after marriage, when they go outside or are not around family members.

None of the panelists went as far as French journalist Jules Barthelemy Saint-Hilaire, who wrote that the veil can excite the libido by leaving so much up to the imagination.

But all three women did insist that veiling was not intended to make a woman less attractive.

They all said it was about "modesty" and "being dignified."

"What is inner, that is what is dignified," Schaffer told Women’s eNews. "It is a sense of self-respect, self-dignity and that’s what gets projected. It has nothing to do with inhibition. A woman can do anything, be anything but within the context of Jewish law."

I cover my hair in accordance with the Islamic holy book, the Quran, which tells faithful women to protect their private parts and not to display their adornment "except what is apparent of it."

Some liberal interpretations say the headscarf is unnecessary, as long as women respect the sartorial modesty stipulated in the Quran. Most Islamic scholars, however, agree on the obligation for a woman to wear a veil, or hijab.

I decided to wear a head dress a few months ago, while living in New York. No one pushed me to do this, least of all my family, who live in France. When I told them about my decision over the phone my parents were nervous. They thought it could make me a target of discrimination.

So far, however, I have not had anything unpleasant happen to me. Mainly it’s a conversation starter. People have approached me on the street to ask about the meaning of my particular form of veiling.

I explain that as a Muslim woman I simply want to follow Islamic guidance. People often assume my family imposed the scarf on me or that it means I am married. I explain that a Muslim woman who wears a veil often does so by choice and there is no link between the veil and marriage in Islam.

As I listened to Sister Hill, Sayeed and Schaffer discuss their relation to this piece of cloth I found them sending a beautiful message of peace and co-existence among Christians, Muslims and Jews.

One response to “Interfaith Women Don Veil as Common Heritage” 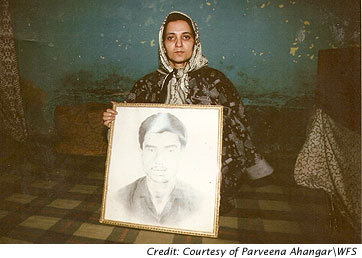 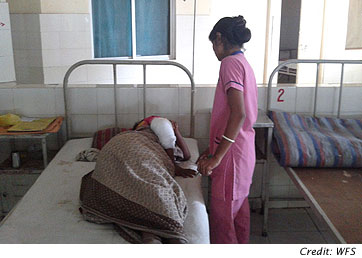