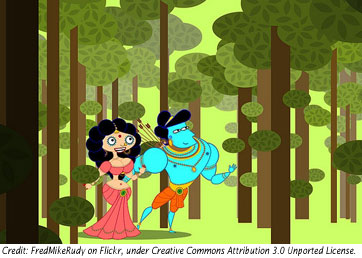 Religious epics in India are chock-a-block with patiently self-sacrificing women. In the past year, however, a trend has been accelerating for writers and artists to revise those characters in blockbuster novels, essays, films and theatrical scripts.

(WOMENSENEWS)–For generations, Indian women have been reared on religious epics, filled with patiently suffering, self-sacrificing women. But a new breed of writers–many of them women–are rewriting sacred scriptures.

But not without setting off intense protests from Hindu groups objecting to the new characterizations of women featured in ancient epics.

One of these modern versions, a retelling of the Ramayana by 27-year-old writer Samhita Arni with graphic artist Moyna Chitrakar, has just spent two weeks on the New York Times bestseller list for graphic novels.

The Ramayana is a sacred epic first written by the sage Valmiki in 500 B.C. that spawned hundreds of variations across India, Thailand, Cambodia and Indonesia.

Arni’s acclaimed "Sita’s Ramayana" retells the epic from the point of view of Sita, wife of the earthbound deity Prince Rama. Kidnapped by the demon Ravana, Sita is eventually rescued by Rama, but not until she has gone through a trial by fire to prove her purity. Arni’s novel portrays Sita as a strong, powerful woman who takes fate into her own hands.

Meanwhile writer Arshia Sattar, a self described feminist, has also released a new book called "Lost Loves," which looks at Rama and Sita as humans rather than gods and dissects Rama’s actions dispassionately.

This September, Indian-American filmmaker Virali Gokuldas premiered a play called "Janaki: Daughter of Dirt" in San Francisco, which features a modern Indian woman using Sita’s tale to make sense of her own life.

American filmmaker Nina Paley used the Ramayana as a parallel to the story of her own failed marriage in her 2008 animated film "Sita Sings the Blues."

The new versions of these epics are controversial.

In October, Delhi University decided to drop an essay by the late linguist and scholar A.K. Ramanujan from its syllabus, following violent protests by the student wing of the Hindu nationalist Bharatiya Janata Party.

The essay, "Three Hundred Ramayanas," talks about the many versions of the Ramayana, including some in which Sita is portrayed as Ravana’s daughter and another in which Ravana is actually a hero.

The university has been strongly criticized by academics and students for caving in to pressure from Hindutva groups, who say they will not allow any "blasphemous" versions of the Ramayana to be circulated.

In July and September this year, screenings of "Sita Sings the Blues" were cancelled in New York and Goa, India, following protests by Hindu groups who called the film "shameful" and "denigrating."

Despite protests, Arni believes that women need to "reclaim" the many versions of the Ramayana.

"Right-wing Hindu groups want to impose their own version of the Ramayana on us because it suits their political purposes," she says. "India has such a rich and diverse storytelling tradition, both oral and written. It would be a tragedy to lose it."

Arni is currently writing a speculative novel on the search for Sita, set in modern times, featuring a Rama with distinctly human failings. She admits to being a bit worried about how it will be received, but plans to go ahead anyway.

"India is getting more intolerant, but if we writers don’t stand up for artistic freedom, who will?" she says.

Would you like to Send Along a Link of This Story?
https://womensenewsp.wpengine.com/story/religion/111229/indians-rewrite-role-women-in-sacred-scripts

Kavitha Rao is a Bangalore-based freelance journalist who writes on culture, people and places. Her website is at www.kavitharao.net.

One response to “Indians Rewrite Role of Women in Sacred Scripts” 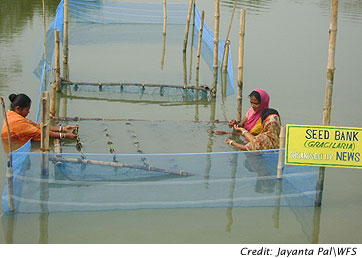