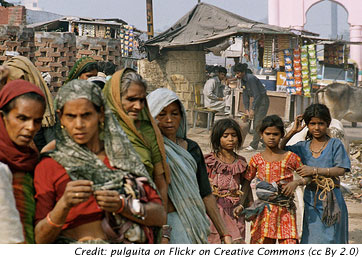 A few weeks back Susan Feiner spoke at a conference in Valladolid, Spain, to counter this week’s micro-credit summit there. Austerity programs like those proposed for Europe, she says, are women’s real nemesis, not the lack of tiny, high-priced loans.

Through loans of course.

Lending to weak, vulnerable, and very poor women is the rallying cry for those who argue that micro-credit empowers women.

And that’s why the Global Micro-Credit Summit begins today in Valladolid, Spain. During the next four days micro-lenders from all over the world will join some of the world’s largest banks in a shout out for debt: "Loans will set you free."

A quick refresher: Micro-credit became famous in the aftermath of the Bangladesh famine of the 1970s when Mohammed Yunis started lending tiny sums to women in hard-to-reach rural regions.

Because these women had no physical collateral for the loans, he organized them into "loan circles," so all the women in a group were responsible for each other’s debts.

This arrangement accounts for the extraordinarily high pay-back rates on micro-loans: If one member of a loan circle falls ill, or suffers any other circumstance that interferes with her ability to repay, other members must step in to make her payments or risk being denied loans in the future.

Enthusiasm for micro-credit swept through the international development community like a brush fire.

Here, many rejoiced, was a way to encourage work and unleash the long-stifled entrepreneurial spirits of the world’s poorest people. Millions of women around the world added work at handicraft production, sewing, consumer-electronics assembly, street vending or livestock care to their already-full schedule of fetching potable water, finding fire wood, tending crops and preparing food.

Between 1981 and 2005 the only sustained decrease in poverty occurred in China, the World Bank told us in a 2008 report. And China does not stand out as a micro-loan magnet.

In the rush to celebrate micro-credit, meanwhile, few asked why so many were so poor.

Had they been the least bit curious they would have discovered a host of deep institutional changes contributing to rise of mass poverty among rural women. Not least among these were the demands imposed on poor nations by the leaders of The World Bank and the International Monetary Fund.

Basically, the world’s poorest nations had become mired in debt.

Even though these countries often paid off the principal on these debts, they still owed millions in interest. And the banks wouldn’t let them off the hook. In stepped the World Bank and the IMF with new loans that paid off the banks. In exchange, borrower nations agreed to "structural adjustment programs" that withdrew essential public services.

In 1998 the Washington-based Institute for Policy Studies reported that virtually all developing countries–particularly in Latin America and Africa, and increasingly in the transition countries of east and central Europe–had either implemented or were in the process of implementing austerity programs.

Deepening poverty triggered mass migrations, often of men, out of the countryside to cities and towns where there might be a possibility of work for wages. This left women to maintain the day-to-day lives of their families.

Loans to destitute and desperate women–often at rates exceeding 30 percent, 40 percent and even 50 percent–responsible for feeding, clothing and educating themselves, their children, and dependent elders replaced social support for poor families that had previously come from governments.

Structural adjustment, another way of saying austerity, played a huge part in creating the situation micro-credit claimed it could solve.

Today, micro-lenders will gather with some of Europe’s largest banks to celebrate the successes of micro-credit.

Micro-lenders, like the banks that are "too big too fail" are bound to cast themselves as saviors this week; and might even start promoting their wares more aggressively in Portugal, Italy, Greece and Spain, where poverty is rising as these nation’s respond to their heavy levels of indebtedness.

They’ll say (as they’ve been saying to Greece), "in exchange for the loans you need to stay afloat you better get your fiscal house in order."

Guess what will happen?

The same thing, but this time in Europe.

Poverty and economic distress will intensify. More women and children will be hungry because governments will cut back on programs that help feed poor families.

Girls will drop out of school to take care of their younger siblings, as mothers work two or three jobs, or even migrate to distant cities to earn a few Euros. Cash-strapped rural families will be unable to hang onto their ancestral homes where they’ve tilled small plots of land for centuries.

The policies offered by the banks sponsoring the micro-credit fiesta in Valladolid this week echo the World Bank and International Monetary Fund policies of structural adjustment.

Women of the world watch out. Austerity does not feed families, pay the rent, or buy heating fuel.

Would you like to Send Along a Link of This Story?
https://womensenewsp.wpengine.com/story/equal-payfair-wage/111110/europe-beware-banks-bearing-micro-loans-poor

Susan F. Feiner is professor of economics and professor of women and gender studies at The University of Southern Maine in Portland. With Drucilla Baker she is the author of the award winning book "Liberating Economics: Feminist Perspectives on Families, Work and Globalization." She thanks the Office of International Cooperation for Development at the Universidad of Valladolid for the opportunity to speak about these pressing global issues.

Structural Adjustment, a Major Cause of Poverty:
http://www.globalissues.org/article/3/structural-adjustment-a-major-cause-of-poverty

One response to “Europe: Beware Banks Bearing Micro-Loans for Poor” 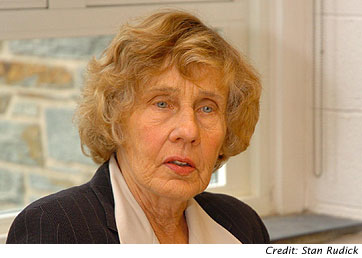