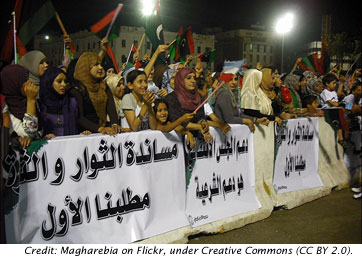 Libya’s long-awaited declaration of liberation excluded female voices and raised questions about how the tide might turn on matters of family law. The country’s interim leader faced immediate backlash for endorsing a return to unrestricted polygamy.

(WOMENSENEWS)–The mood couldn’t have been more festive as tens of thousands of Libyans came to hear acting president Mustafa Abdul-Jalil speak in Benghazi in what promised to be a historic speech setting the tone for the next stage of Libya’s future.

Men, women and children waved the Libyan revolution’s red, green and black flag and chanted songs celebrating the end of 42 years of tyranny under ex-leader Moammar Gadhafi, who was killed Oct. 20.

Three days later, after eight months of civil war pitting rebel fighters and defected soldiers against troops loyal to Gadhafi, the North African nation’s new leadership proudly declared its liberation. High ranking officials of the now governing National Transitional Council took the stage one after the other to pay passionate tribute to Libya’s martyrs–their sons and brothers, but also their mothers, their wives and sisters — building up momentum to Abdul-Jalil’s speech.

Not a single woman was on the stage to take credit for her role throughout the revolution or to set the tone on matters of direct personal relevance to women, such as the needs of war widows or the Libyan family code.

Libya’s current family law, partly based on the Maliki school of Sunni Islam, includes several progressive protections for women that are not found in personal status laws of other Arab countries, according to Freedom House International, an advocacy group based in Washington, D.C. It sets the minimum legal age for marriage at 20 and gives women the opportunity to negotiate their marriage rights before entering the agreement. Mothers by law get custody in divorce, while fathers remain financially responsible.

“It is particularly worrying that, at such a crucial moment of a new democracy, women don’t have a public voice,” said Marianne Mollman, senior policy adviser for Amnesty International, the London-based rights watchdog.

The absence of a female voice at the podium made it clear that women will have to fight if they want to be equal shareholders–or even just represented–in the transition to democracy, said Liesl Gerntholtz, director of the Women’s Rights Division of Human Rights Watch in New York.

“There have been disconcerting signs that women in Libya will have to fight for their place at the table,” Gerntholtz told Women’s eNews.

Among these signs, Gerntholtz noted the absence of women in the top ranks of the National Transitional Council, Libya’s interim government that must oversee the country’s transition to democracy, and in international meetings, including a major gathering that unfolded in New York in September to discuss a post-Gadhafi Libya.

While women were boxed off to the side during Libya’s liberation speech this week, that itself was not particularly concerning. By custom women and men often gather separately, including during many of the protests that erupted Feb. 17 in the religiously conservative city of Benghazi.

The real source of alarm came from Abdul-Jalil, a former justice minister who defected early in the revolt and a devout Muslim, who now chairs the National Transitional Council. One of the things he endorsed when he took the microphone was unrestricted polygamy, which is curtailed under the current marriage law but permissible in Islam.

“Any law that violates Sharia (Islamic law) is null and void legally,” he said in his speech, targeting the current law on marriage.

Abdul-Jalil also reiterated in his speech that the new Libya will turn to Sharia as the main source of legislation and emphasized that no law in contradiction with the Quran would stand. “The law of divorce and marriage . . . is contrary to Sharia and it is stopped,” he said.

That statement drew such outcry at home and abroad that Abdul-Jalil quickly backpedalled the next day, saying his comment on marriage was “just an example” and stressing that no laws had been done away with. The clarification, coupled with reassurances that Libyans are “moderate Muslims,” was welcomed in the West where there is a rising concern that the Arab Spring heralds a new era of Islamist leaders, particularly in Egypt, Tunisia and Libya.

“We are encouraged to see President Jalil make a clarification,” said U.S. State Department spokesperson Victoria Nuland. “The No. 1 thing is that universal human rights, rights for women, rights for minorities, right to due process, right to transparency be fully respected.”

Libya’s law of divorce, which in some Muslim countries requires no more than a man’s statement or even a written SMS text message to his wife in order to be upheld in court, also contains certain provisions protecting women and their property. Both men and women can initiate divorce and have the right to keep their property when the marriage ends. But in the absence of statistics, it is difficult to measure the gap between law and practice.

“Under Gadhafi, there were no laws that were reinforced, except the ones that personally benefited him and his family,” said Najla Aswad, a Libyan citizen living in Saudi Arabia. “As I live in Saudi Arabia, I know what it is like to live as a woman completely under Sharia law so I believe in order to move towards any form of democracy, we need to have a freely elected body that will start working on a constitution, and civil laws as a start.”

Speaking Out Against Polygamy

Gadhafi, who married twice and was always surrounded by women — be it his Amazonian bodyguards or Ukrainian nurses –spoke out against polygamy, a practice that occurs but is not widespread, according to Freedom House.

To take a second wife, Libyan law requires a man to “secure prior judicial permission based on the grounds of financial capacity. He must also obtain the written agreement of the first wife.

“Of all the problems Libya has faced in the last 42 years, the law on marriage was not one of them,” said a female Libyan journalist living in Cairo. “The fact that he chose to highlight this particular topic on Liberation Day is mind boggling.”

Some Libyans have argued that after the deaths of so many young men on the front–an estimated 50,000 were killed in the conflict–reinstating polygamy is a way to offer protection to the widows who were left behind.

“The state is responsible to look after these women,” said the journalist, who requested anonymity because her job doesn’t allow opinion on the region she covers. “Re-introducing polygamy is the state saying ‘you are not my problem,’ go find a man who will look after you. It’s a complete regression of the status of women.”

Would you like to Send Along a Link of This Story?
https://womensenewsp.wpengine.com/story/the-world/111027/libya-liberation-speech-raises-hackles-polygamy

Dominique Soguel is a contributing reporter and managing editor of Arabic Women’s eNews. 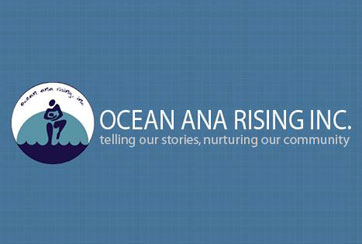