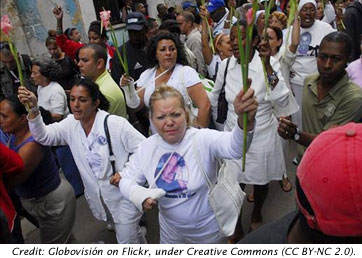 Relatives of political prisoners in Cuba–many of them women–are fighting to curb abuses they say family members suffer during incarceration. One of the most prominent opposition groups, Ladies in White, meets on Sundays.

(WOMENSENEWS)– Four women stood with anti-government signs in a well-trafficked square in Havana.

They were members of Ladies in White, a group that formed in 2003 after 75 political dissidents were jailed.

Dressed in white–the color of peace–they march to Catholic mass to pray for human rights and the release of relatives and loved ones in prison.

The group has been meeting on Sundays across Cuba for years. But this particular small demonstration a couple of months ago–on Aug. 23 in Havana–proved momentous. When a plain-clothes police officer came to break up the women, some nearby people defended the women and forced the officer to leave in search of backup.

It wasn’t the first time bystanders had aided the women, but because it was in such a busy area, it was the first time such an action was caught on video with cell-phone cameras and uploaded to YouTube the very next day.

"It was visible proof, released to an international audience over YouTube, that there is an increasing support for the resistance movement," said Aramis Perez, a leader of the Assembly of Cuban Resistance, based in Miami, Fla.

Often, he said, reports filed from Havana are censored or written by government supporters and describe activist groups as "small and fragmented."

Two days later Amnesty International, the London-based rights group, published a call to stop the repression of the Ladies in White.

Police and government officials have violently attacked individuals and groups of female political dissidents on at least 25 occasions this year–sometimes while the women were engaged in nonviolent protest, and other times while they were with their families at home–according to a report released by the Assembly of Cuban Resistance in August. The report, "Cuba: Violent Aggressions Against Women, Human Rights Defenders," was based on daily communication with activist groups in Cuba.

The resistance movement is carried out by a wide cross-section of Cuban citizens–urban, rural, farmers, students–but "women have been playing a leading role," said Perez.

One of those women is Laura Pollan, the leader of Women and White and the recipient of the European Parliament’s 2005 Sakharov Prize for Freedom of Thought. Pollan died on Oct.14 at age 63.

Another is Bertha Antunez who lives in exile in Florida.

Antunez used the podium to urge the international community to help women in Cuba who are working for human rights.

"These women, today, at this moment, risk their lives, put their bodies before the police violence," she told a roomful of people at the forum, organized by a coalition of international nongovernmental groups. "Their voices shout for freedom while they are brutally beaten and they continue to take to the streets."

Antunez said her activism was fueled by prison visits to her brother, released in 2007, after 17 years of incarceration in various prisons, making him one of the longest serving political prisoners in Cuba.

"Soldiers from the prison savagely beat my brother in my presence and in the presence of two children from our family. We were beaten too. On various occasions I had to resort to a hunger strike to save my brother’s life," she told the human rights activists, advocates and supporters.

In an interview with Women’s eNews, Antunez expanded on how those prison visits had motivated her.

"I got firsthand testimony from many prisoners and there were things I couldn’t believe" she said. "I never thought these abuses were taking place in my country. I knew there were injustices outside the prison because we are all victims of those; but this was torture."

A Cuban dissident group, the Cuban Democratic Directorate, based in Hialeah, Fla., reports that Antunez’s brother, Jorge Luis Garcia Perez, was arrested during a demonstration for yelling that communism was "an error and a utopia." His speech was considered "oral enemy propaganda," the report says. His sentence was extended several times for speaking back to guards and continuing to vocalize his political beliefs.

Antunez and relatives of other family members of political prisoners founded the National Movement of Civic Resistance "Pedro Luis Boitel" to fight abuse in prisons.

The group remains active and continues to organize peaceful protests, sit-ins and hunger strikes at prisons across the island.

This year, the incarceration of two of the group’s members and other recent crackdowns on dissidents spurred Human Rights Watch to issue statement in June saying that Cuban laws "criminalize virtually all forms of dissent, and grant officials extraordinary authority to penalize people who try to exercise their basic rights."

Would you like to Send Along a Link of This Story?
https://womensenewsp.wpengine.com/story/incarceration/111030/cuban-women-sundays-are-protest-marches

Maura Ewing is an editorial intern at Women’s eNews and is pursuing a master’s in Liberal Studies at The New School for Social Research.

One response to “For Cuban Women, Sundays Are for Protest Marches” 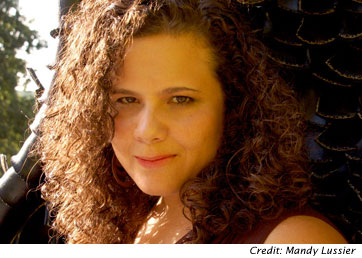 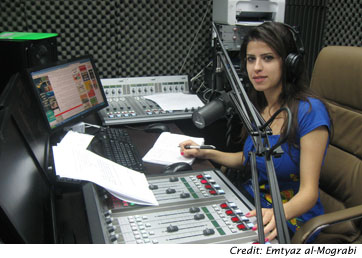