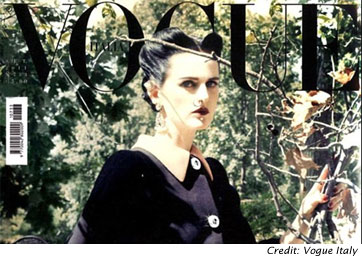 In conjunction with fashion week in Italy, the cover of fashion magazine Vogue features a model with a Photoshop waistline inspired by the Guinness Book of World Records. An editor defends the image and denies it could cause any harm.

She’s wearing a posh dress and a nose ring.

But it’s not her clothing or her accessories or her arresting expression that stand out. It’s her absurdly tiny waistline, measuring just 13 inches, cinching her roomy gown.

Once again Vogue Italy is doing what it can to astonish.

In the process it is also aggravating Fabiola De Clercq, founder of ABA, Anorexia and Bulimic Association, an Italian association based in Milan that helps anorexic girls resume a healthy life.

Anorexia and bulimia were the leading causes of death for young Italian women between 12 and 25 years old, Sisdca, the Italian society for eating disorders, found in a study published in June 2011.

"It is the worst way to attract readers with outrageous sensationalism," said De Clercq in Italian in a phone interview with Women’s eNews. "Considering that Italian fashion week is going on, Vogue Italy would have done everything in its power to shock and be ‘unique.’ This picture mortifies women’s bodies."

She said the common sense of Vogue Italy editors has been replaced by Photoshop, the software program widely used to enhance digital graphics.

De Clercq, a survivor of 20 years of anorexia, contends that anorexia is fuelled by a connection between female thinness and power ideals.

"Anorexia is such a widespread psychological disorder because, nowadays, thinness corresponds to women’s power," De Clercq said. "Exaggerated slimness is byword of a woman in total control over her life, someone who is even able to renounce a vital need: eating food….Vogue understood this deviant trend and showed it yet again."

She went on to call the concern for being thin an anthropologic phenomenon ingrained in Western women’s behavior. "Thinness became a significant part of a woman’s pattern that she can get whatever she wants."

Dr. Raffaele Ruocco, the head of research on eating disorders at the University of Perugia, is a well-known specialist on anorexic and bulimic issues. In a phone interview, he said fashion’s idealization of thinness is a major trigger of anorexia and retouched images are often assumed to be real-life women.

He called the falsification on the cover of Vogue Italy part of the problem.

Vogue Italy has drawn criticism in the past for excessive retouching of models’ photographs, but many of those controversial images also helped spur sales.

Carlo Ducci is the executive news director of the magazine. In a phone interview he said he wasn’t personally involved in determining the September cover, calling it stunning and harmless.

He said Tennant’s picture was inspired by Ethel Granger, an English woman who died in 1982 and was married to a corset maker. Her 13-inch waist was the smallest ever, according to the Guinness Book of World Records.

"Our magazine drew on reality. If this reality is perceived as bad, this is not our problem," Ducci said.

He added that the fashion magazine has always played with reality. "Vogue has a creative logic that can inspire women, but it is not the Holy Bible."

He said the image was too unusual to inspire other women to try to imitate it.

"Only one woman could achieve this record, so it is impossible for our readers to be able to emulate her," he said.

Editors of the Guinness Book of World Records, however, do say every record is breakable.

So critics can still wonder why, if one woman could achieve a 13-inch waistline, others might not be tempted to outdo her if a fashion magazine suggests that’s desirable. Emulation is also suggested by the use of "Avant-Garde" as caption wording for the photograph of Tennant, aka Granger. Avant-garde, after all, means someone in the vanguard, or leading a trend.

Would you like to Send Along a Link of This Story?
https://womensenewsp.wpengine.com/story/cultural-trendspopular-culture/110925/vogue-italys-cover-called-anorexic-in-fashion

Valeria Marchetti is an Italian journalist with a background in broadcasting. She is based in Rome. 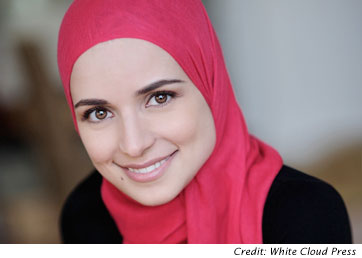 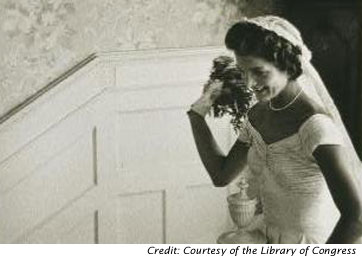