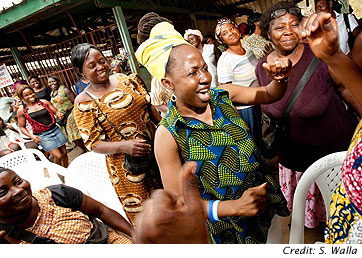 Cameroon’s sole female candidate in the October presidential elections isn’t letting kidnapping or water cannons stop her. She says her most solid support comes from young people and she’s trying to rouse the women’s vote.

She says she’s trying to rouse the women’s vote.

"Women are excited about having a woman candidate, but the challenge is to get them active," Walla said during a recent visit to the northwestern city of Bamenda. "We need to see them register, vote and seek to be voted across all political party lines."

Walla, who is running her campaign under the slogan "The time is now," said her main campaign activists were young people. She said getting women involved was more challenging.

Women hold only slightly more than 10 percent of the seats in Cameroon’s parliament and are nonexistent in the top leadership ranks of the military and local government.

Walla knows all too well the intimidation tactics used to discourage women’s political involvement in the authoritarian government.

"I was kidnapped on the 20th of May, 2011," said Walla, recounting some of the obstacles to her candidacy. "I had water cannons turned on me and I have had some forms of intimidation, too."

Diana Ambofei, vice regional chairwoman of the Social Democratic Front, Cameroon’s main opposition party in Cameroon’s Northwest region, can relate. She said death threats caused her to withdraw from her run for parliament in 2002.

Ambe Julia, divisional delegate of Elections Cameroon, an independent supervisory group, said that when her organization encouraged women to register to vote, the women said they needed to seek consent from their husbands. Since most women are farmers, she added, it’s hard to find them at home during door-to-door efforts.

Julia said women made up the majority of party members in Cameroon but had little access to political debates. They mainly cook food and provide entertainment during party events.

President Paul Biya has been in office for nearly three decades and altered Cameroon’s Constitution to run again this year.

One change in this election is that citizens living outside the country will be allowed to vote, The Associated Press reported July 11.

Walla, named by the World Bank in 2008 as one of seven leading female entrepreneurs in Africa, declared her candidacy in October 2010, and the Cameroon People’s Party endorsed her in April 2011. A social entrepreneur, she has worked with civil society during the past two decades to develop projects and policies to benefit Cameroonians, from farmers to motorbike drivers to people with disabilities.

She said women were the first group to hold a public demonstration against colonizers in the fight for Cameroon’s independence, but women faded into traditional roles within political party circles after the country gained independence from France in 1960 and Great Britain in 1961.

Although a couple of other women have run for president — one in 1992 and another in 2004 — Walla said they didn’t get as far as she has.

"My candidacy is the first to draw national and international attention," she said.

She said her priorities, if elected, would be advancing the rights of women, the disabled and the linguistic and ethnic minority.

"These people have been left out of the decision-making processes in the country," she said.

Walla, a board member of the World Entrepreneurship Forum, an international community of entrepreneurs, said she also planned on reviving Cameroon’s economy.

"Cameroon has tremendous natural and human resources," she said. "We have the potential to be a strong economic force on the African continent. We need to get our vibrant informal sector formal so that people can have decent work. Jobs are a major focus for my economic program. We need to take advantage of our geopolitical position to build [a] gateway into Central Africa."

She said she also planned to rebuild social services.

Martin Fon Yembe, a political analyst and staff writer for the Political Punch, a Cameroonian political newsletter, said Liberian President Ellen Johnson Sirleaf won the election "on the heels of very wild civil war," proving that a woman could prevail in the rough sport of politics.

But he said intimidation and foul play might obstruct Walla’s chances of winning.

"Given a level playing field, Kah Walla will singlehandedly defeat the other candidates in the election," he said. "But, alas, there is blackmail, slander, corruption and all those vices, which are already playing against her and any other female candidates in Cameroon."

Michelle Hain volunteers as the organizational development adviser for the Community Initiative for Sustainable Development, COMINSUD, an organization dedicated to sustainable development in the Northwest region of Cameroon. She said male domination of formal politics has meant that Cameroonian women have concentrated their efforts in civil society organizations, such as parent-teacher associations.

Fon Nsoh, COMINSUD coordinator, said that the organization had been looking to engage women in politics through the Democracy and Empowerment of Women, DEW, project.

"In the Northwest region of Cameroon, in over 100 opportunities for a woman to be an MP, we have had just one female parliamentarian in the past 15 years," he said. "Through the DEW project, we are identifying and promoting women and youth candidates to run in elections. Our interest is not in pushing the agenda of any political party. We are interested in seeing women in elected positions."

Nsoh said that Cameroon’s Constitution sets no quota for women in parliament, as other countries in the region have done.

"Some women do not trust the political environment," he said. "That’s why we have voter apathy. Stereotypes need to be uplifted. Also, we still have many records of outright intimidation against women daring [to get] into politics by men. Election campaigns could be expensive for most women, who most times don’t have pockets as deep as those of men," he said.

Nsoh said his group hoped to encourage about 1,000 female and young candidates to run in the municipal and legislative elections in 2012.

Walla said she already considers her bid a success because it has helped change attitudes about women in politics in Cameroon.

"I am honored to know that an 8-year-old pupil wrote my name as her model in a class exercise when their teacher asked them to cite the name of someone who inspires them," she said. "I also have women who walk up to me and thank me for taking a bold step and making a statement that women can aspire and dream big dreams."

Would you like to Send Along a Link of This Story?
https://womensenewsp.wpengine.com/story/campaign-trail/110809/cameroons-kah-walla-presses-her-presidential-bid

Comfort Mussa joined Global Press Institute’s Cameroon News Desk in 2011. Through her articles, she aims to insert the voice of poor and marginalized communities into national and international development debates. 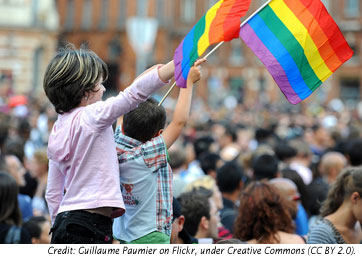