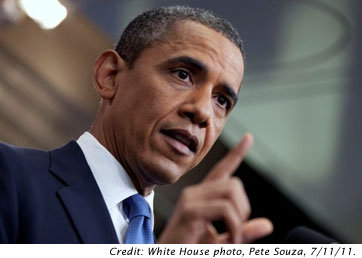 (WOMENSENEWS)–President Barack Obama reportedly left talks on deficit reduction late Wednesday with the warning that Social Security checks might not go out next month if lawmakers can’t find a way to raise the government’s borrowing limit before a default on Aug. 2.

Advocates for women’s financial security find that worrisome. But while a default could delay checks by days or months, the president’s offer to lower cost-of-living increases for older Americans could cause worse damage by shrinking benefits for generations.

Obama urged congressional Democrats Monday to back his plan to make cuts in the cost-of-living adjustments for Social Security beneficiaries in exchange for Republican support to raise taxes in a deal to increase the national debt ceiling.

Maria Freese, director of government relations of the Washington-based National Committee to Protect Social Security and Medicare, objects to that bargain.

"Proposing cuts in a self-financed program paid for by Americans throughout their working lives to get Republicans to close tax loopholes and end tax breaks for the wealthy few is not shared sacrifice," she said in a telephone interview.

Advocates for maintaining the safety net for elderly women, children and other groups served by entitlement programs argue that the deficit has spun out of control because the United States has spent $1.3 trillion on the wars in Afghanistan and Iraq. Tax revenues also have plummeted during the recent recession–the most severe since the 1929 crash–because of the Bush-era tax cuts on the country’s top earners.

Republicans argue that making cuts in military spending, which represents 21 percent of the federal budget, won’t lead to long-term solvency. They favor cuts in entitlement programs, such as Social Security ($761 billion of the total budget) and Medicare ($468 billion of the total budget), because over the next 30 years the percentage of the labor force under 55 will stagnate, providing less payroll taxes to fund these programs. They also oppose raising taxes because the economy is so fragile.

"Women are more dependent on Social Security than are men because they live longer and are less likely to have pensions and other assets because their jobs paid less and they spent time taking care of families," said Freese.

Her committee–which helped stop the George W. Bush administration from privatizing Social Security in 2005–plans to submit 700,000 letters to the White House this weekend opposing inclusion of Social Security in Obama’s plan to decrease borrowing by as much as $4 trillion over the next decade.

"Social Security should be off the bargaining table because it has not contributed one penny to the deficit or the national debt," said Freese. "The program has a $2.6 trillion surplus that will enable every American to receive full benefits for the next 25 years."

Social Security beneficiaries have not received a cost-of-living increase for the last two years.

Republicans contend that the Consumer Price Index for Urban Wage and Clerical Workers overestimates the cost of living. They want to replace it with the "chained" cost of living price index, a formula that takes into account that when faced with higher prices, consumers change their buying habits by substituting less costly goods for expensive items.

The Congressional Budget Office estimates that the "chained" cost of living index would save more than $110 billion over 10 years.

If the chained consumer price index is adopted, a woman who received a benefit of $1,100 at age 65–approximately the median monthly benefit of all single women at age 65–would receive $56 less per month at age 75, according to a report by the Washington-based National Women’s Law Center.

"That may not sound like a big cut to some members of Congress, but it is translated to a loss of more than a week of food per month," said Joan Entmacher, vice president for family economic security at the law center and co-author of the report. "At age 90 that would mean $87 per month, an equivalent of 20 weeks of food a year."

Ellen A. Bruce, immediate past president of the Washington-based Older Women’s League, known as OWL, urged Congress to take steps to strengthen Social Security, not destroy it.

"Instead of decreasing COLA payments, a better way to ensure continued benefits for Social Security beneficiaries would be to remove the cap," she said in a telephone interview.

By "the cap," Bruce was referring to the point at which incomes stop being subject to taxation.

Earnings above $106,800 are exempt from the payroll tax even though that is where most of the wage growth has occurred in the past two decades. Removing the cap would make cuts unnecessary by eliminating all or nearly all of Social Security’s long-term shortfall depending on how the change is implemented.

Moreover, Bruce said the current cost-of-living adjustment underestimates the impact of inflation on the elderly because it measures changes in the spending of urban wage earners and clerical workers, a younger and healthier group whose spending patterns differ from those of retirees and people with disabilities who make up the bulk of Social Security beneficiaries.

OWL and other groups support using an inflation index developed for retirees by the Washington-based Women’s Institute for a Secure Retirement (WISER) and the University of Massachusetts at Boston.

The index indicates that senior elderly renters on average need $20,300 a year to cover their basic living expenses because they have higher health care costs than younger people.

About 40 percent of today’s Social Security benefit, on average, is spent on out-of-pocket health care costs even with Medicare. This amount is expected to increase over time because health care prices are rising faster than overall prices.

"Cost-of-living allowances will be even more important to future retirees because the retirement age for those born after 1943 has been raised," Bruce said. "Unemployment also takes its toll on the ability of women to save for retirement. In June, the unemployment rate for women increased to 8.6 percent; more workers are jobless for six months or more."

OWL, which has 34 chapters across the nation that advocate for mid-life and older women, and the National Organization for Women, the largest organization of women’s rights activists in the United States, are concerned that the chained price index formula may be incorporated into the deficit reduction plan that the Obama administration and Republican congressional leaders are rushing to forge before Aug. 2, when the nation is expected to default unless the government’s borrowing limit is raised.

"The chained consumer price index masquerades as a technical fix, but it is a benefit cut pure and simple," said Terry O’Neill, president of NOW, in a letter to the 500,000 contributing members of her organization where she urged them to contact Obama and Congress to oppose the cuts.

Seventy House Democrats, including 24 women, have signed a letter to Obama opposing changing the formula used to calculate COLA. In 2008, Obama pledged to retain the current formula unlike his Republican challenger, Sen. John McCain of Arizona.

Would you like to Send Along a Link of This Story?
https://womensenewsp.wpengine.com/story/retirement/110714/obama-draws-fire-chaining-social-security 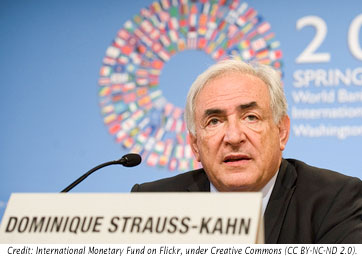 Obama Urged to Save Programs; LGBT Hate Crimes Up