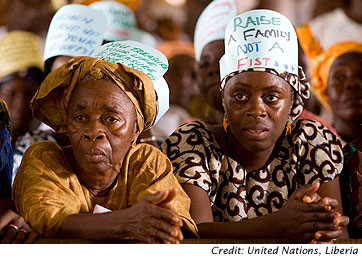 Rape continues to be the most frequently reported serious crime in Liberia. A new multipronged approach is underway to reduce sexual and gender-based violence.

MONROVIA, Liberia (WOMENSENEWS)–Korlu, a young mother of two, lives on the outskirts of Monrovia, the capital here.

A high school dropout, Korlu, who declined to give her last name for safety reasons, says when she was a teen, she became pregnant.

"My parents put me out of their house because they couldn’t bear the shame of me getting pregnant," she says.

She says when she was 17 she moved in with the baby’s father and he began to beat her. Korlu says she accepted the beatings until she heard women talking on the radio one day about how sexual and gender-based violence was not acceptable.

"It was tough," Korlu says. "They were speaking directly about me."

The women on the radio were from the Liberia Women Media Action Committee, which promotes women’s rights through the media. She says the radio program encouraged her to report domestic violence to the police.

"Before my husband would beat me and I would accept it," she says. "But nowadays, I report my husband to the police when he beats on me or tries to beat me because I know it is domestic violence. He doesn’t beat me anymore," she says with a smile.

The Ministry of Gender and Development also has a special unit dedicated to tackling sexual and gender-based violence, the Gender-Based Violence Task Force, which aims to coordinate violence prevention and response.

Despite the end of the nation’s civil war, many Liberian women still face violence daily.

While combatants were the principal perpetrators of sexual violence during the war, now husbands, partners, family members and teachers are mostly responsible, according to the joint report. Rape continues to be the most frequently reported serious crime here, with nearly half of the cases reported in 2007 involving children under 18.

Almost half–45 percent–of Liberian women ages 15 to 49 said they had experienced physical violence, according to the 2007 Liberian Demographic and Health Survey, the most recent such survey. Gender-based violence also includes sexual violence, verbal abuse, restrictions in freedom of movement and withholding of funds.

Women are socialized to accept, tolerate, rationalize and remain silent about violence here, according to the survey. Liberia’s weak justice system, pervasive poverty and a lack of economic opportunities for perpetrators have made the country especially vulnerable to sexual and gender-based violence, according to UNICEF.

However, efforts of the women’s media committee and other women’s organizations are beginning to show results.

Scott Johnson, a female journalist and member of the Liberia Women Media Action Committee, says the efforts have helped girls and women like Korlu to reject violence.

"I am happy that I can hear a 12-year-old girl stand out and talk about her rights as a woman, which was never the case before," she says.

The Association of Female Lawyers of Liberia is another nongovernmental organization working to put an end to sexual and gender-based violence in Liberia.

"Our role in stopping sexual and gender-based violence is advocating for women who have been violated and to represent victims at the court," says Zeor Daylue Bernard, a lawyer and the organization’s president.

She says her organization’s campaigns have influenced the justice system here.

The rape law was also amended to increase the age of consent from 16 to 18 and the penalty for violating this, a second-degree felony, from seven to 10 years in prison, according to the Liberian Demographic and Health Survey. The penalty for gang rape and rape of a minor under 18, first-degree felonies, is now life in prison.

"The unit is the first of its kind in Liberia, and through the unit women have access to justice and can now brave the storm to report cases of sexual and gender-based violence," he says.

The unit also has a hotline.

"Sometimes we receive three to five calls daily," he says.

The Women and Child Protection Section at the Liberia National Police is another effort by the state to end violence against women. Ruth Kolleh, a section police officer, says they receive sexual and gender-based violence cases almost daily and now take action.

"We send cases to court, arrest perpetrators and make peace when necessary," she says.

Would you like to Send Along a Link of This Story?
https://womensenewsp.wpengine.com/story/rape/110624/liberia-tackles-sexual-violence-head

Laura Golakeh reports for Global Press Institute’s Liberia News Desk. She aims to highlight women’s issues and give a voice to the voiceless through her stories. 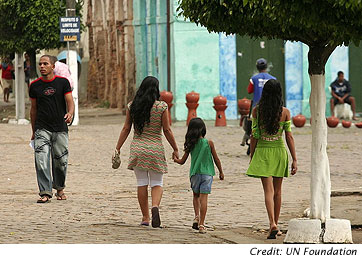