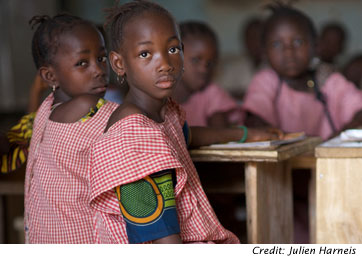 Ivorians Who Married Young Warn Others of Hazards

Female teens in the countryside of Ivory Coast often leave school to start families with older men. It’s a financial strategy that many women here say they have lived to regret.

ABOISSO, Ivory Coast (WOMENSENEWS)–Affoue Yobouet, 17, a mother of two, says she doesn’t regret choosing marriage over education. She says marrying an older man, who is more than 30 years her senior, was the best option to attain financial security.

But her older sister, Beatrice Yobouet, makes a scathing attack on the decision.

"I have advised her, but she will not listen," she says. "If for nothing at all, my own life is an example she was supposed to avoid. But she is stubborn and stupid."

Beatrice Yobouet says she has four children and has been abandoned by three men. She says she is now rebuilding her life with her third son’s father but wishes she–and her younger sister–had stayed in school.

But Affoue Yobouet says older men are the best bet for financial security.

"I just go with who can take care of me," Affoue Yobouet says. "I don’t mind who he is or what he does so far as my needs are supplied!"

She lives in a house with 30 of her relatives in Koffikro-Affema, a small rural commune in Aboisso, a department in the southeastern corner of Ivory Coast. Her older sister, two aunts, brothers, cousins, their wives and children share a home that has just three bedrooms, a hall and a large porch.

She says she dropped out of school at age 13 because her uncle, who used to pay for her fees and books because her parents died when she was young, couldn’t afford for her to continue to junior high school and high school.

Affoue Yobouet says her husband, her younger daughter’s father, has many farms and looks very young, even though he is 50. She says his children like her and show her respect and with his help she can also take care of her own children.

"I can now feed my children," she says.

Soon after independence in 1960, the government set the legal age of consent to marriage at 20 for men, 18 for women and 21 for couples without parental consent. But the law is widely ignored in a society where many say that marrying young is the cultural norm.

When female teens become eligible for early marriage, their school enrollment drops off sharply. While 66 percent of girls here enroll in primary school, just 19 percent go on to secondary school, according to UNICEF.

In an attempt to deter early marriage, public education here is free and primary school compulsory. But families still have to pay for school supplies and miscellaneous fees, according to UNICEF.

Civil conflict since 2002 and a disputed presidential election and resulting armed conflict this year have also caused many schools to close. Nearly 800,000 children were still waiting to return to school as of March 2011, according to UNICEF, who is working with partner organizations to help schools reopen.

Amid all this, many female teens in rural parts of the country say marrying older men is their best shot at financial security. Like the Yobouet sisters, they choose to start families rather than complete their education.

Nearly half, 49 percent, of people in Ivory Coast were living in poverty as of 2008, according to a 2011 World Bank report. As violence and political instability have increased since 2002, a rising portion of the population–now 13 percent–lives on less than $1.25 a day.

Dr. Rene Oka, a local pediatrician, says young women rarely have money to pay for prenatal care. Some have never seen a gynecologist and their children have no medical history. Oka says the young women can give birth to up to seven children, with between half to none surviving. She says the young mothers become vulnerable to diseases because of a lack of postnatal care.

Births to women ages 15 to 19 have the highest risk of infant and child mortality and a higher risk of maternal morbidity and mortality, according to the World Health Organization and the World Bank.

Negative outcomes of adolescent pregnancy are also associated with many other health problems, such as anemia, malaria, HIV and other sexually transmitted infections, postpartum hemorrhage and mental disorders such as depression, according to the World Health Organization. Up to 65 percent of women with obstetric fistulas, a hole in the vagina or rectum caused by obstructed labor, developed them as adolescents.

Djenebou Diarra, from northeastern Ivory Coast and now living in Abidjan, the nation’s capital, says education is the solution. She says she learned from her mistakes early enough to redeem her children’s future.

Sitting in the kitchen, Diarra picks up a square jewelry box on the gas cooker, removes the lid and extracts pictures of her two daughters. They have their mother’s straight and fierce look in their innocent faces.

"I told their father that my daughters will not be like me because life is becoming harder, and if I want them to live a good life, I have to show them how to succeed," she says. "He laughed at me and asked me how this will happen with me having no job."

Diarra says she decided to learn how to properly care for children so she begged the headmistress at the local kindergarten to let her clean the school and wash the children’s dishes.

"There, [I] learned how to change rich people[‘s] babies, the things they use–diapers, wipers, feeding bottles and the different kind of milk–the time the children eat, play and sleep," she says.

She says her friends doubted what she would learn since she was already a mother of two, but she says she observed a lot.

"I realized I did not give the minimum to my children," she says. "I was using a large plastic under the cloth on which they sleep so they will not wet the whole mat and make the room smell, while I could have used Pampers if I had the money. I will not even talk of the food."

She says the headmistress taught her a lot and helped her to get her first babysitting job in the town, where she earned her own income and learned how to cook foreign dishes.

She eventually moved to Abidjan, the country’s largest city, to live with a family and take care of their son, the house and the cooking.

"I came to Abidjan in 2008 because the salary is good here," she says. "[The] last two years I learned how to sew after working hours."

She says that this is the last family she will babysit for and she plans to move home soon.

"Next year I will be starting my own workshop . . . so I can work and take care of my children," she says. "Their life will be different from then."

Would you like to Send Along a Link of This Story?
https://womensenewsp.wpengine.com/story/marriagedivorce/110614/ivorians-who-married-young-warn-others-hazards

One response to “Ivorians Who Married Young Warn Others of Hazards” 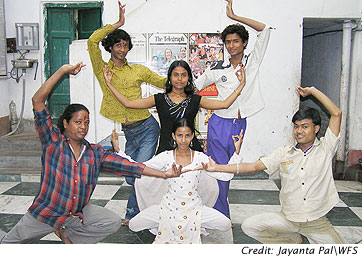 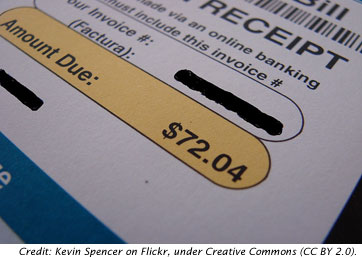