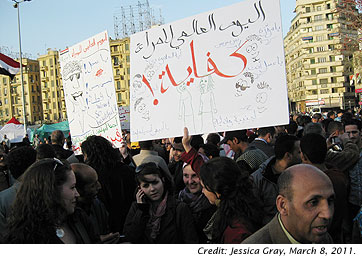 Women’s rights organizers in Cairo suffered a setback on International Women’s Day on March 8. Instead of holding a large rally in Tahrir Square, they were beaten back by hundreds of antagonistic men.

Instead, less than a 100 showed up and those who did spent just over two hours being harassed and insulted in the very square they helped liberate.

Doing their best to ignore the taunts, several small groups of women clung to colorful signs with slogans in English and Arabic.

“I’d like to be able to walk down the streets, free of fear, free of judgment and that’s it,” said Rehaam Romero, a 23-year-old copy editor. She held a sign with the words “Equality, Education and Empowerment” and a hand-drawn Egyptian flag.

But her enthusiasm quickly faded after arriving in Tahrir Square, where she found hundreds of men crowding women holding signs and chanting for the women to leave.

“I’ve never been as afraid as I am now in all my years in Egypt,” she said, watching men deride women standing nearby and yell: “The people want to bring women down!”

Even the most stalwart participants left after the military fired shots into the air to break up a fight at the edge of the square and almost caused a stampede.

Many activists on Twitter claim that the rally was deliberately targeted by thugs and regime loyalists that were also reportedly causing mischief at Coptic protests held throughout the capital on Tuesday.

Whatever the cause, the events were a disappointment for organizers.

In an interview with Women’s eNews before the march, Aalam Wassef, one of the event’s organizers from Women 4 Democracy, said the demonstration symbolized the “New Egypt” his group hoped to form in the wake of former President Hosni Mubarak’s three-decade reign.

“During the revolution, we witnessed an amazing sense of unity among the young and old, the rich and poor, Muslim and Christian, but there was something that happened that no one put into words, that men and women had joined together for their freedom,” said Wassef, who is also a co-founder of the group, which was established during the revolution.

Wassef described the organization as a collective, without leadership or a set of rigid demands, much like the revolution itself. Its goal is to bring democracy to Egypt, which Wassef believes will herald positive change for women because democracy inherently protects the rights of individuals.

Most important, Women 4 Democracy wants to help ensure the people who brought down the regime have a voice in the new government as well as any constitutional amendments. He said Egyptians are in a unique position to keep the pressure on Egypt’s transitional government and military council, both of whom have promised to usher in a nation free of emergency rule and oppression.

“Women’s voices were very powerful all through the revolution. So (our march) is not a separate movement from the revolution. It’s the continuation of what started on Jan. 25,” he added. Several of the online bloggers, Tweeters, journalists and activists behind the first protests were women.

Hoda Badran, chairperson of the Alliance for Arab Women, a women’s right group based in Cairo, says keeping women’s issues on the radar is not enough. Specific amendments to the constitution and electoral law need to be enshrined to ensure women get an opportunity to participate in the new government.

“We have to be careful because many times women participate in the first part of the revolution and then after it’s finished, the women are pushed back. So we are formulating groups of women and coalitions to demand to be part of everything,” said Badran. “We were upset because the committee formed to change the 10 articles of the constitution did not have any women.”

She says one way to do this is voting by political party lists that include at least one female candidate for each position.

Badran said there are more groups and nongovernmental organizations devoted to women’s issues in Egypt than ever before, but bringing about change won’t be easy because there are still many people who feel women are not suited to leadership positions.

“The political scene has many obstacles that do not allow women to win in election campaigns,” she said. “We are (hoping) that the new constitution will take into consideration that equality will permeate all articles . . . We will have to be careful that the next parliament will include very qualified women.”

Would you like to Send Along a Link of This Story?
https://womensenewsp.wpengine.com/story/cultural-trendspopular-culture/110308/harassers-chase-womens-march-tahrir-square

Jessica Gray is a Canadian journalist reporting on the Middle East from Cairo, Egypt. 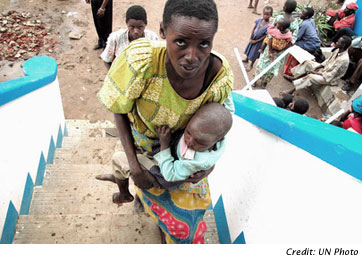