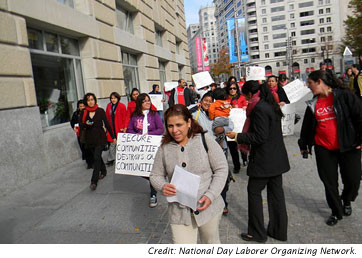 Secure Communities is the name of an expanding federal immigration program to deport convicts living in the U.S. illegally. Immigrant advocates say it’s undermining a federal law that protects crime victims from having to reveal their citizenship status.

NEW YORK (WOMENSENEWS)–Safe Horizons, the largest assistance agency for victims of domestic violence in New York City, has long advised clients to contact the police, even if they are undocumented immigrants.

"We want people to report crimes, but on the other hand, we don’t want them to be innocently picked up and deported for doing what an ordinary citizen would do," Neugebaeur said.

The program, Secure Communities, grants state and local police access to Department of Homeland Security’s immigration databases to crosscheck fingerprints when they make an arrest. U.S. Immigration and Customs Enforcement (ICE), a sub-agency, is then alerted to the arrest if the person is found to be undocumented.

Designed to identify and deport dangerous, undocumented immigrants with a criminal history, Secure Communities has removed about 58,300 convicts from the United States since its pilot launch in late 2008, according to ICE.

But 28 percent of the people transferred to ICE custody under Secure Communities from October 2008 through June 2010 were non-criminals, according to ICE figures. Some of the detained people–an unknown number–are victims of domestic and sexual violence.

While federal law protects crime victims from having to reveal their immigration status, if these victims are arrested or have been arrested in the past Secure Communities now discloses that.

This can affect victims in a scenario where a police officer arrives at the home and can’t communicate with the couple. Police may arrest both parties or even arrest the victim if the abuser speaks English and twists the series of events that led to the police call.

Victims are also subject to "revenge arrests," when abusers call the police and accuse them of perpetuating the violence.

"The man says, ‘Look she scratched me, I didn’t do anything.’ So the woman gets arrested and if undocumented, she gets reported to ICE," Neugebaeur said. "How can I as a lawyer say now in good conscience, free and clear, ‘Don’t worry about anything, call the police,’ because if you call the police, you can be reported to immigration services."

Secure Communities is now present in counties in 38 states. In New York it has been implemented in two counties and is set to expand to all counties by 2013. While New York was among the states that had been considering opting out of the federal program, former-Gov. David Patterson signed the Secure Communities agreement before he left office at the end of December 2010.

Department of Homeland Security Secretary Janet Napolitano said in October 2010 that opting out wasn’t an option.

However, a coalition of immigration advocacy groups recently obtained 15,000 agency documents from ICE–many of them internal e-mails–which reveal that states do likely have the local authority to shut out the controversial program. The Associated Press also obtained the documents independently and reported on them Feb. 16.

The documents also show that ICE has not received any evidence "to support the claim that domestic violence victims will be afraid to report crimes," according to a draft document, outlined in an e-mail answering questions from an Associated Press reporter in July 2010.

"Domestic violence is a crime and removing aliens convicted of such crimes helps protect victims," an ICE communications officer then wrote, according to the document.

Sarahi Uribe, a policy coordinator of the National Day Laborer Organizing Network, one of three groups that jointly filed a Freedom of Information Act request for the documents, says the program is already instilling fear in undocumented violence victims and that they are "being swept up in the mix" of detentions across the country.

She pointed to one high-profile case in Maryland, in which Maria Bolanos, an undocumented immigrant from El Salvador, called the police during an altercation with her partner. The responding police officer saw phone cards on a table inside her house and charged her with illegally selling them to a neighbor. The charges were eventually dropped, but Bolanos was reported to ICE and is still facing deportation orders.

The Southern Coalition for Social Justice, a pro-bono legal aid society in Durham, N.C., where Secure Communities is already in place, has represented 16 detained women, all survivors of domestic and/or sexual violence, since May 2010, according to paralegal Rebecca Fontaine.

Safe Horizons would not have the capacity to represent women who are held in detention, says Neugebaeur, given the size of her four-person supporting staff. But her colleague, Michael Polenberg, vice president of Safe Horizon’s government affairs section, added that they expect a decrease in their clients altogether.

"It’s common for the batterer to say, ‘If you try to report me, I will report you’ and you will get detained and taken away from your children," Polenberg said. "But for hundreds, if not thousands, of women hearing that from their batters, that will now be technically correct. And with the fear this will instill in victims, we can imagine that we won’t even be seeing these people anymore."

Would you like to Send Along a Link of This Story?
https://womensenewsp.wpengine.com/story/immigration/110223/homeland-security-law-called-hazardous-victims 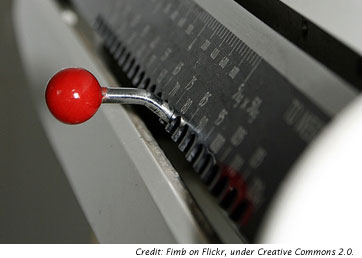 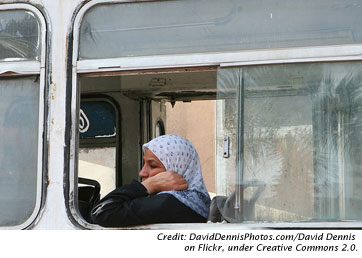