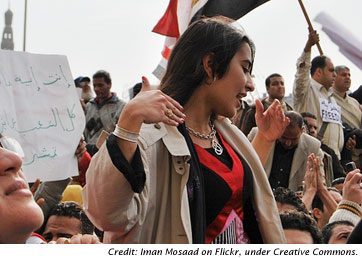 Women who have been joining the Egyptian protests to oust Mubarak minimize the risk that the Islamist Muslim Brotherhood could dominate a future government. If the revolution succeeds, they look forward to playing a part in the transition.

(WOMENSENEWS)–For Egyptian women in the March of a Million and other street protests to oust authoritarian President Hosni Mubarak, the sometimes deadly demonstrations have been a show of force.

“Women are key actors in this historical moment of Egypt,” Mozn Hassan, executive director of the Cairo-based Nazra for Feminist Studies, wrote Women’s eNews at 5 p.m. on Feb. 2, moments after the Egyptian army fired warning shots in Cairo in a bid to break up violent clashes. “Women are giving a statement that they are working closely with men to change Egypt.”

As a swelling opposition movement clamors for Mubarak’s departure by Friday, the protests have turned increasingly dangerous, with armed men on camels and horses tearing through demonstrations as pro- and anti-ruling regime rallies clashed.

On Wednesday, Nobel laureate Mohamed ElBaradei, the former head of the U.N. nuclear agency who is providing the leading voice of the political uprising, expressed concern about a possible “bloodbath” by the armed forces of an increasingly desperate regime.

Rights activists have put Egypt’s death toll at over 300 people and the injured at around 500. Human Rights Watch said on Tuesday it had verified 80 deaths at two Cairo hospitals, another 36 in Alexandria and 13 in the port city of Suez, all protest flashpoints.

As authorities scrambled to shut out satellite news channel Al-Jazeera and unplug Internet and cell phone providers, men and women marched out again to the heart of Cairo yesterday morning, which marked the ninth day of continuous demonstrations.

On Feb. 1 the two providers of Web-based communication launched a phone-to-tweet platform to help protestors work around the government’s tightening grip on media and cell phone communications.

The protest movement–powered by a mix of Islamists and pro-democracy activists from across the political spectrum–demands regime change and has rejected Mubarak’s bid to remain in office until the conclusion of his term in September.

While protesters have not produced a detailed agenda for the post-Mubarak era, Western and Israeli leaders have expressed concern over the potential role of an empowered Muslim Brotherhood, linking it to Iran’s theocracy and a loss of women’s rights.

The Muslim Brotherhood, an international Islamist movement and the best organized opposition to Mubarak’s regime, is formally banned in Egypt but some of its members, including women, have participated in local elections, running as independents.

Azza Soliman, at the Center for Egyptian Women Legal Assistance, is one of many activists underscoring the interreligious and national character of Egypt’s unrelenting pro-democracy rallies.

“I want you to know that during the past demonstrations not once has there been an Islamic slogan,” she said in a Feb. 2 email. “None of the opposition leaders would attribute this revolution to himself as we witness a popular uprising by the youth of Egypt, which are regular citizens oppressed by Mubarak’s regime for 30 years.”

Soliman added the movement’s leadership is aware and confident in putting together a national coalition to reform the Egyptian constitution and uphold the principles of citizenship and establish a civil state in Egypt.

Women’s stance at Tahrir (Liberation) Square in central Cairo and their presence in protests across the country is also making an online splash. Women of Egypt, a Facebook group, created a photo gallery to document women’s role at the historic hour.

The uprising has spurred solidarity protests outside Egyptian embassy premises across the Middle East, with large showings in the capital cities of Jordan, Lebanon and Yemen, as well as the world.

There have been blackouts.

But the power of Egypt’s new tech-savvy generation is shining through and perhaps best captured by the image of a young girl in Cairo with a banner depicting a computer. An arrow sends a desktop icon in the image Mubarak’s face straight into the trash can.

The call for democracy not only crossed gender lines, it is also changing street conduct. Nazra for Feminist Studies’ Hassan highlighted that women had been able to protest freely without men to protect them and without confronting the usual sexual harassment rampant on Cairo’s streets.

“Egyptians citizens gave a message of civility,” she said. “During all the last days, no single sexual harassment incident occurred and people were aware of that.”

On Feb. 1 women were widely visible on TV; donning sunglasses, hijabs and burkas, wardrobes that mirror the colorful fabric of Egyptian society. Mothers betting on the movement’s success brought their daughters out to the streets hoping to witness the coming dawn of democracy.

While the protests have at times turned dangerous and deadly, the unified stance taken by men and women brought a sense of relief to Hibaaq Osman, founder and CEO of Karama (Dignity), a coalition of partners building a movement to end violence against women in the Middle East and North Africa.

In a blog post early on Feb. 2, she wrote proudly about the high turn out of women in the previous day’s demonstration.

“Amidst the chaos…we have seen people of all backgrounds, religions, and occupations come together. But more than this, we have watched as men and women dissolved the gender barrier that has long been held between them.”

Would you like to Send Along a Link of This Story?
https://womensenewsp.wpengine.com/story/the-world/110203/egyptian-women-lay-claim-revolutionary-role

The Best Egypt Protest Signs From Around the World:
http://www.buzzfeed.com/mjs538/the-best-egypt-protest-signs-from-around-the-world?awesm=awe.sm_5G0zzandutm_content=awesm-tweet-button-horizontalandutm_medium=awe.sm-twitterandutm_source=direct-awe.sm 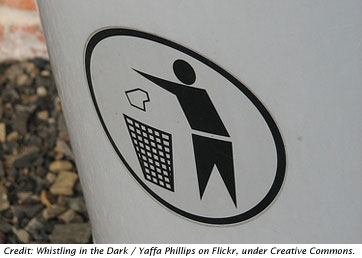