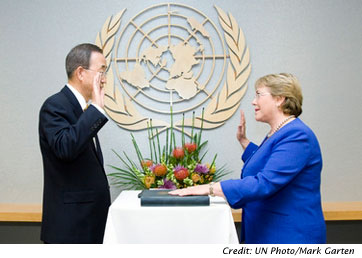 Funding commitments for global maternal health, the most lagging U.N. Millennium Development Goal, were predictably disappointing this week. But Michelle Bachelet’s first appearance as head of the women’s “superagency” raised some spirits.

UNITED NATIONS (WOMENSENEWS)–Financial pledges and policy commitments to scale up health and family planning services for women in 25 developing countries rolled out Wednesday, during the last lap of the three-day Millennium Development Goals review summit.

Donors’ answer to the United Nations’ request for a $169 billion women and children’s health plan fell predictably short at $40 billion, with about half of that committed at previous events.

Of the eight development goals, MDG No. 5–to reduce maternal deaths by 2015 by three-quarters from 1990 levels–is widely seen as the most lagging target.

A silver lining to an otherwise cloudy event for women’s health advocacy was provided by Michelle Bachelet, the popular former president of Chile who was recently named to lead a new U.N. "superagency" for women called U.N. Women. The agency officially launches Jan. 2, 2011, but Bachelet is already several days into the job.

"I’m a very realistic person and I am completely aware of the challenges for U.N. Women," Bachelet told a Sept. 22 press briefing, speaking for the first time in her new role. "But on the other hand, U.N. Women was supported by an enormous number of member states and I will be calling on those political commitments to become a reality."

Bachelet enjoyed a warm reception among reporters. She said the biggest problem for women are employment disparities that leave them holding only 40 percent of formal jobs outside of agriculture on a global scale.

U.N. Women might be able to make up some of the shortfall in money to improve girls’ education and women’s health through an integrated approach. Supporters think this approach will work better than one that separates "women’s" targets into the specialized areas of health and education.

"We’re applauding the fact that this U.N. agency has come into fruition," Joanna Kerr, executive director of ActionAid, a London-based advocacy organization, told Women’s eNews. "You cannot tackle the issues of health or fundamental rights of women without looking at all the structural causes of discrimination and poverty."

U.N. Women will incorporate the four existing U.N. gender agencies. It will launch in 2011 with a starting annual budget that many regard as inadequate: $500 million. That’s expected to scale up to $1 billion within five years.

With lagging progress on MDG No. 5 high in the news headlines, countries, foundations and private corporations pledged $40 billion for Ban’s "Global Strategy on Women and Children’s Health."

The strategy is said to prevent 33 million unwanted pregnancies by 2015, but ActionAid’s Kerr said it could also create a trap that makes it "very, very easy to fall into the ‘women solely as the mother’ issue."

Also, only about half of the $40 billion was pledged this week, said Emma Seery, who leads Oxfam International’s delegation on the Millennium Development Goals.

The rest was carried over from June’s G-8 Summit, a meeting of the world’s eight most economically-advanced countries, and other events.

"We need to see some new money to really make this work," said Seery.

Liberia announced free universal access to health services for women. The Congo said it will introduce free obstetric care and free access to Caesarean sections by 2015. 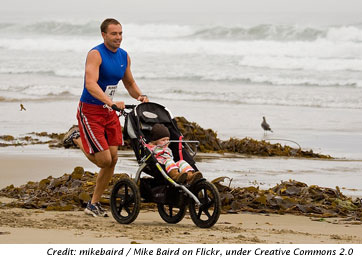 I Will Not Write a Blog for Infant Mortality Awareness Month