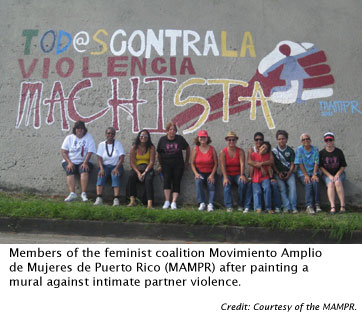 Advocates blame the situation on inadequate funding for women’s rights policies and weak political support for implementing the law. They direct particular criticism at the Office of the Women’s Advocate, formed in 2001 to establish public policies with a gender perspective.

Nahomi Galindo, a board member of Puerto Rico para Tod@s, an advocacy group for lesbian, gay, bisexual and transgendered people, charges the Office of the Women’s Advocate with complacency.

Verónica Rivera Torres, vice president of the Women’s Commission of the Bar Association of Puerto Rico in San Juan, said that the Women’s Advocate should fight for the funds that were cut under a major tightening budget in 2009.

The nongovernmental organizations "are the only hope right now, the shelters, the ones that offer financial services," Rivera Torres said. "But they are also in crisis because the Office of the Women’s Advocate has had to cut its budget and therefore cannot distribute funds to these organizations."

But an international survey that compared women’s lives on the island, a U.S. territory, to other nations indicates that more services, not cuts, are needed. It concluded that a Puerto Rican woman is more likely to be killed by an intimate partner than women in 35 of the countries surveyed in 2006. The report was published this year by the Reina Sofía Center, an international research center on violence located in Valencia, Spain.

The survey found an improving trend, with the prevalence of women killed by an intimate partner in Puerto Rico down by over 12 percent between 2000 and 2006.

The trend may be going in the opposite direction this year, however. In August 2010 the annual death toll was already 15, close to the total of 17 in 2009. Six women were murdered in the month of June alone.

Activists think too little is being done to reduce the number of femicides.

The Movimiento Amplio de Mujeres de Puerto Rico-MAMPR (General Organization of Women of Puerto Rico), a rights coalition, has denounced the government for not doing more to confront this issue.

On International Women’s Day this year, March 8, coalition members visited the offices of female legislators and heads of agencies. They gave them gift boxes containing women’s clothes that symbolized the absence of gender perspective in legislation and public policies.

One of the "honored" public officials was Feliciano, the head of the Office of the Women’s Advocate.

The group has organized artistic performances and demonstrations to raise awareness. In one case they protested in scanty costumes in front of the Office of the Women’s Advocate as part of the performance "Deprived Muses" to denounce the government’s neglect of women’s and gender issues. The group recently convened a male performance, "Men Sweeping Sexism," in front of the Capitol, in which men carried brooms that symbolically swept sexism away.

Island In Midst of Severe Crisis

Amárilis Pagán, executive director of the Caguas-based Proyecto Matria, an advocacy group for survivors of domestic and sexual violence, says those problems–along with inaction on the part of pro-statehood Republican Luis Fortuño’s government–have worsened the situation.

"The climate is so tense that it foments violence at all levels of our society, but especially domestic violence," said Pagán. "This is not a priority for the government either, contrary to previous years when we had specific campaigns that condemned domestic violence and made it clear that perpetrators would be punished. But right now, not even the Office of the Women’s Advocate has had a prominent or proactive role. There is a general sense of impunity."

She also criticized the government’s support for fundamentalist views through groups such as "Promise Keepers," an international Christian organization that describes itself as "dedicated to introducing men to Jesus Christ as their savior and lord, and then helping them to grow as Christians."

The U.S. National Organization for Women has described the group as focused on the control of women and imposing conservative social values.

In 1989, Puerto Rico approved one of the first and most progressive laws against domestic violence in Latin America and the Caribbean. It provides civil protective orders for victims and criminalizes physical and emotional violence perpetrated by partners or ex-partners legally married or not. It also eliminates the right of a married man to non-consensual sexual intercourse with his wife or partner.

Firuzeh Shokooh Valle is a journalist from Puerto Rico.