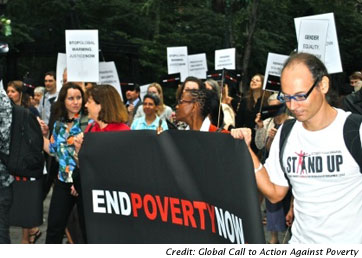 The 10-year checkup on the U. N. Millennium Development Goals is coming up in September. Ahead of that meeting, civil society groups are editing an outcome document with an eye to ending the segregated treatment of women’s rights.

UNITED NATIONS (WOMENSENEWS)–It’s a commonplace maxim in international policy circles by now to say that helping women and girls is the most foolproof method of achieving sustainable development.

But women’s advocacy groups here worry the concept might get short shrift when global leaders convene on Sept. 20 for the Millennium Development Goals Summit to assess progress of the goals over the past 10 years.

The early worries are generated by a "draft outcome" document that has been circulating since June re-affirming nations’ pledges to meet these eight major goals, commonly known as the MDGs, by 2015.

The document finds goal No. 1–cutting 1990 poverty rates in half by 2015–on track. If reached it will leave 920 million people living under the international poverty line.

But goal No. 5, to improve maternal health, is way off track. Maternal deaths dropped by less than 1 percent between 1990 and 2005 globally, according to the U.N.’s 2008 MDGs report, making the goal of a three-quarters reduction of 1990 figures in five years appear remote.

The disparity, critics say, shows that women’s rights are being given less consideration.

A major flaw, she says, is the treatment of gender equality and women’s empowerment as a "key goal in itself" and not as a "basic human right." Truscott and her team have produced an edited version of the document with a stronger human rights focus.

Their amendments go beyond recognizing gender equality as essential to achieving the Millennium Development Goals, as well as "fundamental for development, peace and security." They call for women’s empowerment to recognized as a "fundamental value and an issue of social justice" that should gain support in the new composite entity, U.N. Women, which is comprised of four existing U.N. gender offices.

Human rights inclusions in the document shouldn’t be controversial, Truscott says, given widespread international acceptance of the historic Beijing Platform of Action, adopted at the United Nations Conference on Women in 1995, which establishes women’s rights as human rights.

The emphasis on women’s rights as human rights includes the hot-button issue of abortion.

Amnesty International is a member of the Global Call to Action Against Poverty, an international civil society coalition with 162 partners in 130 countries.

In the lead-up to the September MDG summit, organizers have lobbied for gendered language and gender-specific commitments to be imbedded throughout the summit’s outcome document, not bracketed into women-specific sections.

Their criticism targets the structure of the MDGs, which lump women’s special issues into two of the eight goals: maternal mortality reductions under No. 5 and the elimination of gender disparity in primary and secondary education by 2015 under No. 3.

"It’s of course not a bad thing to make a strong statement about maternal health, except if it is made in exclusivity," said Lysa John, campaign director of Global Call to Action Against Poverty. "It’s not an issue you can work on in isolation. It’s not just about access to a hospital or medical care, it’s nutrition, education, sexual and reproductive rights and much more at all stages of a woman’s life."

In other words, the two goals that focus specifically on women can only be fully pursued by addressing women’s special needs throughout every layer of social policy planning.

Letty Chiwara, the United Nation Development Fund for Women’s chief of the Africa Division, is also anxious to see the draft document include specific, itemized goals for women.

Chiwara wants specifics, such as more funding for women living with HIV/AIDS and an increase in female participation in governments, added to the document.

The final wording of the document depends on the 150 member nations who participate in the September gathering, says Denmark’s envoy to the U.N. Carlsten Staur, a co-facilitator of the outcome document.

"Our task is to realistically see what we can achieve and what we can call a fair balance of the text," Staur told Women’s eNews. "There may have to be some trade-offs, where you cannot accommodate all views in one area. It will always be a compromise." 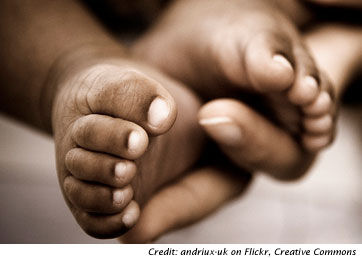