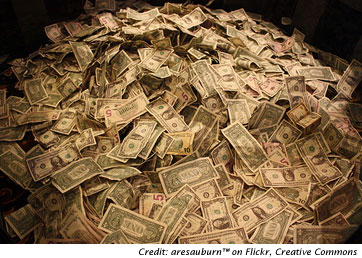 The federal deficit might not sound like a feminine topic, but economist Susan Feiner says women can’t leave it up to the guys running the U.S. Treasury.

(WOMENSENEWS)–Sex and federal deficits have a lot in common.

For one thing, religion and Wall Street–bastions of virtually unchecked male power–oppose both. Religions like to link sin to women’s sexual behavior while Wall Street rails against the evils of federal deficits.

At the risk of sounding like a heretic, I am here to say: In an economic downturn, federal deficits are a girl’s best friend. Without them unemployment will get worse and state budgets will shrink and dismantle numerous social services that are essential to women’s well-being.

The federal government’s decision to fund–or not fund–state budgets connects sex and deficits.

This is just one reason why women should favor increases in the federal deficit since that’s the only way states can balance their budgets.

States deliver the bulk of direct services–education, fire and police, health, child welfare, recreation, food assistance–that keep whole communities functioning. These services are particularly crucial for women because of our inordinate caretaking responsibilities for the young, elderly and sick.

States have been slashing spending and programs for two years now and are under the gun to keep doing so, since the states, unlike the federal government, must by law balance their budgets by cutting spending (or raising taxes) when revenues fall.

"Budget difficulties have led at least 45 states to reduce services to their residents, including some of their most vulnerable families and individuals," according to Washington, D.C.-based Center on Budget and Priorities. The center reports that states closed budget gaps of $215 billion in 2009 and 2010 and that balancing state budgets for 2011 necessitated another $144 billion in spending cuts and-or tax increases. In 2012, state shortfalls are likely to amount to $120 billion.

Taking all this money–half a trillion–out of circulation hurts women disproportionately and spreads economic hardship. "When states cut spending, they lay off employees, cancel contracts with vendors, eliminate or lower payments to businesses and nonprofit organizations that provide direct services and cut benefit payments to individuals," the center says.

This is particularly hard at a time when 55 percent of households have either lost jobs, wages or hours in the 30 months since the onset of this recession.

Deficit-hawks say deficit-financed stimulus spending to curb the pain of this recession is like Ma and Pa borrowing too much against the family farm.

But Timothy Geithner, secretary of the Treasury, the official with the power to decide how much and when the Treasury should borrow, ain’t Ma.

The federal government, unlike a household, is "sovereign in its own currency," which means it can create money to meet whatever bills are deemed necessary.

When its spending exceeds income a Treasury clerk just goes "click, click, click" and a check is issued to cover the spending of Vermont or California, the Department of Education or the U.S. Environmental Protection Agency.

It’s common to think that the government must issue bonds in capital markets to raise money to cover its shortfalls. And in this line of thinking, federal deficits are creating a huge overhang of Treasury debt that the country, some day, might not be able to pay.

But floating Treasury bonds aren’t actually required. It’s just done to keep bankers happy. If the Treasury decided to spend in excess of revenue and not create new federal debt, the deficit would just be carried on the Treasury’s books. But bankers like to buy Treasury bonds because they’re risk free and the government has always paid its debts. So when banks have cash they don’t want to lend to Ma or Pa, they buy Treasury bonds. It’s much better than stuffing it into the mattress.

If the Treasury simply created money for the states and carried a negative balance forward, new purchasing power would be pumped into the economy. Then the incomes of households and firms would rise, so individuals and businesses wouldn’t need expensive bank loans to keep them afloat.

This is a major bummer for Wall Street. So bankers spin yarns about the evils of deficits.

The United States has run deficits pretty much continuously since the founding of the republic.

In over 200 years the budget has been balanced or in surplus only six times. The sky hasn’t fallen. Hell hasn’t frozen over. Our first-born were spared.

Each period of budgetary balance lasted only briefly. Then we crashed.

Even if the Treasury borrows to cover states’ needs (versus running its account in the red), the U.S. government is not–contrary to some alarmists–peddling "too much debt." If that were true, capital markets for that debt would react with rising interest rates, but today’s interest rates are historically low. Even Milton Friedman, the very economist responsible for the theory that deficits cause inflation, said that when unemployment is high this link doesn’t hold.

So the really worrying deficit these days is the jobs deficit.

At least 31 per cent of U.S. workers are "contingent." Such work has all the characteristics of "women’s work." It is insecure, poorly paid and carries few benefits.

Work-force experts predict that contingent labor could rise to as much as 30 to 50 percent of the entire U.S. work force, triple the 13 percent it was estimated to be in 2008. If this happens, the feminized poor will be everybody.

Federal deficits can help reverse this trend. Washington politicians have to tell the Treasury to create the funds needed to avert financial disaster for the masses of Americans who depend on paychecks.

That’s why I applaud Congress for passing a $26 billion package last week to help states pay teachers and other government workers such as firefighters and police. But they must do more–this bill provides less than 20 percent of what the states need.

Reducing the federal deficit is not the equivalent of getting one’s household finances in order. In fact, it is the opposite. Curtailing federal spending when there are unprecedented millions unemployed makes deficits worse. When government spending falls, people lose their jobs, incomes fall and tax revenues plummet.

Stimulating economic activity via deficit spending should not require the blessing of the banks, economists or fiscal conservatives, any more than sex–recreational, procreative, straight, gay, queer or polymorphous–requires the sanction of the church, temple or mosque.

Susan F. Feiner is professor of women’s studies and of economics at the University of Southern Maine. She is co-author of the 2004 book, "Liberating Economics: Feminist Perspectives on Families, Work and Globalization." 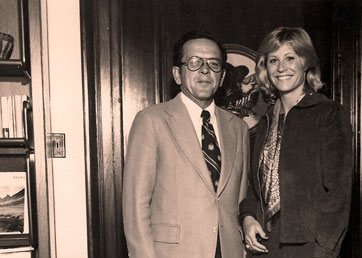 Ted Stevens Was Guardian Angel of Women in Sports