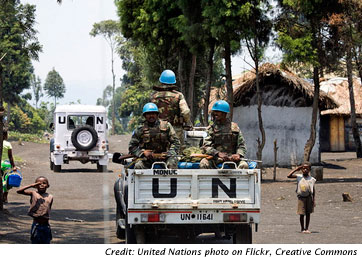 UNITED NATIONS (WOMENSENEWS)–President Joseph Kabila of the Democratic Republic of Congo would like to see the U.N. start drawing out its peacekeeping forces in June and be completely gone by August 2011.

Margot Wallstrom, the secretary general’s special representative for sexual violence in conflict, thinks otherwise, and told the U.N. Security Council so before last week’s visit by council members and other diplomats to the Democratic Republic of Congo.

"It will not help the fight against sexual violence," Wallstrom said last month in New York after she briefed the Security Council following her nine-day April trip to the country.

Wallstrom said the Democratic Republic of Congo’s legal frameworks for protecting women are robust. They include a 2006 law against sexual violence, a national strategy to combat sexual violence and a policy of zero tolerance for rapes, murder, theft and other criminal acts by the national army.

But resources for enforcement fall far short, said Wallstrom. She illustrated the point for the Security Council by recalling how 39 police officers in the Women and Child Protection Unit in Goma, the regional capital of North Kivu, share one motorbike. Violent offenders, once apprehended, ride on the back of the bike and are then held in a small shed.

Kabila has said that he would like to see peacekeepers begin to withdraw next month to coincide with the 50th anniversary of the Democratic Republic of Congo’s independence from Belgian colonial rule on June 30. Under his schedule, they would pull out entirely by August of next year. Elections are planned for 2011.

U.N. peacekeepers have been in the Democratic Republic of Congo for more than 10 years and the mission, which cost about $1.4 billion last year, has approximately 20,000 members, making it the world’s largest peacekeeping mission.

The U.N. Security Council visited the Democratic Republic of Congo last weekend to discuss with Kabila and his government the continued presence of peacekeepers in the vast central African nation, which has been mired in bloody and ongoing conflicts since the mid-1990s.

Though the Congolese government signed a ceasefire with 22 armed groups in 2008, violent flare-ups continue between the national army and militias operating in North and South Kivu and Oriental Province, all in the east. Tribal strife in the last year has also led to violence and the displacement of hundreds of thousands of people in Equateur Province, an area that had been relatively peaceful.

In the last dozen or so years, more than 5 million people have died because of the fighting and resulting assaults, disease and poverty in the Democratic Republic of Congo.

Rape has become an epidemic as all parties to the conflict have used sexual violence as a tactic of war. In recent years civilians have also increasingly been responsible for committing attacks. More than 15,000 rapes were reported in 2009, including 9,045 in the east, according to the U.N. Population Fund.

Wallstrom told members of the Security Council that she was haunted by what she heard on her trip. She mentioned a woman, nine months pregnant, who witnessed her husband’s murder and was then beaten and raped by five or six men. Her infant was stillborn.

"Women are still not safe, under their own roofs, in their own beds, when night falls," she said during her remarks to the council.

Despite the 2005 scandal over allegations that peacekeepers had sexually exploited Congolese women and children, many women’s advocates and humanitarian actors agree with Wallstrom that peacekeepers are contributing to women’s safety.

As of February 2009 there were nearly 1.9 million internally displaced persons in the Democratic Republic of Congo, according to the U.N. Office for the Coordination of Humanitarian Affairs. Celine Schmitt, external relations officer with the U.N. High Commissioner for Refugees in Congo, said peacekeepers help the U.N. reach those people by providing escorts through dangerous areas.

Peacekeepers’ road-building also helps women, said Schmitt. When there was no road between Goma and Kitchanga in North Kivu, women traveling from one village to another passed through a forest filled with roaming militias. With the road, Schmitt said, they are much safer.

Gogo Kavira, president of the Coalition of Women’s Associations for Development in North Kivu, had mixed feelings about peacekeepers and said they could do more to protect civilians. However, she said they play an important role in reminding Congolese authorities that their actions are watched.

"As an eye of the international community on the government, they weigh much," she said in a translated e-mail to Women’s eNews.

The International Rescue Committee, an aid agency based in New York City that assists people affected by armed conflict, does not use peacekeepers for security escorts because they are technically parties to the conflict, said Ciaran Donnelly, Congo regional director for the group.

However, Donnelly said peacekeepers’ provision of free flights around the country for humanitarian organizations were essential because of the country’s terrible record on airplane safety.

In her briefing to the Security Council Wallstrom also highlighted these patrols. Initially, few women followed the market escorts, she said, but confidence has grown.

"The improved sense of safety led to improved trade, which has contributed to economic development," she said.

Carolyn Badino, deputy spokesperson for the U.S. Mission to the U.N., said Security Council members are focused on reconfiguring the peacekeeping mandate, rather than pulling out entirely right now. She stressed that no decisions were yet final.

The U.N.’s peacekeeping force "plays a critical role in the protection of civilians and government security forces need greater capacity and reform before they can take over. There has been progress, but it is fragile," Badino said. "Any reconfiguration of the U.N. mission should be undertaken in a manner that does not undermine progress."

In a March report, U.N. Secretary General Ban Ki-Moon recommended that the mission be extended for another 12 months in some parts of the country and focus on strengthening national security institutions and the rule of law. Protection of civilians should remain paramount.

Amid greater stability in eight provinces–primarily in the generally peaceful west–the secretary general proposed withdrawing 2,000 peacekeeping troops from those areas by the end of June.

In Ban’s view, peacekeepers would shift to the Kivus and Oriental Province in the east and withdrawal would be based on certain conditions, including if ongoing clashes with armed groups can be contained, if national security forces can assume responsibility for law and order and if the state can effectively govern throughout these regions. All of this must also be accomplished while fully respecting international and human rights laws.

–Roger Buhendwa contributed to this report.

Danielle Shapiro, a freelance journalist based in New York City, has made two reporting trips to the Democratic Republic of Congo in the past seven months.

The United Nations Action Against Sexual Violence in Conflict:
http://www.stoprapenow.org/ 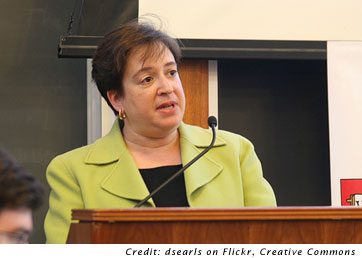 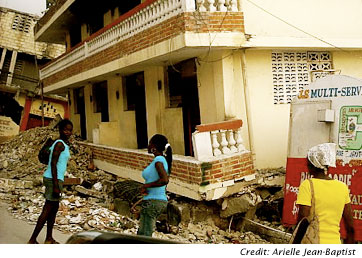