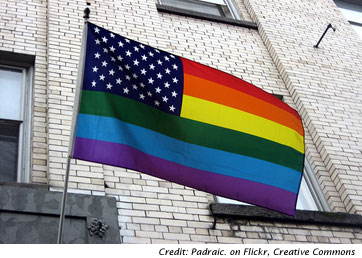 Four bills designed to curb discrimination based on sexual orientation are pending in Congress. Some advocates are hopeful, but others are more wary about hostile lawmakers and a lack of leadership by President Obama.

WASHINGTON (WOMENSENEWS)–Four bills pending in Congress would protect against discrimination based on sexual orientation in employment, schools, adoption and application for credit.

With health care reform completed, gay rights groups hope that lawmakers will now turn to these bills, with the legislation focused on hiring considered the most likely to pass this year.

But the question is how high to set their hopes.

Some lesbian, gay, bisexual and transgender, LGBT, advocates say their agenda has gained momentum from the passage of a federal law against hate crimes last fall and years of educating the public and lobbying members of Congress about the unique struggles of the gay community.

"We’ve already laid the groundwork," said Stacey Long, federal legislative director for the National Gay and Lesbian Task Force, an advocacy group with branches across the country that is tracking about 20 bills in Congress. The bills cover a broad range of areas from immigration to domestic partnership benefits.

"Any legislation affecting LGBT people remains a challenge to move forward in Congress," she said in a recent e-mail interview. "There are still many members hostile to our equality."

The White House recently drew praise from the National Gay and Lesbian Task Force and other LGBT groups for Obama’s executive order to protect hospital visitation rights for same-sex couples at institutions that receive Medicare and Medicaid funding.

"With this action, the government is taking a significant step toward recognizing our underlying humanity," said the Task Force’s Executive Director Rea Carey, in a statement.

But Jonathan Rauch, a guest scholar on gay issues at the Brookings think tank in Washington, shrugged off Obama’s agency directive to Health and Human Services, characterizing it as an impermanent gain that can easily be overturned by future administrations.

In an email interview, Rauch called the hospital visitation announcement "consistent with a strategy in which the president will take relatively low-cost steps on LGBT issues, but is going to be cautious about spending major political capital or seeming to drift too far left."

Skeptics such as Rauch want Obama to tackle controversial issues that necessitate legislative battles. A prime example would be repealing "Don’t Ask, Don’t Tell," the policy requiring gay members of the military to remain closeted or risk expulsion.

House Majority Leader Steny Hoyer, a Democrat from Maryland, acknowledged in a recent article in the Congressional Quarterly that the House was likely to vote this year on a decades-old bill that would prohibit employment discrimination based on sexual orientation or gender identity. Hoyer’s office did not return e-mails or phone calls for confirmation.

The bill, called the Employment Non-Discrimination Act, has almost 200 co-sponsors and is the likeliest of the four LGBT bills to become law this year. A Senate version of the bill has almost 50 sponsors, including Republicans.

Supporters of the bill cite a 2009 study, conducted by the National Gay and Lesbian Task Force and the National Center for Transgender Equality, that found the unemployment rate for transgender people is twice that of the general population.

A close second for passage this year is the Student Non-Discrimination Act. The bill would extend federal civil rights protections to gay and transgender students who face harassment in public schools. It would also give them legal recourse if they were bullied.

Hayley Gordenberg, deputy legal director for Lambda Legal, a gay rights group based in New York, called harassment of LGBT students "the bully’s choice of the day." The harassment can range from being stuffed into a locker to cases of death threats, she told Women’s eNews.

Rep. Jared Polis, an openly gay Democrat from Colorado, is the bill’s lead sponsor. It enjoys about 80 co-sponsors. Lara Cottingham, his communications director, told Women’s eNews that the sponsors’ goal is to include the bill in reauthorization of the Elementary and Secondary Education Act (formerly known as No Child Left Behind).

"We are also hoping to hold a committee or subcommittee hearing on this issue later this year," Cottingham said.

Sen. Al Franken, the freshman Democrat from Minnesota who took office after an extended recount and legal battle, hopes to introduce companion legislation to the Student Non-Discrimination Act in the current session, his office told Women’s eNews. A companion bill is part of the normal legislative process; if the Senate works on a bill in tandem with the House, it’s more likely to become law.

A third bill, the Freedom from Discrimination in Credit Act, would protect gay and transgender people from discrimination when applying for credit including mortgages, student loans or credit card transactions. The bill’s supporters do not point to research that shows significant numbers of LGBT people are denied credit. However, bill co-sponsor Rep. Steve Israel, a Democrat from New York, said in a press release that in tough economic times people shouldn’t "have to worry" that their sexual orientation or gender identity might affect their ability to qualify for a loan.

The Credit Union National Association, based in Washington, D.C., and Madison, Wisc., which represents about 90 percent of credit unions in the United States, recently endorsed the bill. The credit bill counts about 55 co-sponsors and was introduced by Israel and Rep. Barney Frank, an openly gay Democrat from Massachusetts who chairs the Financial Services Committee, which has jurisdiction over the bill.

The fourth bill, the Every Child Deserves a Family Act, bars discrimination based on sexual orientation, gender identity or marital status in adoption or foster care.

It gives legal recourse to LGBT adoptive or foster parents who encounter discrimination and threatens withdrawal of federal funding to agencies that don’t comply. It has almost 20 supporters in the House and is awaiting a subcommittee hearing.

The bill text refers to a 2008 study by the Evan B. Donaldson Adoption Institute, a nonprofit education and policy group headquartered in New York, that says that although gay and lesbian parents care for almost 80,000 children, one-third of child welfare agencies in the country still reject LGBT applicants.

Julia Marsh is a Washington, D.C.-based correspondent covering domestic and foreign affairs for a Japanese newspaper.

‘Sex and the City 2’ Extends Its Marketing Ploys