Women of faith recently joined secular feminists, social activists and philanthropists at a meeting in Dallas. Deborah Richardson says they came away resolved to put their collective spirit and financial power behind the sacred needs of women and girls.

(WOMENSENEWS)–We came together in Dallas and came away knowing that now is the time for the faith community to join in the global dialogue about investment in women and girls.

At United by Faith: Building a Better Future for Women and Girls, a conference recently hosted by the Women’s Funding Network, faith-based female leaders from across the country gathered with secular feminists, social activists and philanthropists. Together we explored pushing beyond and out of our individual silos, shared and heard each other’s narratives and rediscovered and claimed our collective purpose and power across faith traditions.

Goldman Sachs and Ernst and Young have both launched initiatives to harness the growing potential of women as business leaders. The United Nations has repeatedly stated–and put its resources behind its pronouncements–that women’s and girls’ full participation is crucial to global security.

Now it’s time for women of faith to congregate our power behind girls and women.

The early achievements of women’s philanthropy and the women’s movement in general in the United States largely grew out of the religious and spiritual beliefs of women who were guided by their faith into action.

As Daisy Khan, executive director of the New York-based American Society for Muslim Advancement, has said, "faithful women throughout American history have shaken up the status quo, bringing about the most remarkable examples of broad political and social change."

Working together, we are creating a social justice policy agenda that advances economic security and access to health care. And we are raising significant resources to fund that effort.

Katherine Henderson, president of Auburn Theological Seminary, touched on the strong potential for change being developed by this unique partnership in her keynote address at the Dallas conference.

"As the women’s secular social justice movement reveals more and more evidence for how the work of supporting women and girls is the key to unlocking so many of the most pernicious social ills, women of many faith traditions will be emboldened to act even if doctrine, text, ritual, historical wounds or practice might dictate otherwise," she said.

An example of how this kind of effort can maintain and foster the sacred rights of young women is A Future. Not a Past. This campaign, highlighted at the conference with active engagement from the faith community, is leading a statewide effort in Georgia to prevent and address the commercial sexual exploitation of minor girls–a growing problem across the country–and move girls from crisis to security.

The Women’s Funding Network is replicating this campaign, rolling out a program this spring for women’s funds in communities across the nation to copy the campaign’s successful model of collaborative, cross-sector partnerships aimed at preventing the sexual exploitation of children.

Speeding Up the Engines for Change

What other means can we use to accelerate our work toward achieving social justice? At the conference, discussions focused on both individual and collection actions. As women of faith and action, we often focus our energy outward on the task at hand and as a result don’t nourish ourselves enough to be truly effective change makers.

But as Layli Phillips Maparyan of Georgia State University shared in her workshop, "Spiritual Activism: a Womanist Approach to Social Change," we must nurture our bodies, mind and spirits in order to be the change we wish to see in the world.

Barbara Thompson, founder of the Global Village School, a school in Decatur, Ga., that helps teenage survivors of war and refugee camps get an education, also noted, "If the inner work is great, the outer work is never small."

The Rev. Dr. Claudette Copeland closed the conference with these final words of wisdom and affirmation: "You are on the right path, know your own authority, stick your breasts out and seek solace and support in your allies. You are not alone."

The conversation about investing in women and girls will be continued on a much wider scale during the upcoming Women’s Funding Network annual conference, which is being held in Denver from April 22-24. 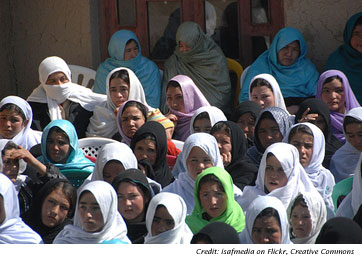 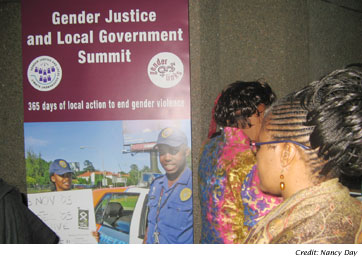