U.N. Security Council Resolution 1325 calls for women to be involved in peace talks. But Afghan women–after a series of setbacks–place little faith in that. They’re mounting their own push for inclusion at a spring meeting of national leaders.

To avert that, they are focused on the peace "jirga"–a gathering of traditional leaders–planned for this spring or summer.

Hundreds of women belonging to more than 70 women’s organizations are battling for more than quota-style representation at the upcoming jirga.

"Before the jirga we have to make sure the right women get into the process," said Nargis Nehan, director of Equality for Peace and Democracy, a civil society group working with women and young people in Kabul. "Women must not be there just as a women’s group, but must be represented through tribal groups, civil society groups, parliament, the private sector and government."

Nehan is also a representative to a regional peace commission set up a year ago by female peace activists in Afghanistan, Pakistan and India that has convened twice, once in Kabul and once in New Delhi.

"Will the right women be there?" asked Palwasha Hassan, a founding member of Afghan Women’s Network and country director of a Canadian funded pro-democracy group, in a recent interview.

Hassan was recently nominated by President Hamid Karzai to head the women’s ministry, but she was rejected by a parliament that appeared hostile to her liberal background.

Since the beginning of this year, architects of national reconciliation have increasingly assumed that negotiations with the Taliban are necessary to end a conflict characterized by intensifying fighting and spreading violence.

"The Taliban established a terrible record of violating human rights during their rule and they have done nothing since then to indicate they will act differently if they return to power," Zarifi said in a statement in January, issued ahead of a conference in London for donor nations and the Afghan government to discuss a new strategy for Afghanistan.

Similar deals with the Taliban in neighboring Pakistan, Amnesty said, led to increased human rights violations. Under successive deals in areas of Pakistan’s northwest frontier, ceasefires and government troops allowed Taliban forces to move in and occupy areas where they have banned girls’ education, banned music and instituted summary justice like flogging, beating and even executions for those who flout their restrictions.

In addition to planning a peace jirga, early steps toward national reconciliation include the institution of an internationally funded trust fund to pay off foot soldiers of the insurgent movement.

U.N. Security Council Resolution 1325 calls for the inclusion of women in any peace negotiation, but Afghan women fear little, or hollow, enforcement.

More international attention is being paid to whether insurgent leaders will be present at the peace jirga than whether women will find a place. Women, after all, pose no threat to security.

Only one Afghan woman, for instance–Arzo Qanih, a member of the Afghan Women’s Network–was invited to attend the London peace-planning conference in January.

"Women’s engagement is not an optional extra component of stabilization and recovery," Qanih told the gathering. "It is a critical precursor to success." In any negotiations, she said, women’s rights must be protected.

Afghan women face an increasingly insecure environment with a growing trend of violence against women in public life, according to a July 2009 report by the U.N.’s human rights office in Afghanistan.

Violence against women, the report found, was being perpetrated not just by anti-government forces, but also by "local traditional and religious power-holders, women’s own families and communities and in some instances government authorities."

In a December report, Human Rights Watch also flagged the weakening of women’s rights. "The insecurity Afghans face comes not only from the insurgency, but also from abuses by so-far untouchable government officials and warlords," the report said.

The Afghan government has promised that any peace treaty will respect the constitution’s guarantees of equality for women.

Since the 2001 ouster of the Taliban, women have entered the work force, joined electoral politics and taken jobs in the government.

Under the constitution, Afghan women have the same rights to voting, education and political participation as men. An article of the constitution mandates at least two female representatives from each of the country’s 34 provinces.

The shakiness of such provisions was highlighted in August 2009, however, when Karzai, backed by Parliament, signed off on a Shia personal status law that subordinates women. Provisions that required a wife to ask permission to leave the house except on urgent business and a requirement that a wife have sex with her husband at least once every four days were dropped amid local and international outcry.

But the law still permits husbands to deny food and sustenance to their wives if they refuse to obey their husbands’ sexual demands, grants guardianship of children exclusively to their fathers and grandfathers and requires women to get permission from their husbands to work, according to Human Rights Watch.

In February, a presidential electoral ordinance sought to reduce the representation of women in parliament from a minimum of two seats in each province of the country to a maximum of two seats. The final law restored the earlier, minimum, provision, but underscored the fragility of the gains women fought to be enshrined by the constitution, ratified in 2004.

Hassan’s rejection by Parliament adds to the unease.

Women’s activist circles have been buzzing over what they understood to be hostile questions Hassan faced in parliament, which gets little press coverage and for which there are no readily accessible record of proceedings.

In an interview with Women’s eNews, Hassan said members of parliament questioned her knowledge of Islam, whether she would enforce ‘hijab’ (head covering for a woman) and the need for ‘mehram’ (male escort for women traveling outside their homes) and whether she repudiated "Western" precepts on the freedoms of women.

She said the hostile questions also came from female legislators, one of whom asked Hassan why she had instituted shelters for battered or abandoned women, which the MP characterized as "places of ill-repute."

When Hassan was rejected by Parliament, the Afghan Women’s Network issued a statement calling it "very disappointing."

The Network has drawn up a list of demands addressed to the Afghan government and its international supporters. These include representation by women in the National Security Council and other bodies making decisions on peace and security; a share in the new trust fund for reintegration; and assurances that "reconciliation and reintegration will not take place at the expense of human rights."

Representation by women at these different levels is needed to ensure representation of women’s rights in all levels of policymaking, including development issues, the group said in a Jan. 29 statement.

On Feb. 3, the New York-based U.N. Committee on the Elimination of All Forms of Discrimination against Women–CEDAW–expressed regret about the exclusion of women from the London peace conference.

"Afghan women must be full and equal participants in decision-making at all levels in the process of peace building, reconciliation, rebuilding and development of their country," CEDAW said, calling on the Afghan government as well as its international allies to ensure this.

Aunohita Mojumdar is an Indian journalist who has reported on the South Asian region for 20 years. She has been living in Afghanistan since 2003.

One response to “Afghan Women Fear Violence in National ‘Peace’” 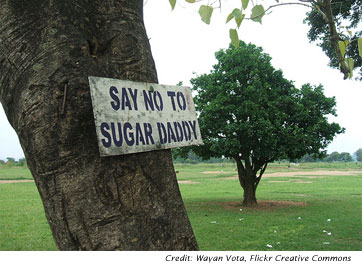