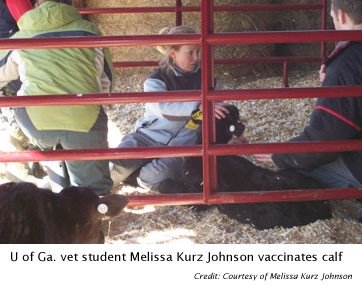 By 1986 enrollment in veterinary schools was about 50-50. But women have been in the majority every year since at all 28 U.S. veterinary colleges, according to the Association of American Veterinary Medical Colleges, based in Washington, D.C. In 2010, women take 78 percent of the seats in veterinary schools.

Dr. Sheila Allen, dean of the University of Georgia College of Veterinary Medicine, one of five female deans at U.S. veterinary schools, said the explanation is simple.

"Veterinary medicine is a career that has always attracted women," Allen told Women’s eNews in a recent interview. Once quotas and other intentional barriers were gone, she said, women quickly started to fill classrooms and clinics.

The flood of women into vet schools means that now female veterinarians slightly outnumber male counterparts, with 44,802 women practicing in 2009 compared to 43,196 men, according to the American Veterinary Medical Association.

Improvements in drugs and technology have also helped open the field to women, said Dr. Corrie Brown, a professor of pathology at the University of Georgia College of Veterinary Medicine.

For large-animal doctors especially, a veterinary practice is still a very physical job. But Brown, an expert on emerging diseases and agro-terrorism, said brute strength and "arm-strong anesthesia"–as in, you’d better have very strong arms to deal with calving cows and bucking horses–is less important due to advances in methods of providing medications.

Lisa Greenhill, associate executive director for diversity at the Association of American Veterinary Medical Colleges, said the field is among the most respected of occupations, yet greatly undervalued.

"Everyone loves their vet, nobody wants to pay their vet," she said. 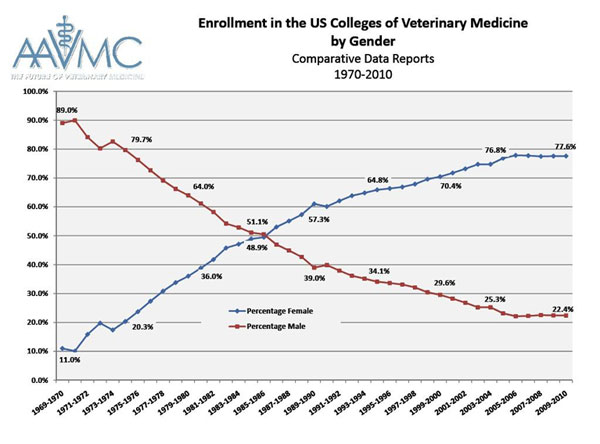 When U.S. working women are paid just 78 cents for every dollar a man earns, the feminization of this profession is a concern, said Greenhill.

Greenhill said vets are not only undervalued in pay, but also in the understanding of their critical expertise in areas such as public health, food safety and global disease transmission.

Shortly after the deadly anthrax letters started arriving at news organizations and on Capitol Hill after the 9/11 attacks, for instance, Greenhill recalls attending a meeting of medical and emergency strategists. She said no veterinarians were invited even though anthrax is a cattle disease.

As more women run their own veterinary practices, they may help to make offices more fair and flexible for female employees. But that hasn’t always been the case.

For pathologist Brown, it was tough going starting a family.

"I had my son when I was working in Louisiana. I went back to work two weeks later, never missed a beat," Brown said. "It’s the biggest regret of my life. I didn’t want them to have any reason to say, ‘She’s not pulling her weight.’"

But now lots of female practice owners "get it," said the University of Georgia’s Allen.

When it comes to starting pay, however, Allen says young vets have to watch out. 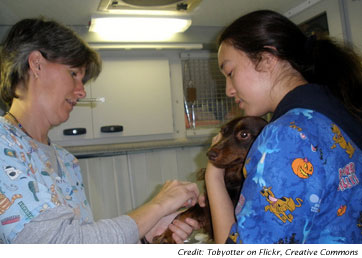 Georgia and other vet schools do have business classes.

"In my class when we have Q and A, the men would always pop up with the less PC questions like salary," said University of Georgia vet student Koren Moore Custer. "I think that has a lot to do with gender."

Melissa Kurz Johnson, also a University of Georgia vet student, said money is not her leading criterion. "If one position paid more but you didn’t like the atmosphere as much or the people as much, I would choose the more constructive environment," she said.

Jessica Murdock, who graduates from the University of Georgia vet school in 2012, is interested in studying zoonotic diseases, those that can be transmitted to humans from animals. "There’s a real shortage of food animal specialists and wildlife disease researchers," she said.

Veterinary ophthalmologist Dr. Sue West, who practices near Toronto, Canada, has performed cataract surgery on elephants and snow leopards and corneal surgery on a moray eel.

She earned her degree in 1975, one of nine women in a graduating class of 63 at the University of Minnesota Veterinary Medical College in St. Paul, Minn. She remembers getting no encouragement for her career choice and occasionally open hostility from male classmates.

West welcomes the more level playing field for women now. She also sees generational changes, not necessarily tied to gender, as big advances in the field. These include improved treatment of laboratory animals, recognition and reporting of animal abuse and broader environmental awareness.

"A lot of those humane concerns come from a younger generation saying, ‘No, I’m not willing to do that, let’s find a better way," West said in a recent phone interview. "Young people are more willing to look at different options."

West said the work is highly rewarding. "Veterinarians have a high degree of satisfaction for their work, we really like what we’re doing."

Marsha Walton covers science, technology, environment and space issues. She was a producer for CNN’s science and tech unit for more than 10 years. Her work has also appeared on Mother Nature Network, Appalachian Voices, the National Science Foundation, Working Mother, and Milwaukee Magazine. 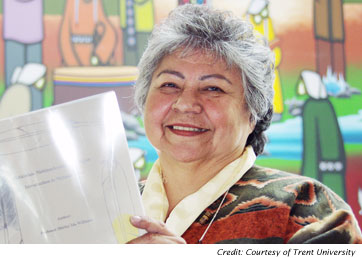