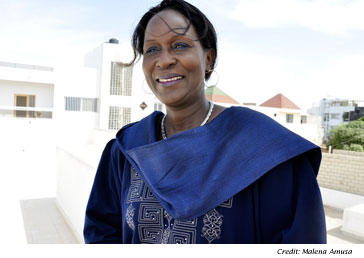 For Peacemaking, Senegal Has Just the Woman

One of Senegal’s leading lawyers has mediated labor strikes and defused election violence. Her name is Amsatou Sow Sidibe and Malena Amusa thinks she’s a major reason why Senegal is relatively peaceful compared to neighboring Guinea.

(WOMENSENEWS)–When the Guinea massacre rocked the West Coast of Africa last September, I happened to be in the region, right next door in Senegal teaching English.

The military attack on a 50,000-strong citizen protest in Guinea’s capital Conakry against Capt. Moussa Dadis Camara–a military leader who came to power through a coup in 2008–claimed at least 157 lives and wounded hundreds, including roughly 100 women who were raped and sexually assaulted, human rights groups have reported.

The gruesome news made me wonder if something similar could happen in Senegal, where public disapproval of President Abdoulaye Wade is high, stoked by actions such as spending $27 million on a 160-foot statue of an African nuclear family in a country mired in poverty.

Like Guinea, the world’s leading exporter of the aluminum ore bauxite, Senegal is a key port of international trade, moving big shipments of fish, peanuts and petroleum products. But the economies of both countries fail to spread much wealth, with half the population of both nations below the poverty line, according to the World Bank.

Both countries are former French colonies and predominately Muslim. The questions of human rights are constantly strained by the push-and-pull of French law, democracy, traditional African values and the Quran.

In Senegal, I felt that the pressures exerted on many individuals–whether it was women who couldn’t get a divorce in less than five years or people down to one meal a day–could produce the kind of breaking point that occurred in Guinea.

But despite this potential and the many similarities between Guinea and Senegal, there is a big difference–Senegal is peaceful, relatively so. I think a huge reason behind this is one woman I got to know well: Amsatou Sow Sidibe.

Fifteen years ago, Sidibe, a lawyer and one of Africa’s most vocal human rights activists, co-founded the African Network for the Promotion of Women Workers, based in Senegal’s capital Dakar.

The group, with branches throughout French-speaking Africa, focuses on training women in job skills and the law. In Wolof, the dominant language of Senegal, the group is called Rafet, which means beautiful.

Sidibe is also the director of the Institute for Human Rights and Peace at Cheikh Anta Diop University, also known as the University of Dakar. The institute promotes human rights values through forums and programs.

But beyond any specific program, title or credential, Sidibe has assumed the open-ended project of trying to guide her country toward a new era of peace.

"Senegal is peaceful, but we need a more perfect peace," said Sidibe, 56.

For three months, I was her English coach and our verb exercises were constantly charged by lively discussions of Senegal’s politics and her methods of stopping trouble in its tracks. The more I got to know her, the more I began to suspect that she could be a big part of the difference between an imploding democracy on one hand, and relative peace on the other.

A primary example of her peacemaking power occurred in 2007, when Senegal was embroiled in a national presidential election dispute and members of some political campaigns threatened reprisal against opposition factions. Fearing bloodshed, students at Cheikh Anta Diop reached out to Sidibe, who organized a massive gathering in a stadium on campus.

She invited rappers, young people, government ministers and religious leaders The crowd, Sidibe told me, numbered beyond 5,000. Together, students and professionals took turns pleading for peace. Word of the event and posters for peace spread around the country. In the end, the election avoided bloodshed, Sidibe said, putting a finger to the table and smiling.

Another example of her diplomatic finesse occurred last fall, in the north of Senegal, where 84 men and women working for a mega-seafood merchandiser escalated their protest. They claimed they had worked for five years without compensation and were owed millions of dollars. Seventeen of the women went on a hunger strike; they lay on mattresses for days in the bullying heat of a malaria-struck region.

Forty-four days into the strike, amid national news attention, Sidibe visited the scene to mediate the stand-off. Instead of taking the strikers’ side, she prevailed upon the women to end their fast. "Help us help you," she told them. "Your children need you. Who will care for your offspring? If you stop, together we will lead the fight."

The women still haven’t received the money they asked for, but Sidibe’s women’s workers network helped the crisis land in the hands of the government ministry. Later, when Sidibe returned to Dakar, many civil leaders congratulated her on preventing a potential death swamp in the north.

Many others also celebrate Sidibe inside Senegal and the region. Her law classes attract 1, 000 students. Journalists seeking her comments and views for political stories keep her phone ringing.

Part of Sidibe’s success is her flexible way of handling tough situations. When talking about the Muslim practice of marrying multiple wives, for example, many women’s rights activists take a strong stand against polygamy. They see it as destroying a woman’s self-esteem and causing financial dependence.

However, instead of trying to ban polygamy, which is controversial but legal in Senegal, Sidibe tries to make peace with the practice. In a national magazine interview she suggested that polygamy be promoted in cases when a man takes up a mistress. At least that way, she reasoned, a man could keep the relationship out of the shadows and help the woman secure authority over property, children and finances.

To amplify her human rights efforts, Sidibe has begun coordinating a national social movement focused on improving public education, governance and human rights. The next presidential election is in 2012 and already some of the president’s loyalists are promising to deliver violence to opponents of Wade, who turns 84 this year.

Could Sidibe rise as an opposition figure by then? Her popularity and importance in the country is enough to give me hope.

One response to “For Peacemaking, Senegal Has Just the Woman” 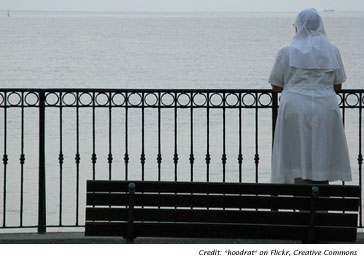 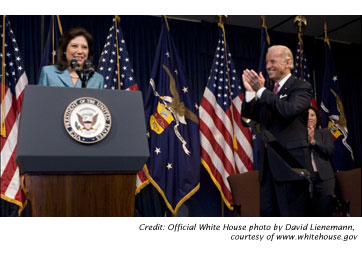