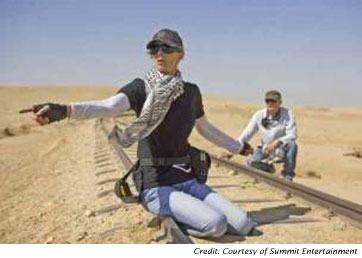 The day of golden statuettes is coming and Jennifer Merin is fed up with the media’s fixation on the story of Kathryn Bigelow vying with ex-husband James Cameron for the best director Oscar. Let’s stop treating a director as someone’s ex-wife.

(WOMENSENEWS)–March 7 brings us the Academy Awards and a chance to see Kathryn Bigelow become the first woman to win a best director Oscar.

"The Hurt Locker," Bigelow’s taut drama about U.S. soldiers deployed to defuse bombs in Iraq, transcends its action-thriller genre to tell a compelling tale about the effects of war on the human psyche.

If you haven’t seen "The Hurt Locker" yet, you really must. Consider it a civic duty. It’s still in theaters and already out on DVD.

The movie has earned nine Oscar nominations, including one for best picture. It’s ranked No. 1 on Movie City News’ critics’ top-10 scoreboard. The Alliance of Women Film Journalists (where I’m president) has given the movie five awards.

Bigelow, well-respected for directing "k-19: The Widowmaker" (2002), "Blue Steel" (1989) and other mainstream movies, is the fourth woman to be nominated for the best director Oscar. On Jan. 30 she became the first woman to win the Directors Guild of America’s top award

She’s up against four men: James Cameron, Lee Daniels, Jason Reitman and Quentin Tarantino. Their films–"Avatar," "Precious," "Up in the Air" and "Inglorious Basterds," respectively–are also nominated (along with five more) for best picture.

As we approach the day of golden statuettes, mainstream media is making much of Bigelow’s former marriage to Cameron.

Too frequently, this means Bigelow is described as Cameron’s ex-wife.

On the rare occasion when he’s referred to as her ex-husband, I’m still not happy. Where in the qualifications for best director is ex-mate listed as relevant?

This is all-too-typical sexist tabloid hype and tripe distracts from the comparison of the two movies. And when it comes to artistry, interesting comparisons can be made between Bigelow’s film and Cameron’s "Avatar."

Rife with blood, sweat and grit, "The Hurt Locker" is a gripping story of our immediate times. It’s about combat soldiers who could be my next door neighbors, and I care about them.

"Avatar," by contrast, is considered obligatory viewing for anyone keeping up with movie-making technology, and the film has set records for ticket sales. But what is it really? It’s an animated effects-laden sci-fi fantasy about human scientists who submerge themselves into pseudo bodies to commune with an alien species, while greedier humans occupy and exploit the alien species’ fictional planet. It’s a captivating, predictable fable that’s sometimes obscured by the full-on effects.

Between these two directors, it’s probably obvious that I’m in Bigelow’s corner. But not because she’s a woman who’s busted through Hollywood’s celluloid ceiling. I love her movie and think she’s done the better job of directing the better film.

Back to This Month’s Run

Now let’s get on with next month’s new releases, which include a batch that focus on the younger set.

March 5 offers a spectacular version of "Alice in Wonderland," in which Lewis Carroll’s audacious little girl, now 19, returns to the scene of her childhood adventures to take on the role of heroine in her old friends’ mission to end the Red Queen’s reign of terror. Working in IMAX 3-D, Tim Burton directs a screenplay by Linda Woolverton, known for penning "The Lion King" (1994) and "Mulan" (1998). Young "someone to watch" Mia Wasikowska stars as Alice, along with Helena Bonham Carter as the demonical Red Queen, Anne Hathaway as the White Queen and Johnny Depp as the Mad Hatter.

(As a business aside, Disney, the distributor of "Alice," is angering European cinema operators by planning to release the DVD 13 weeks after the theatrical opening, versus the usual 17 weeks, according to the Financial Times, which reports the cinemas could be mulling a boycott. So European readers, look out for that.)

March 12 brings the limited release of "The Exploding Girl," in which Zoe Kazan stars as a young woman with epilepsy who is struggling to reconcile her feelings for a new college boyfriend and her longstanding best male pal.

On March 31, director Julie Anne Robinson’s "The Last Song" stars Miley Cyrus as a rebellious teen sent to spend the summer with her estranged father in a Southern beach town. Nicholas Sparks co-wrote the screenplay from his bestselling novel. If Sparks lights your fire, this film’s for you. Frankly, I find him sappy.

Of the month’s more adult fare, the standout is "Mother," a South Korean film (with subtitles) opening theatrically March 12. Writer-director Bong Joon-ho’s gripping crime drama is about a woman who desperately tries to clear her mentally disabled son of a murder charge by finding the person who actually killed the young woman. Actress Hye-ja Kim’s performance is emotionally fraught and magnificent. A must-see distributed by Magnolia Pictures.

Toni Myers is among the female directors with a film coming out this month. She directs the spectacular IMAX documentary, "Hubble 3-D," which releases March 19. It chronicles the challenges of astronauts aboard the space shuttle Atlantis who are sent to repair the Hubble Space Telescope.

Nora Twomey and Tomm Moore co-direct "Secret of Kells," an indie animated feature that grabbed a surprise 2010 Oscar nomination for best animated feature. It releases in New York on March 5, Boston on March 19 and other cities in April. The feature is about a lad living in a Celtic abbey whose adventures lead to the creation of the "Book of Kells," the 1,200-year-old illuminated manuscript.

Massy Tadjedin writes and directs "Last Night," a dramedy opening March 19 about a married couple who, separated for one night, are challenged by possible romantic encounters. Kiera Knightly and Sam Worthington star.

Elizabeth Allen directs "Ramona and Beezus," co-written by Laurie Craig and Nick Pustay, which opens March 19. Based on Beverly Cleary’s beloved children’s books about the misadventures of grade-schoolgirl Ramona, this is a good bet for a mother-daughter movie date.

Here’s a batch of female screenwriters with work coming out next month.

Sarah Thorp’s "The Bounty Hunter" opens March 19, the same day that Jackie Filgo and Jeff Filgo’s "Diary of a Wimpy Kid" opens. Erin Cressida Wilson and Anne Fontaine pen "Chloe," a thriller opening March 26, in which Julianne Moore plays a doctor who sets out to test her marriage. Jennifer Jason Leigh’s "Greenberg," in which she also stars with Ben Stiller, opens on March 26 too.

Cressida Cowell’s "How to Train Your Dragon" is a Dreamworks animated feature that opens March 26 about a Viking boy who sets out to slay dragons, but winds up with one as a best friend.

However, none of the female writers involved in March’s openers get any time in a film opening March 12: "Tales from the Script." This terrific documentary about writing for the screen interviews 46 highly accomplished screenwriters. Only five women, however, are interviewed: Allison Anders, Jane Anderson, Naomi Foner, Guinevere Turner and Kriss Turner.

"Tales from the Script" shows the glaring scarcity of women in screenwriting. But let’s leave that for another column. 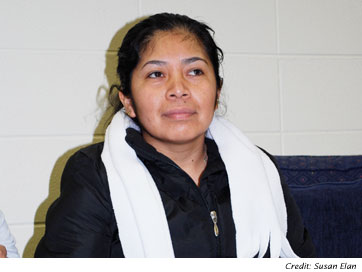 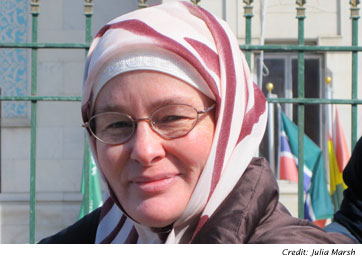