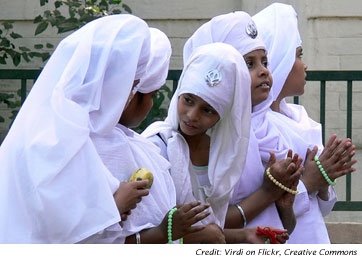 Widows of Sikh men massacred 25 years ago in the aftermath of Indira Gandhi’s assassination say India has failed to produce a single conviction in the case of at least 3,000 killings.

NEW DELHI (WOMENSENEWS)–As you enter the C-Block of Tilak Vihar in the Western part of the Indian capital city, the noise hits you first, then the stench.

Here tiny apartments are jammed together. Outside are open sewers. Inside, each apartment consists of a 6-by-8-foot bedroom, 3-by-4-foot kitchen and 3-by-3-foot bathroom.

None of this is exceptional in India’s poor neighborhoods, as last year’s runaway Hollywood hit "SlumDog Millionaire" showed.

However, there is one critical difference in this place: the complete absence of older men.

The government built the C-Block after 1984, when two Sikh bodyguards assassinated Prime Minister Indira Gandhi, prompting riots and murderous mobs to burn houses, businesses and places of worship in Sikh communities across the northern part of the country.

Sikh men, easily identified by their turbans, were targeted and murdered. Some women were killed, but many more were raped and left behind, along with their children. The government built this Widow’s Colony for them.

One resident, Harsharan Kaur, 64, lost her husband and young son in riots in Trilokpuri, a neighborhood in the western part of New Delhi that used to be a Sikh stronghold. Her name, along with all names in this story, has been changed because of ongoing litigation.

She tells the kind of story that is prevalent here.

"My husband who ran a small motor mechanic shop was dragged out of the house," Kaur recently told Women’s eNews in Punjabi, in her apartment. "A tire was put around his neck, his hands tied and then the tire was lit. The event came like whirlwind and destroyed everything I had."

She did get some compensation from the government, about $2,000

But what she and others in the colony say they truly desire is justice.

Many of them used to live comfortably on the middle- or upper- incomes of their male relatives.

While they have struggled to put their lives back together after the trauma of the killings, they have lost their chief breadwinners.

The jobs they have found teaching, providing domestic help, working for the group that administers affairs in the colony haven’t reclaimed their former ways of life.

Meanwhile, the perpetrators have gone free.

Since November, 1984, when the first commission was created, 10 official commissions have been set up to investigate the carnage.

Aside from some minor convictions, residents here say not a single politician, police officer or anyone else has been convicted.

Many residents of the Widow’s Colony say that such a systematic attack on one community is not possible without the support of the government. They point to the refusal of police in 1984 to register initial complaints and suspect that public officials have destroyed evidence.

In March, 2009, the country’s Central Bureau of Investigation cleared Jagdish Tytler, a ruling party candidate at the time of the riots who victims allege helped instigate a crowd in New Delhi to carry out arson. After widespread protest to the decision, the Congress party decided not to field him as a candidate.

In September, the Congress government announced a package of Rs 715 crore (about $143 million U.S. dollars), which has yet to be disbursed.

Meanwhile, the absence of an entire generation of men in the Widow’s Colony serves as a constant reminder of what occurred 25 years ago.

"My son was just 4 years old when the riots happened. But even then it had a deep impact on him," said Gursharan Banga, 50. "After the riots he used to say that he will become a terrorist when he grows up, so that he kills the people who murdered his father."

Under her care, however, her son’s life did not turn out that way. She is today proud of the fact that her son is working for a multinational Internet technology company.

Such stories, however, are as rare as winning a million dollars on a TV quiz show.

What was supposed to be a safe refuge is riddled with crime, prostitution and addiction.

Every resident here seems to have a harrowing tale to tell a visiting journalist. And most end with a request for money or help.

"I was just 7 years old when the riots happened," said 32-year-old Sarabjeet Singh, who says he overcame drug addiction a few years ago. "My mother tells me that I wasn’t able to talk coherently for a long time after that. I started stammering and became very quiet."

Singh, who used to live in Trilokpuri with his family, says he saw his father, a mechanic who owned his own shop, get pulled by his hair, dragged outside the house and set ablaze before his very eyes.

He and his mother, Harsharan Kaur, 56, somehow managed to escape the rioters and later ended up at the Widow’s Colony. His mother works as a domestic helper.

"The anger that I feel for the murderers of my father and uncle can never be compensated with money," said Singh. "My life is totally destroyed. Today I drive an auto rickshaw to earn a living."

Pappi Kaur, 55, lives in the Widow’s Colony with her aging aunt.

"We were residents of Trilokpuri before the riots and led a fairly good life," she said. "After the riots I was offered a job by the government, but the pay was so miniscule that there was no point traveling so far for it."

Instead, she makes a little money tutoring school children.

Gagandeep is a New Delhi-based development journalist who writes mainly about gender issues. She is a member of the Sikh community and has relatives who suffered because of the 1984 riots. She is not related to anyone in the Widow’s Colony. 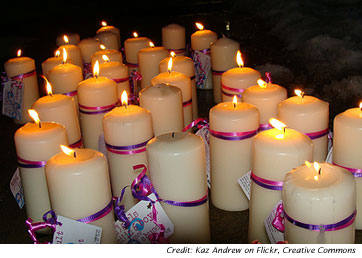 Streets May Be Safer, But Relationships? Not 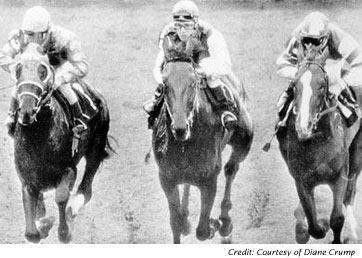