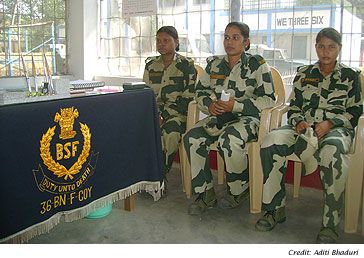 Indian women have made history since September by holding combat positions along the country’s difficult border with Bangladesh. Some of the new recruits say it was tough getting the job, but so far they like the work.

It is a quiet and picturesque spot in the southern region of the eastern Indian state of West Bengal.

But Rita Chakla, 23, is not there for sightseeing. That’s obvious by her military fatigues.

Chakla, and some 500 young women with her, made history in September by becoming the country’s first female combatants in the Border Security Force or BSF.

Now she is among 31 female constables stationed to the South Bengal Frontier, policing the Indo-Bangladesh border, which passes through heavily populated villages that contribute to a steady movement of people and goods, much of it illegal.

Because men are frequently apprehended by the security personnel, especially when security was heightened after the November 2008 terrorist attacks in Mumbai, women are being increasingly used for smuggling goods and fake currency notes.

In 2009, 147 women were held for smuggling fake Indian currency across the border, which helps explain the presence of the female border security forces.

Women’s eNews recently interviewed about a dozen of them to find out about their work and how they liked it.

Their days begin at 4 a.m. and they report to their posts with their rifles ready at 5.30 a.m.

So far, the women are not posted on night duty, although they can be woken in case of an emergency to help check any women who have been apprehended.

Their work entails inspecting women who want to cross the border and looking out for any trying to steal their way across. The combat part of the job surfaces when a woman flees, requiring them to pursue and physically apprehend her. They can also retaliate if the Bangladesh Border Patrol, on the other side of the border, opens fire.

New recruit Shrabanti Haldar, 22, said since she started the work in September, she has discovered a Bangladeshi woman trying to smuggle out Phensidyl, a popular intoxicant. "She had the bottles strapped to her thighs and it required women to frisk her and have her strip," she said.

Haldar also found another woman trying to smuggle saris by wearing a number of them on top of each other.

Once they apprehend such women, the security forces take them to senior staff in border security. They in turn deliver them to local police or border customs officials.

Putul Murmu, another female constable, described apprehending a mother-daughter duo from Bangladesh who were trying to cross into India without valid documents. Many of the women who engage in such smuggling and criminal activities are extremely poor.

But Haldar, the daughter of a carpenter and the eldest of three sisters, said she had no sympathy for the women they stopped.

"No, not at all," she said, her eyes hardening. "Many of us have had hard lives, but we have been law-abiding."

A recent government report found more than 10 million Bangladeshi migrants live illegally in India and many get there by finding their way across this border.

Counterfeit Indian currency is printed in Bangladesh and smuggled into India. Smuggled goods from India, including cattle, flow in the opposite direction.

Advocacy groups here also find the Indo-Bangladesh border rife with human traffickers who smuggle Bangladeshi children, many of them girls, along a route through India and often on to Middle Eastern countries.

Chakla said she applied for the dangerous, nontraditional work "for the challenge of it."

Chakla said she got the idea when she saw a male cousin prepare for a border security posting. "He tried hard but failed," she said, referring to the written test required for the posting. "But I was by his side during his trials and I got interested. He told me when the BSF advertised for female recruits and I got interested. My cousin helped me out with the application."

Chakla, a native of the district of Midnapore in West Bengal state, said her mother was doubtful about the job but she was encouraged by her father, a farmer, as well as her cousin.

Murmu, 22, the daughter of a railway staffer, had a harder time overcoming her family’s resistance. Once she cleared that hurdle she faced the problem of surviving the fitness test and training period.

In the fitness test, the women have to run a distance of 800 meters within four minutes, complete a 3-foot high jump and a 9-foot long jump.

During their training they have to learn to shoot a rifle, achieve a running speed of 3.2 kilometers in 17 minutes and jump over 9-feet long ditches, among other feats. An oral exam and medical tests follow.

The work, Haldar says, is "thrilling" and reminds her of a popular TV show about Kiran Bedi, a policewoman.

"Bedi had been my ideal and I wanted to be like her. Since childhood I had wanted to do something for my county," she said. "This is a great opportunity to serve my country."

Aditi Bhaduri is a gender consultant and a journalist based in Kolkata and New Delhi. 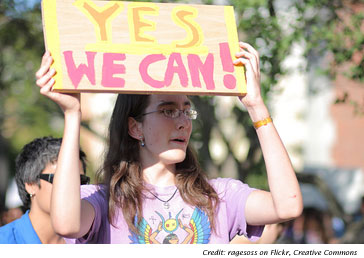