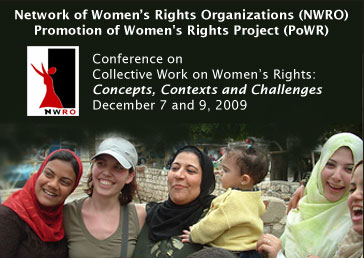 WOMENSENEWS–The veils are everywhere in this metropolitan city, where once they were rare. Conservative Muslims remain in power in Iran and in Turkey, two previously proudly secular nations, and religious conservatives are exerting more political muscle throughout the Middle East. Afghanistan is in danger of falling to the Taliban again.

In this era of Islamic ascendancy, which way should women’s rights activists go? Secular or religious? Islam or CEDAW, a United Nations treaty. Should they pay obeisance to Islam or push forward on the premise that women are citizens with full rights and responsibilities as described in the U.N.’s Convention on the Elimination of All Forms of Discrimination Against Women, signed by 98 nations, including most throughout this region.

These are the dilemmas repeatedly expressed by women’s rights activists as they gathered here to discuss how best to build networks of cooperation among women’s organizations. The agenda for the conference, sponsored by the Egyptian government and GTZ, a development arm of the German government, focused on methods of building effective networks among women’s groups to change biased laws and discriminatory practices.

At the heart of every conversation and presentation, however, was how to build movements for change in nation’s with long histories of interpreting Islam to restrict women’s rights.

Progressive interpretations of Islam are the way forward, argue some. No way others said with equal certainty, women’s advocates must remain secular and rely on international treaties such as CEDAW and other human rights documents. To do otherwise would be to concede that Islam and other religions have to right to rule civic life.

The debate was often the subtext during the presentations on how to build national and regional networks to make changes to discriminatory laws and practices.

Mawra Sharafeldin described the decisions she made as she assisted in the development of a network of women’s organizations in Egypt to change the nation’s laws regarding informal marriage. Eventually an umbrella organization with 11 members, her network, Sharafeldin said, confronted two distinct yet related issues, polygamy and inheritance. Both could be challenged as anti-Islamic or as violations of international human rights treaties.

The opposition to polygamy was unanimous throughout the network’s membership but any changes to the customary financial terms of marriage and inheritance failed to gain widespread support. The organization eventually decided that since members of the network were united in their opposition to polygamy, each member could decide whether to mount its argument on the basis of Islam or international documents, but that all would confront it.

"Most personal status law in the Arab world is based on jurisprudence and Sharia, said Sharafeldin. "Some groups threatened to leave our network if we did not refer to Sharia. So we chose international human rights law and enlightened Sharia as our reference. This was our compromise and challenge."

The problem the network faced next was defining what enlightened Islam means. And what does equality mean within that? Doing away with the notion of a wife’s obedience to her husband encountered violent opposition from members. Inheritance was so taboo that the discussion became "sharing wealth."

In some parts of rural Egypt, communities are so conservative that the international human rights conventions "can’t even be talked about" she said.

Relying on religious arguments might be okay in rural Egypt, argued Singh Sikand, a law professor from Bangalore, India. But using interpretations of Islam on behalf of women’s rights was next to impossible in India because within the Muslim community there, 200 million strong and the largest outside Indonesia, had many sects and each had its own interpretation of what Islam required of women.

"Some of these are actively involved in promoting girls’ education (seeing this as mandated by Islam) and in social reforms, critiquing certain anti-women practices that they regard as un-Islamic," he said. Other groups are "extremely conservative" and insist Muslim women veil themselves completely, remain bound in their homes and be subservient to their husbands.

Winning more rights for women based on many accepting a pro-women’s rights interpretation of the Koran was not feasible. Instead, he argued, the bias all Muslims face in India must be addressed for the status of Muslim women to improve.

The debate on how to work for women’s rights in Islamic nations continued during the discussions of confronting polygamy, unfair personal status laws and FGM.

"In my opinion, the law should never be based on religion," argued Codou Bop from Women Living Under Muslim Law. "The religious reading or interpretation of women’s rights is never positive or progressive."

In her country, Senegal , where the population is estimated to be 94 percent Muslim, family law was reformed in 1973. The law permits couples to choose whether they enter a monogamous or polygamous marriage contract. Those who fail to specify are assumed to have license for polygamy even if they are Christian.

"The presence of a choice looks progressive," Bop told Women’s eNews. "But in reality there are problems."

One of them is that men from conservative families persuade their brides to marry under the polygamous code to appease their parents while promising monogamy. Four years later, things change. A second wife stands by the side of the first simmering with betrayal, she said. Meanwhile, the law discourages divorce.

A representative from Syria explained how religion mediates discussions about birth control.

"Whenever we talk about family planning and reproductive health in Syria," said Thanaa Al Sabaa from the Damascus-based organization Syrian Women Observatory. Islam and religions are invoked to resist change."

In Syria, Islam is the state law although religious courts exist for minorities with different marriage practices such as Christians and Druzes. Despite a court system that reflects the country’s diversity, mixed marriage couples and children are often left in legal limbo on issues such as custody and inheritance.

When the time came for activists to join hand to reform family law in Egypt, The New Woman Research Center had to make serious compromises to bridge the gap between secularist and religious feminists.

"The argument Islamists always make is that we don’t see the reality," said Yousry Mustafa from GTZ." Look at the reality, they say: ‘women are veiled.’"

"The predominance of religious thinking putting pressure on the government," said Chadia Belhadi from Morocco. "

""Even if we need radical change, partial change is not bad, because there is suffering on the ground" said Dima Dabbous-Sensenig director of the Institute for Women’s Studies in the Arab World at the Lebanese-American University in Beirut.

Solving custody law, she added as an example, means many women who face abuse would be freed to divorce without fear of losing custody. But in Lebanon, which faces ongoing sectarian problems and lives under religious laws, can you address women’s rights without having settled these differences first?

"When we talk about religion the connotation is that religion is rigid," said Dalia Salah from the New Woman Research Center in Egypt. "But this is not the case. Our job is to create a common ideology, not to fall into bipolar ideologies."

The FGM movement, based on the dissemination of scientific research and information at the grassroots level is widely considered a successful campaign by women’s rights activists at the conference and studied as a potential model for campaigning on personal status laws in countries ruled by religion.

Marie Assad said the FGM Task Force succeeded in EGYPT because religious leaders were presented with scientific information on the damages of the practice. She says the campaign succeeded because it had a clear goal. Human and women rights in this context were put above arguments of religious and cultural specificity.

In Kenya, another success story, alternative rites of passage were introduced with the encouragement of U.S.-based Equality Now. And yet, the decades-long war on FGM Is not won. Mass circumcision ceremonies were planned in Kenya last month even though the Children’s Act, passed in 2001, specifically prohibits FGM for girls under 18 years of age, said Taina Bien-Aime from Equality Now. 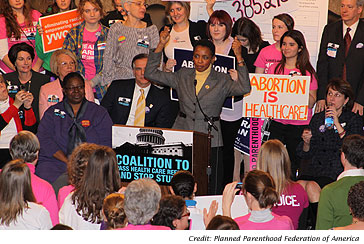 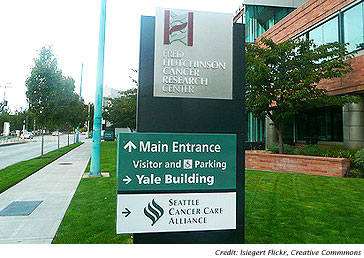