What’s in Your Womb? Pre-programming for the rest of your life, that’s what.

Do you have heart disease, high blood pressure, diabetes or high cholesterol? Like many people, you’re probably thinking that your diet, exercise (or lack of it), or weight play a significant contributing factor. And they likely do. But there’s something else to consider. Are you ready? Here’s the 64 million dollar question: Were you a low-birth weight baby?

Did you know that being a low birth weight baby could make you more susceptible to having heart disease or high blood pressure 40 or 50 years later?

This amazing nugget relates to a new discovery in epigenetics, called fetal programming. Fetal programming refers to the process whereby a stimulus or insult at a critical point in fetal development creates permanent changes in the structure and function of the baby’s vital organs, leaving lasting or even lifelong consequences for health.

The idea of fetal programming was first introduced by Dr. David Barker and his colleagues at the University of Southampton in England. Barker and his team made a connection to poor fetal growth inside the womb (which resulted in low-birth weight) and coronary heart disease, diabetes, high blood pressure, diabetes, high cholesterol and a many more chronic adult illnesses later in life.

Barker hypothesized that similar to programming a computer, a baby’s heart and other vital organs are actually "programmed" inside the womb. If something negative happens during pregnancy then those organs may not get the proper programming and never fully function at their best over a lifetime.

It’s an amazing way of thinking about the long term effects of pregnancy beyond just what happens at delivery. It was one of the many Aha! moments I had last week, as Dr. Michael Lu, from UCLA, presented on the Life Course Perspective as part of the Women’s eNews Black Maternal Health Conference (click here to watch the webcast)

Lu discussed the "Barker hypothesis" and showed that although it was initially met with some skepticism in the scientific community, over the past decade more and more scientific evidence is building to support this idea.

The point is, so much is happening in the womb that affects your baby not just at their birth but for the rest of  life. And if we really want to prevent obesity and heart disease in children and adults, then we have to go back to the womb and make sure those organs are properly optimized from the start.

Learn more about what you can do to prepare your womb for optimal fetal programming by reading Dr. Lu’s book.

2 responses to “What’s in Your Womb? Pre-programming for the rest of your life, that’s what.” 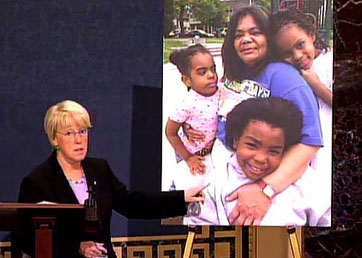